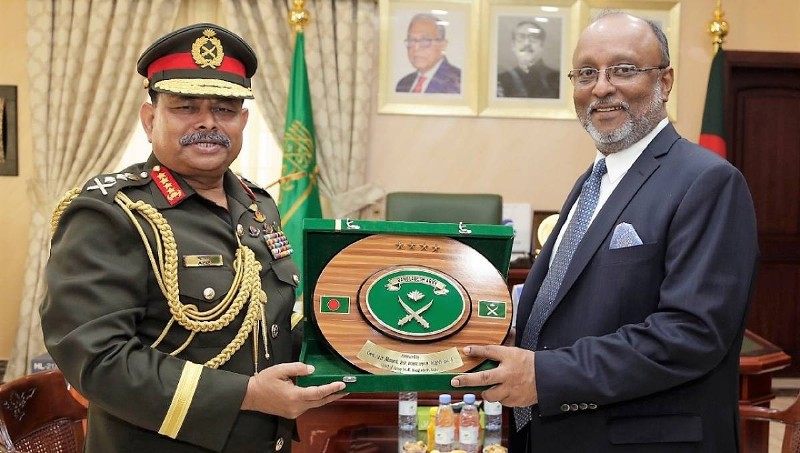 In a bid to please her colonizing master America, (Awami League) AL government has decided to send some 1,800 Bangladeshi troops to the southern provinces of the Kingdom of Saudi Arabia along the border of war-torn Yemen. Chief of Army Staff Gen. Aziz Ahmed disclosed this news while visiting the newly constructed chancery of the Bangladesh embassy in Riyadh on February 3, 2019 and said that both the countries were set to sign a defense pact on February 14 to further bolster military cooperation (The Daily Star, February 05, 2019). It seems obvious that Hasina government is eager to support another criminal agent of her master – the usurper of the two Haramain – and her agendas in the struggle for power and wealth in that region as the Bangladesh Army chief also named four military officials, including a brigadier general, to be joining the notorious Saudi-led Islamic Military Counter Terrorism Coalition (IMCTC), which was formed only to engage in America’s proxy wars and “War on Islam”.

Even though this treacherous Awami League government initially ruled out any military support for IMCTC during its formation back in 2015 due to the fear of popular discontent, now they are trying to get our people gradually accept joining this Anglo-American political conflict in Middle East under the banner of IMCTC and various defense deals. Phase one of this “Awami Chanakya Policy” to serve her master is sending our soldiers and officers for mine sweeps and IMCTC only. And the approaching phase two of this deceit would be to force our troops to shed the blood of Muslims for this colonial international political conflict. And, for sure, this government will continue to betray the Muslims of Bangladesh by cooperating with the plunderer Al-Saud family at America’s behest since it needs the continued blessing from her master to get its throne secured. Thus, immediately after the farcical national election, the government rushed to get into this defense deal out of its indebtedness towards America for being by its side even after the shameless and colossal vote-rigging.

O Sincere Officers of Bangladesh Army! Millions of your fellow Muslims are paying a huge price in their own land in Yemen as a result of this colonialist struggle. Your brothers in Islam over there have been displaced, killed and starved by the hands of the evil rulers of the family of Saud, and our traitorous government also is forcing you and your troops to be a part of those crimes its master (America) and her agent are committing. O courageous brothers! Is it not high time for you to wake up and uproot the criminal agents of the colonist America that exist in our land only to serve their geopolitical interests? Take heed to the serious call of Hizb ut Tahrir, O Officers! Only you have the “material power” with which you can remove this treacherous regime and transfer authority (give nusrah) to Hizb ut Tahrir to reestablish the Khilafah State (Caliphate) on the method of the Prophethood, and thus, bring back the dignity and honor of the Muslims.

“And stop them, verily they are to be questioned”