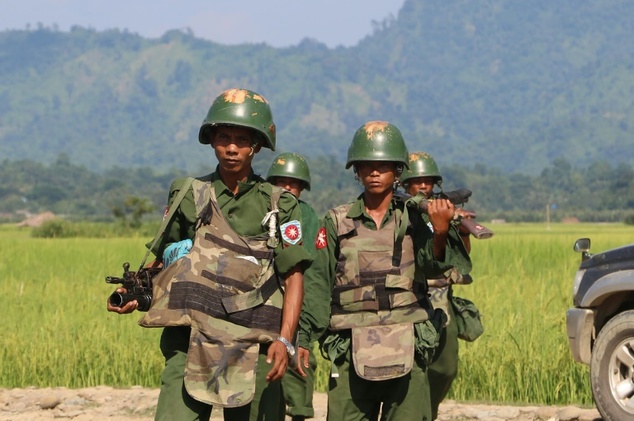 On the 15th November 2016 the UK newspaper The Daily Mail reported that approximately 200 Rohingya Muslims are forced to stay stranded at the boarders of Bangladesh as security forces acting on Sheikh Hasina’s orders refuse entry to the desperate citizens fleeing the Rakhine State “They are mostly women and children who were only seeking a safe place to stay. They have no homes to go back to,” one of the Rohingya leaders told AFP from a refugee camp in Bangladesh’s Teknaf border town. Violence has against Muslims has escalated in the last days with many Muslim murdered, homes burnt and women violated.

The violent oppression of Muslims in Mayanmar is not new to the world and the fact that years have passes with the weak and poor Muslims of Mayanmar being hunted like animals without help is a great shame upon the world leaders. This burden of responsibility lies firstly with the neighbouring states like Bangladesh, who have the means to send armies to rescue those who are being murdered and also provide refuge to the fleeing masses running for their lives. Instead what we find is a political vacuum where leaders like Sheikh Hasina willfully block the path of safety for the victims and instead of providing sympathy and practical aid to the needy, she herself assists the enemy in bringing death and humiliation to the neighboring brothers, sisters and children of our Ummah. The Women of Hizb ut Tahrir are outraged at this kind of cruel leadership, which has no relevance to the Islamic Laws and duty of guardianship that Allah سبحانه وتعالى placed upon those in power as described in numerous Islamic evidences including this hadith of Mohammand ﷺ.

Abdullah ibn Umar reported: The Messenger of Allah, peace and blessings be upon him, said,

A real Islamic leader sincere to Allah سبحانه وتعالى would follow the example of the great Khalif’s before them and upon the first sign of threat against any Muslim internationally, entire armies of people would be dispatched immediately to cure the illness of persecution! As was the case in the time of the first Khilafah when the oppressed Muslim of Mecca entered Medina, they were greeted as brothers and sister with the host families sharing 50% of everything they had –including their own home! Today all of our leaders are not slaves to Allah سبحانه وتعالى and the Prophet ﷺ but worship Capitalist leaders and their economic interest in slaughtering Muslims to maintain their selfish system of material gain. Only the return of the Khilafah as defined by the Prophet ﷺ in Medina will allow oppressed refugees everywhere to have a safe and secure exist from their nightmare of killing and poverty. In the meantime, all Muslim leaders of the world share the crime against the Muslims of Myanmar with their deliberate failure to help them and we must separate ourselves from their failure in speaking out against their wrong doing and work for the return of the Khilafah as commanded by Allah سبحانه وتعالى.

Member of the Central Media Office of Hizb ut tahrir