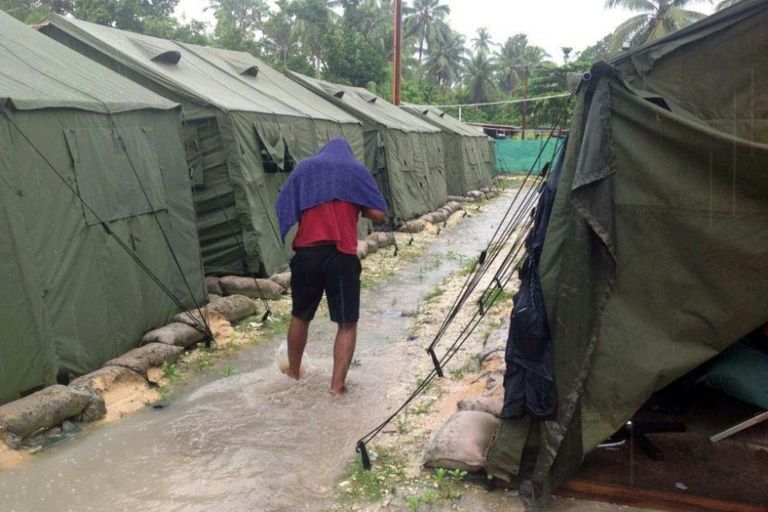 The Australian government is responsible for the deliberate and systematic torture of refugees on Nauru and should be held accountable under international law, according to a major new report informed by unprecedented access to the secretive island.

Amnesty International said it had interviewed 62 refugees and asylum seekers on Nauru, and more than a dozen current or former contract workers who delivered services on behalf of the Australian government, to compile a report it titled: “Island of Despair”.

The treatment of refugees on Nauru is in breach of international law and amounts to torture, according to Amnesty International – but the Prime Minister rejects the claim.

The cache of evidence details allegations of recurrent self-harm and attempted suicide, children being hit by teachers and threatened with machetes by peers, deficient medical care and persecution akin to that which refugees had fled in their homelands.

The offshore processing regime was “explicitly designed to inflict incalculable damage on hundreds of women, men and children” as an act of deterrence, by isolating them “on a remote place from which they cannot leave, with the specific intention that these people should suffer harm”, Amnesty said.

After paying thousands of dollars to flee unsafe and unstable countries like Myanmar, Iraq, Afghanistan, Pakistan, Somalia and Iran, asylum seeking men, women and children have been intercepted on the open seas by the Australian Border Force and involuntarily taken to Nauru Island’s “processing centres” where for years men women and children wait for their asylum seeking applications to be assessed and approved by the Australian government. During this lengthy period, women and children have been locked up in militarised like camps, forced to inhumanely exist in oppressive environments that systematically aims to produce significant mental suffering and despair that according to Amnesty International such treatment amounts to the deliberate and systematic torture of refugees. The Australian government has clearly communicated its intentions behind creating this forty billion dollar ‘Operation Sovereign Borders’ policy and offshore processing centres on both Nauru Island and Manus Island in Papua New Guinea as a tough strategy to prevent future asylum seekers arriving to Australia by boat through the creation of such desperate and inhumane conditions for asylum seekers. Thus, this intentional and harmful objective to so-called “stop the boats” and prevent people smugglers profiting off mainly Muslim refugees from settling in Australia is to create desperate and stressful mental conditions for once patient and tolerant people who are reduced to feeling hopeless and uncertain of their future and consequently depressed to the point of going mad, self-harming, self-immolating and tragically attempting suicide. The disturbing case of 21 year old Hodan Yusuf from Somalia is one sad example who due to such conditions desperately set herself alight causing 70 percent of burns to her body in May, 2016.

However, what distinguishes Australia’s cruel immigration policy is the systematic torture and criminal neglect of asylum seeking children in detention and the unacceptable circumstances on Nauru for refugee children that should have both the Australian Government and the Government of Nauru hang their heads in shame. Documented cases by Amnesty International from whistle blowers who worked as professional teachers or health care professionals within the detention camps have spoken out about these conditions despite the possibility of being jailed for two years due to the secrecy that the Australian government has imposed that aims to prevents any information from Nauru released. Paediatrician Professor David Isaccs worked on Nauru and said to UK’s Channel 4 that the conditions on Nauru, “meets the definition of torture. I argue that it was worse than Guantanamo or Abu Ghraib because in Guantanamo and Abu Ghraib those were happening to adults and not children. They’ve come asking for our help and our response to is punish them”.

Then there is the Nauru Files that was revealed by the Guardian Newspaper on August 2016, revealed the scale of abuse in Australian offshore detention centres towards children. The largest cache of 2,000 leaked documents reveals incident reports totaling 8,000 pages of cases of assaults and child abuse. More than half of these reports totaling 51.3% involve children, although children made up only about 18% of those in detention on Nauru at the time these reports were made. Reports ranging from a guard allegedly grabbing a boy and threatening to kill him once he is living in the community to guards allegedly slapping children in the face. In September 2014, a teacher reported that a young classroom helper had requested a four-minute shower instead of two-minute shower. “Her request has been accepted on condition of sexual favours. It is a male security person. She did not state if this has or hasn’t occurred. The security officer wants to view a boy or girl having a shower.” Reports of sexual assault of children, assault on children and threatened self-harm involving children reveals how extraordinarily desperate these children in Australian detention centres are. Refugee children outside the detention centre have also been exposed to child abuse, sexual assault and educational neglect by the Nauruan authorities.

Governments like Australia that intend on making conditions absolutely intolerable for asylum seeking women and children by locking them up in “processing centres” like that on Nauru Island, reflects the utter inhumane position that secular liberal democracies have towards the refugee crisis. Despite the fact the Australian government’s militant capitalist foreign policies in Muslim countries like Afghanistan, Iraq and Syria have directly caused and exacerbated the refugee crisis, the Australian Government not only refuses to take responsibility for a mere 1500 refugees languishing on both Nauru and Manus Island but systematically tortures them instead. This is also in conjunction with the deliberate smearing campaign of Muslim refugees by politicians who over the last 15 years have whipped up xenophobic attitudes towards refugees within the Australian society due to the association of being Muslim and a refugee alongside the ongoing campaign against so-called violent, radical “Islamic extremism” that produces anti-immigration and anti-Muslim attitudes. Thus fears of Muslim immigration and terrorism have now become synonymous within the society.

The lack of humanity and justice in the 21st century towards Muslim men, women and children asylum seekers and refugees is a far cry from the attitudes and policies that the Islamic Khilafah adopted towards asylum seeking Jews in the 19th century during the Ottoman Khilafah.

History relates that a team was dispatched from the US State Department in 1877 to assess the treatment of Jews in the Ottoman Caliphate. Their findings that Jews were very well treated and not persecuted are described in the news article below published on Wednesday 23rd August 1877 by the New York Times.

“The United States Minister says that justice to the Turk compels him to admit that the Israelites have been better treated by the Ottomans than by many of the Western powers and that the impression prevails that they are better treated in the Empire than the Christians.”

“They are recognized as independent religious community with the privileges of their own ecclesiastical rule, their chief Rabbi, Chacham Bashi, possessing, in consequence of his functions, great influence.”