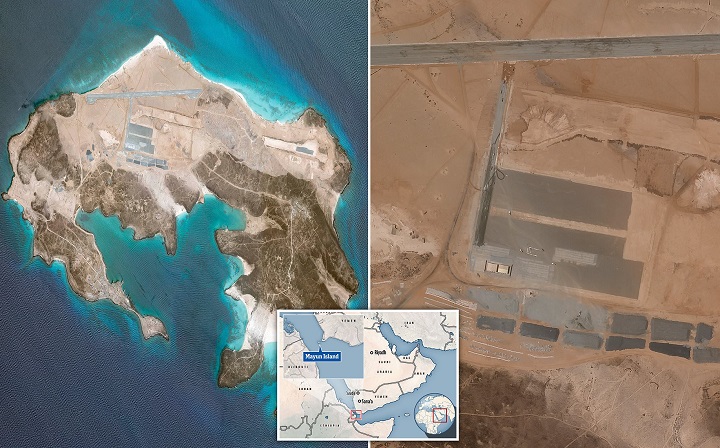 The Associated Press revealed, in a report published on Thursday, 27 May 2021, the construction of an air base on the strategic Mayun Island [aka Perim Island] in Bab al-Mandab, off Yemen. The report attached satellite images that showed the completion of the construction of the secret air base on Mayun Island, with a runway of 1850 m, and the UAE’s transfer, in the past weeks, of modern spy communications equipment and officers specialized in the use of aircraft and intelligence, from its military base on the Eritrean island of Assab.

The UAE has started building the Mayun volcanic base, which covers an area of ​​13 square kilometers and has a population of about 250 people, at the gateway to the Red Sea, since 2017, according to Jane’s Defence Weekly disclosure in February 2017. With the construction of the base approaching the end, the UAE, since April 2020, has made the island a military zone and isolated it from its external surroundings. The Italian Institute for International Political Studies revealed that the UAE has strengthened its control over the islands of Yemen and its coasts to the west and south, pointing to Abu Dhabi’s control of the islands of Socotra and Mayun.

A source close to Abd Rabbo Hadi revealed earlier that the UAE intends to fully acquire the island of Socotra, and now it is the turn of Mayun Island. Abd Rabbo Hadi abstained from the consequences of this, and placed the responsibility on the Southern Transitional Council. By controlling the islands of Socotra and Mayun, the UAE aims to undermine the legitimacy of Abd Rabbo Hadi, and favor the Transitional Council, with which it sides and gives it the right to control the islands in the Arabian and Red Seas.

This disclosure comes from the American Associated Press to expose Britain’s actions to annex Mayun Island to its control on the eastern coast of the Red Sea, after America was unable to control Mayun Island through the Houthis, who fought desperately before the Emirates pushed them back in favor of Britain. In the face of America’s major attack on Yemen – from its south by the Southern Movement and from its north by the Houthis – Britain no longer had anything but to collect the islands from Socotra on the Arabian Sea to Mayun.

Who else will save the people of Iman and wisdom today, protect them, restore their occupied land, and expel the British and American presence but the Khilafah Rashidah (rightly guided Caliphate) on the Method of Prophethood?!

The Messenger of Allah (saw) said: «ثُمَّ تَكُونُ خِلَافَةٌ عَلَى مِنْهَاجِ النُّبُوَّةِ» “Then there will be Khilafah according to the method of Prophethood.” Hizb ut Tahrir, the frontrunner that does not lie to its people is working eagerly to establish the Khilafah Rashidah state on the Method of Prophethood, so O people of Iman and wisdom be its supporters and work with it to achieve Allah’s (swt) promise and the glad tiding of His Prophet (saw).