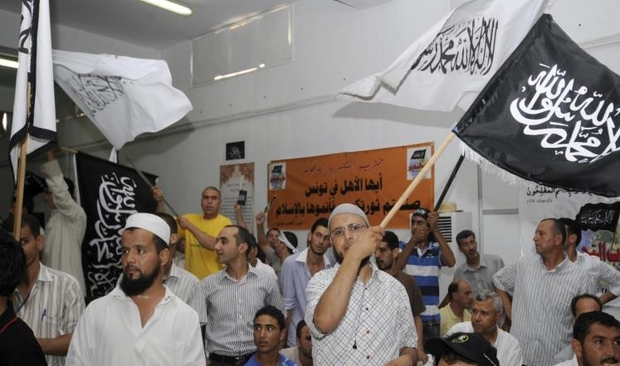 After the arrogant and humiliating interference of foreign ambassadors in the finest details of political life in Tunisia, here is the interim Tunisian President Mohammed Nasser received on Monday, 1st Safar 1441 AH, corresponding to 30th September 2019 CE at Carthage Palace, a delegation of the US House of Representatives and Senate, headed by the Chairman of the Commission on Security and Cooperation in Europe, Congressman Alcee L. Hastings, who voiced his country’s keenness to consolidate their secular Western democratic project to exclude Islam from power, where he said that his delegation’s visit “aims to underline his country’s interest in the success of the democratic transition in Tunisia,” praising “the success of Tunisia’s efforts to combat terrorism and its strategic role as an emerging democracy in ensuring and strengthening stability in the region in general.”

These statements have highlighted that the malicious democratic game is sponsored by the West in our country, according to its interest maliciously and deceptively; to exclude Islam from power, and that its eagerness for the participation of the people of Tunisia in the elections is intended to make Tunisia a model for Muslims in enshrining its system and guarding its civilization, so that the peoples of the region do not move towards a productive radical change on the basis of Islam.

Allah has honored you when you were the first to rebel against the tyrannical regimes, so you ignited a revolution that is still burning in the region, haunting the colonial disbelievers. So, complete your revolution with Islam and support Allah by applying His rightful law and rejecting the democratic system and its elections that consolidate colonialism, Allah bless you and make your foothold firm. And we are your brothers in Hizb ut Tahrir, we urge you to work with us and support us, a support that will bring back the second Khilafah Rashidah (rightly guided Caliphate) on the method of the Prophethood after this forcible rule, which we are caught in its fire, achieving the promise of Allah Almighty:

“Allah has promised those who have believed among you and done righteous deeds that He will surely grant them succession [to authority] upon the earth …” [An-Nur: 55].