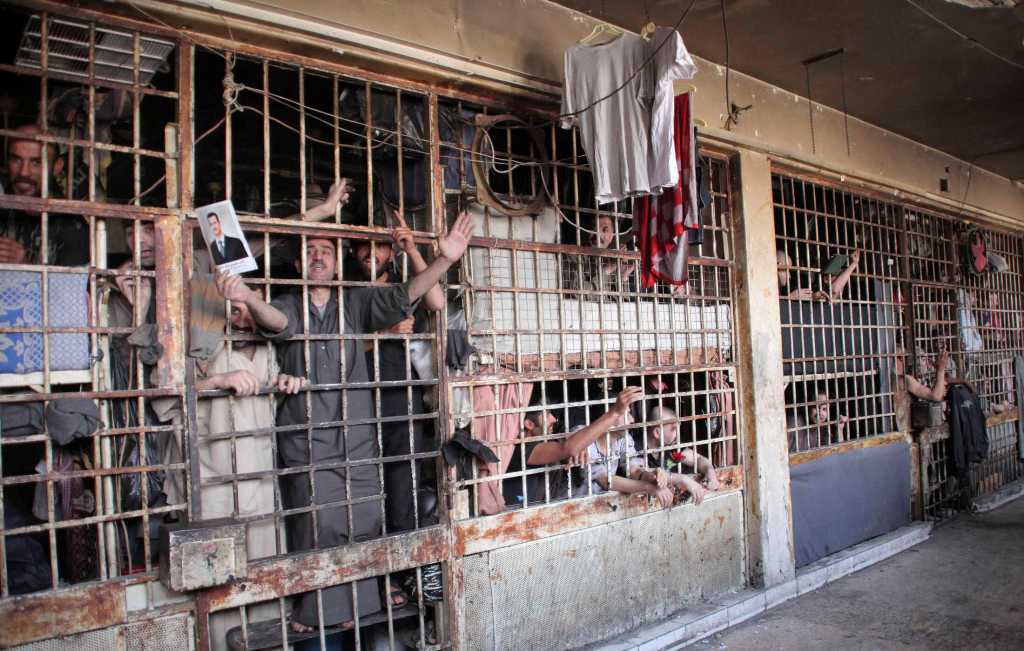 On the 4th January, the Association of Detainees and Missing in Sednaya Prisons (ADMSP), published a report that revealed that the Assad regime had extorted more than $100 million from families of individuals who had been subjected to forced disappearance at the hands of Syrian security forces.

Syrian guards, government officials, judges, lawyers, members of the military, intelligence officers and Shabiha received cuts from the payment made by the families to gain information, visits or the release of their loved ones detained in Assad’s dungeons. The report was based on interviews with more than 500 families of those forcibly disappeared. It suggested that the true amount extorted could be $900 million based upon the numbers arrested and released by the regime since the uprising in 2011. The payments have been “a great source of funding” for the regime’s murderous security apparatus. According to the paper by ADMSP, the Syrian government has turned “forced disappearance and arrests” into an industry for the benefit of the state. Diab Sariya, co-founder and coordinator of the organisation stated: “The data and information provided by the report show that the regime in Syria does not only practice forced disappearance against political opponents, but rather also targets individuals whose families it believes it can collect money from.” According to the Syrian Network for Human Rights (SNHR), 100,000 Syrians have been forcibly disappeared in Syria, 130,000 are still detained or forcibly disappeared (male and female) and around 1.2 million have been arrested or detained at some point since the start of protests in 2011. Forced disappearance of political opponents has long been used as a major and systematic strategy by Assad and his father to control and intimidate society and prevent dissent against their dictatorial rule.

The horrific scale of repression and tyranny suffered by the Muslims of Syria under this murderous regime is never ending. Assad’s notorious industrial-scale detention system is renowned for the most brutal torture and killings of those opposing his rule. Tens of thousands have been tortured and thousands killed while in custody in the notorious Sednaya prison alone which has been described by international rights organisations as a “human slaughterhouse”. Amnesty International previously reported on mass executions conducted between 2011 and 2015 at Sednaya prison, with between 20 to 50 inmates being hanged in the middle of the night as often as twice a week. A 2019 report by SNHR stated that there were over 14,000 documented cases of people who had been tortured to death in the regime’s detention centres since 2011 but the true numbers are thought to be much higher. It also described 72 kinds of torture inflicted on detainees including scalding with boiling hot water, removal of body parts, rape and other forms of sexual abuse, and even allowing junior doctors to practice on prisoners for surgical training. There have even been reports of electric power drills being used on the bodies of detainees. According to the International Conscience Movement, an NGO, more than 13,000 women have also been jailed as political prisoners since the conflict began, with more than 7000 women remaining in detention where they are also subjected to torture, rape and other forms of sexual violence. Many became pregnant as a result of these criminal acts. Hasbunallah wa ni’mal wakeel!

And now we see that this monstrous regime has been profiteering and funding its brutal crimes from all this barbarity. But what is even more sickening is that there is no state in the world today who has the moral conscience and political will to respond to end this incomprehensible scale of human suffering and oppression; no state to uproot this evil regime and stand in the face of its heinous allies; no state to give dignified sanctuary to the terrorized victims of this 10-year war, care for them with compassion and kindness and provide them with all their needs.

O Muslims! When will we realize that there will be no end to this barbarity and slaughter of our Ummah in Syria and across the world, no end to the tears of our dishonoured Muslim sisters, no true sanctuary for the oppressed and no end to these crimes against humanity without the establishment of the System prescribed by Allah (swt) to be the shield, guardian and protector of the Muslims: the Khilafah (Caliphate) based upon the method of the Prophethood. The Messenger ﷺ said: «وَإِنَّمَا الإِمَامُ جُنَّةٌ يُقَاتَلُ مِنْ وَرَائِهِ وَيُتَّقَى بِهِ» “Only the Imam is a shield, behind whom you fight and you protect yourself with.” Imam Nawawi (ra) explained the shield as being a cover for those behind him, since the Imam is the cover which prevents the enemy from harming the Muslims. This is by leading the army, protecting the borders and organizing the Jihad. Under the Khilafah, the Muslims were able to defeat the mighty Byzantine empire and take Syria which was under its rule into the folds of Islamic governance within a few years. Indeed, at the Battle of Yarmouk in 636 CE, fought at the time of the Khilafah of Umar bin Al Khattab (ra), the Muslim army was able to gain a decisive victory over the Byzantine army which hugely outnumbered the Muslim fighters and was better equipped and better trained. This was due to the Nasr of Allah (swt) Who promises His Support to those who fight to serve His Cause. In fact, the Khilafah was able to bring two of the biggest empires at the time to their knees – the Byzantines and Persians – even though the Islamic state was relatively new on the world stage, and its army small compared to these world powers. Indeed, the establishment of this System of Allah (swt) will uproot all these tyrants and oppressors from our lands for good, establish security and honour for our Ummah, and achieve great victories for our Deen biithnillah.

“Verily, Allah will help those who help His Cause. Lo! Allah is Strong, Almighty.” [Al-Hajj: 40]