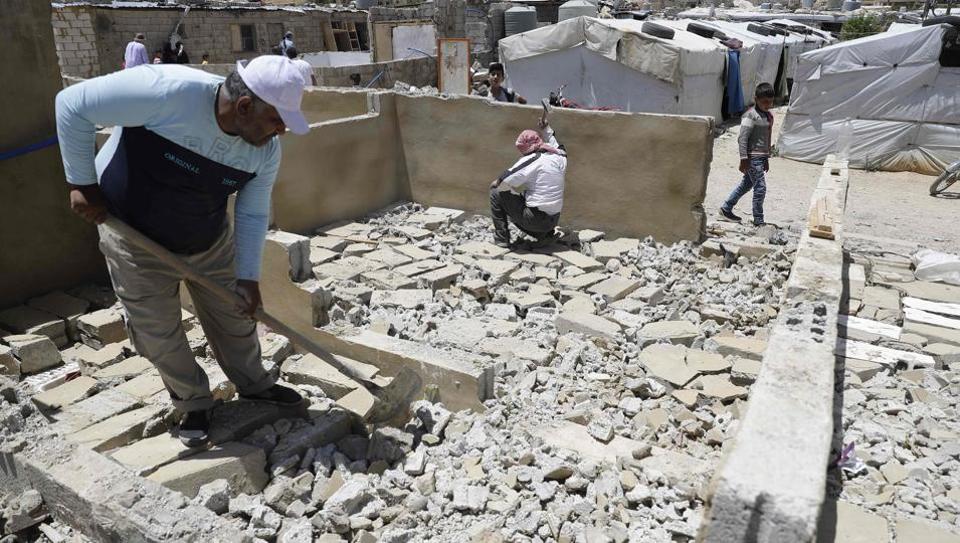 On the 10/5/2019, a resolution was passed by the High Defense Council to destroy the cemented structures in the refugees’ camps, and hand every family a tent made of fabric sheets and slabs of wood, within 24 hours of the destruction of their cemented rooms, which did not happen.

Thousands of refugees live in the open in the Lebanese area of ​​Arsal but this time it is not due to natural disasters from floods and storms, nor by permanent fires due to the loss of safety and protection, but rather due to the lack of humanity in the laws in force in Lebanon on the one hand; and on the other due to the racist speeches and provocation of sectarianism and hatred of resettlement, as if the wall of cement, which protects from the snow and torrential rains in open areas, will prevent the return of those whose homes, land and livelihood have been stolen! As if this undignified wall of cement is a home that one seeks to live in throughout his life!

More than one million refugees are living in the midst of all the various conflicting party political lines in Lebanon, all competing for their personal, partisan and sectarian benefits. More than one million refugees are considered a file from a series of other controversial files on the negotiating table to become a game chip that each party wants to play in order to serve their interests, to improve their conditions in the political solution to be presented and implemented at each ministerial meeting or parliamentary session. More than one million refugees are fluctuating between the speakers who are new to the current situation, according to these politicians to stop security matters from slipping from their grips or halting the division of the country. We hear the moral and human discourse because it is necessary and must be upheld, in opposition to the populist discourse that holds the refugees responsible for the deterioration in the Lebanese economy, the labour market and the deteriorating standard of living. So the displaced and one escaping from the oppression of the tyrant of Ash-Sham became responsible for unemployment and costs the Lebanese treasury heavy losses, and is the cause of environmental pollution and the interruption of permanent electricity, as if Lebanon was in a better situation before!

O people of Lebanon, do not be like the deaf, dumb and blind and turn into one of the many games being played by the corrupt officials in their traditional way of running away from responsibilities throughout the years of their unjust rule. They escape from their responsibilities to avoid them, especially as they are at the core of decision-making and responsibility. They are the ones accounted for the failure; and not the vulnerable, refugees and displaced and those escaping the killing, who face this abhorrent racism, which penetrated the hearts of the sick and spiteful politicians of Lebanon. Allah (swt) says: أَفَلَمْ يَسِيرُوا فِي الْأَرْضِ فَتَكُونَ لَهُمْ قُلُوبٌ يَعْقِلُونَ بِهَا أَوْ آذَانٌ يَسْمَعُونَ بِهَا فَإِنَّهَا لَا تَعْمَى الْأَبْصَارُ وَلَٰكِن تَعْمَى الْقُلُوبُ الَّتِي فِي الصُّدُورِ “So have they not traveled through the earth and have hearts by which to reason and ears by which to hear? For indeed, it is not eyes that are blinded, but blinded are the hearts which are within the breasts.” [Al-Hajj: 46]

O Muslims in Lebanon: Know that the provision is in Allah’s hand alone, and that the economic and living hardship we are experiencing is because of the absence of Allah’s law and the distribution of wealth to a group of corrupt people who are living off the theft of people’s pockets. Know that Allah’s law makes it a duty to stand with our brothers and sisters, the refugees from Syria, they are our brothers and sisters in the Deen. Allah (swt) says: إِنَّ هَذِهِ أُمَّتُكُمْ أُمَّةً وَاحِدَةً وَأَنَا رَبُّكُمْ فَاعْبُدُونِ “Indeed this, your religion, is one religion, and I am your Lord, so worship Me” [Al-Anbiya: 92].

Do not allow them to create these borders that tore the Muslim countries into statelets. Do not give them reason to cause injustice to your brothers from the people of Syria and do not help the oppressors against your brothers. And work with Hizb ut Tahrir to establish the second Khilafah Rashida (Righteous Caliphate) on the method of Prophethood to rule by Allah’s law so that justice is spread and injustice is lifted from the oppressed.