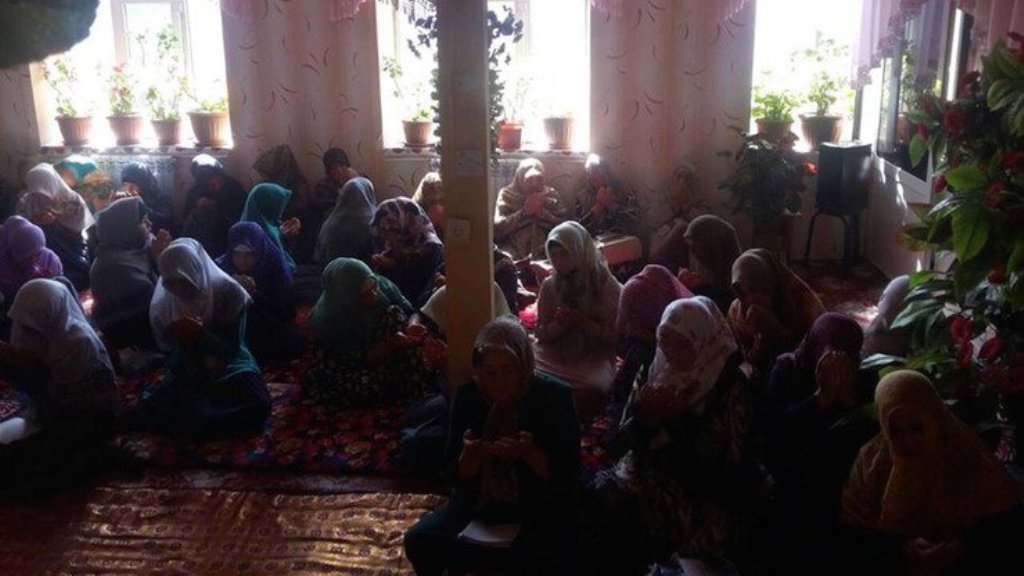 Six women have been arrested by officials of the State National Security Committee in Kyrgyzstan on suspicion of belonging to a banned group. According to the leaked information, the women who were imprisoned in Naryn are suspected of belonging to the banned (extremist) Hizb ut Tahrir organization in Kyrgyzstan. During the search of their homes, (extremist) books and a digital tablet loaded with Hizb ut Tahrir campaign materials were found in their homes. Laptops, SIM cards, and agendas were seized to check all available materials.

The detainees were placed in the temporary 24th detention center in Naryn. They will be tried under the article “Organizing an extremist group” of the Criminal Code of the Kyrgyz Republic, and pre-trial procedures have begun.

It should be noted that the arrest was made jointly by the State National Security Committee and the Naryn Regional Department for Home Affairs. Meanwhile, head of the regional police department, Ulan Aliyev, has not disclosed any information regarding the women in custody. (Radio Azadlik).

On 14 June, 2019, the SCO Board was convened in the Kyrgyz capital, Bishkek, and delegates of its member states met to discuss regional problems, especially economic and security issues. Russian President Vladimir Putin, who attended and directed the summit, stressed the need to combat (terrorism and extremism) in partnership with countries in the region and to fight this battle together.

It should be noted that during the summit, Kyrgyz President Saranbay Janbikav and Russian President Vladimir Putin were whispering behind the door in private.

The organization held the next session in the capital of Tajikistan, Dushanbe. There, too, the same security issues were discussed; the issues of (extremism and counter-terrorism).

The Kyrgyz government has declared war on Islam and Muslims for many years in the name of (fighting terrorism), and it does not hesitate to arrest women.

The whole world knows, especially the Kyrgyz government, that Hizb ut Tahrir is a political party, which carries only political ideas and does not embrace material action. Arresting women on charges of belonging to Hizb ut Tahrir and linking this to terrorism is a major deception. It has not arrested one, or two, but six women at once in Naryn for “extremism and terrorism”, which confirms that the government follows the orders of its masters at the highest level.

When asked about the reason for banning Hizb ut Tahrir in Russia, President of Russian Federation Vladimir Putin replied to the RIA news agency, saying: “The ban imposed on the activities of the Islamic Hizb ut Tahrir organization, which the armed forces of the Russian Federation consider terrorist, is compulsory to execute on the territory of Russia. The ideology this organization has already had serious consequences, for example refusing blood transfusion to children whose lives depend on it!

Yes, disbelief is not ashamed of explaining the empty reason for fighting the truth. Although they know the main objective of Hizb ut Tahrir, they confuse the truth with falsehood.

Hizb ut Tahrir publishes its press releases on its official websites which contains its ideas and program. In addition, it confirms in all its publications and books that it is based on the method of the Messenger of Allah ﷺ and always adheres to it. It is surprising, however, that the puppet rulers of central Asian countries insist on describing the Hizb as an extremist movement, and claim to find weapons while searching the homes of its members!!

The government continues to pursue members of the Hizb and prosecute them with false evidence and with ready-made and fabricated charges after all.

Allah Almighty has told us in His holy Book that the Mushrikeen (polytheists) and the Jews will never be our allies, but rather our enemies. Allah (swt) says: يَا أَيُّهَا الَّذِينَ آمَنُواْ لاَ تَتَّخِذُواْ الْيَهُودَ وَالنَّصَارَى أَوْلِيَاء بَعْضُهُمْ أَوْلِيَاء بَعْضٍ وَمَن يَتَوَلَّهُم مِّنكُمْ فَإِنَّهُ مِنْهُمْ إِنَّ اللّهَ لاَ يَهْدِي الْقَوْمَ الظَّالِمِينَ “O you who have believed, do not take the Jews and the Christians as allies. They are [in fact] allies of one another. And whoever is an ally to them among you – then indeed, he is [one] of them. Indeed, Allah guides not the wrongdoing people.” [Al-Ma’idah: 51]

The Islamic State will be established in the near future, with Allah’s permission, and then these traitors will be handed over to the courts to be held accountable for their crimes. On that day, their masters such as Putin, Lavrov and Trump will not be able to save their lives as they will be busy to save their own lives.