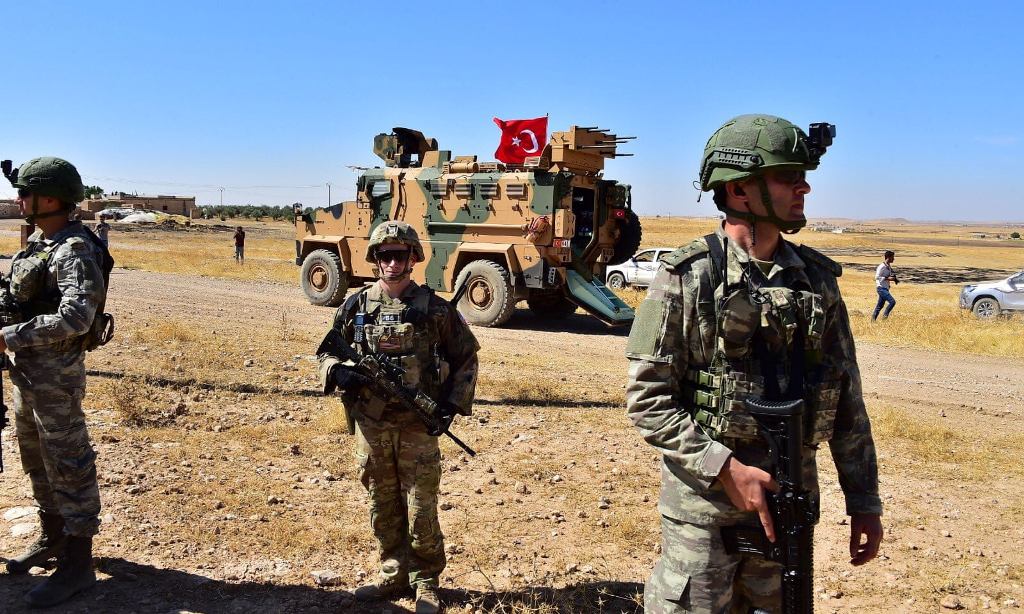 Is it Not Time to Launch them in the Path of Allah (swt) to Liberate Al-Aqsa and Kashmir?

On 11 October 2019, Imran Khan phoned the ruler of Turkey in support of his military operations in Syria, which have unleashed new trials upon its long suffering Muslims, with tens of thousands fleeing their homes, as they gaze upwards in horror at fire and steel raining down from the skies. Thus, Imran Khan supported Erdogan as he rescues the collapsing US agent regime in Syria, using the Kurdish issue as a cover. Just like America’s war in Pakistan’s tribal areas and the war of the Saudi US agent king in Yemen, Erdogan’s war is allegedly against a group, but is actually against the Muslims altogether, who will now have to raise the funerals of their dead loved ones in huge numbers, whilst shaking their fists at the sky in frustrated fury. And this wicked war is even though RasulAllah ﷺ said, «قَتْلُ الْمُؤْمِنِ أَعْظَمُ عِنْدَ اللَّهِ مِنْ زَوَالِ الدُّنْيَا» “Killing a single believer is more grievous before Allah than the extinction of the whole world.” [An-Nasa’i]. Yet, as Trump’s loyal agent, Imran extended support to Erdogan’s new war, as the collapse of the tyrant Bashar will be a strong blow to US plans for the region.

O Muslims of Pakistan! Is it not high time that it is our enemies that flee in terror, as fire and steel is unleashed upon them by our noble and capable armed forces? Enough of rulers that praise open war against Muslims, but declare that war is not even an option when our ravaging enemies fall upon the body of the Islamic Ummah! It is indeed painful that Muslim armed forces are only deployed to extend the rule of treacherous US agents and the reach of destructive US plans, whilst the cries of the Muslims of Occupied Kashmir and Palestine are met with speeches, standing protests and human chains. This is even though Allah (swt) said, وَمَا لَكُمْ لاَ تُقَاتِلُونَ فِى سَبِيلِ ٱللَّهِ وَٱلْمُسْتَضْعَفِينَ مِنَ ٱلرِّجَالِ وَٱلنِّسَآءِ وَٱلْوِلْدَانِ “And what is wrong with you that you fight not in the Cause of Allah, and for those weak, ill-treated and oppressed among men, women, and children.” [Surah An-Nisaa: 4:75.]. So, have we not seen enough of the current rulers to know that our only hope lies in directly calling those who have the capability to change our miserable situation? It is upon us all now to call upon our noble fathers, brothers and sons in the armed forces to breaks the chains that restrain them from the pursuit of victory and martyrdom in Occupied Kashmir and Palestine. Let them now extend their Nussrah for the re-establishment of the Khilafah (Caliphate) on the Method of the Prophethood, so that finally occupied lands shake with the marching of the liberating sons of Salah ud Din (rh). Allah (swt) said, يَا أَيُّهَا الَّذِينَ آمَنُواْ قَاتِلُواْ الَّذِينَ يَلُونَكُم مِّنَ الْكُفَّارِ وَلْيَجِدُوا فِيكُمْ غِلْظَةً وَاعْلَمُواْ أَنَّ اللّهَ مَعَ الْمُتَّقِينَ  “You who have iman! fight those of the kuffar who are near to you and let them find you implacable. Know that Allah is with those who have taqwa.” [Surah at-Tawbah 9:123]