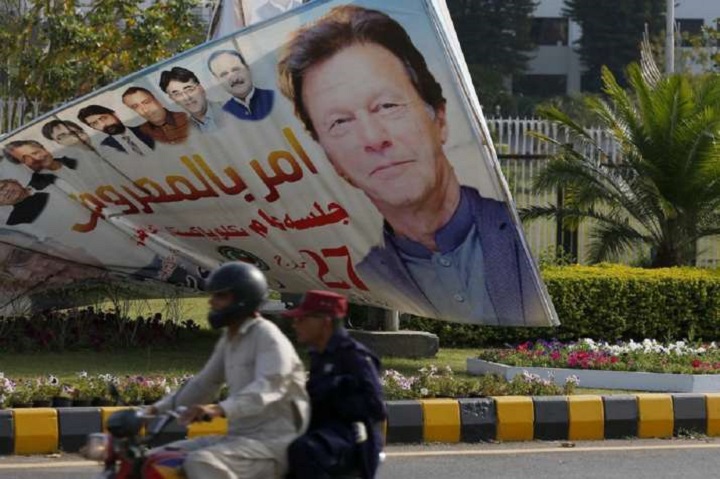 Pakistani opposition legislators have launched a no-confidence motion against Prime Minister Imran Khan in parliament, hoping to remove Khan’s government amid accusations he has mismanaged the nation’s economy. An alliance of opposition legislators, called the Pakistan Democratic Movement, has been trying to woo Khan’s coalition partners away, some of whom seemed ready to desert him. Pakistan’s opposition says it has the required 172 votes in the 342-seat house to remove Khan’s government. Political chaos ensued after the opposition announced it would bring a vote of no-confidence against Khan weeks ago, endangering the government. It marked the toughest challenge of Khan’s political life. (aljazeera.com)

Comment:
Accusations between Imran Khan’s party and opposition parties began to fly when Pakistani Prime Minister Imran Khan claimed on Sunday 27 March, during a show of force to appeal to his supporters, that local politicians are seeking to oust him with foreign support. Khan mentioned in his speech to supporters in the capital, Islamabad that he has received a written threat and has the proof. Meanwhile, tens of thousands of Khan’s party, the Pakistan Tehreek-e-Insaf, marched to Islamabad to affirm their support ahead of the confidence vote expected soon. This completes the episodes of the “civilized” democratic game in which players plot against each other, whilst everyone claims to be sincere to the “national interest.” In fact, they are wrestling over narrow partisan interests and lowly selfishness.

This debate between the ruling party and the opposition in Pakistan is nothing but a debate about something that is of no use to the people. Neither the ruling party nor the opposition has “magic” solutions to the crisis whether they are related economic or ruling or other crises, produced by the current system. Not one of them has an agenda to liberate the country from the dominance of the colonialist kuffar and their cancerous institutions, such as the World Bank, FATF and the IMF and their destructive projects. None of them has an agenda that brings good for the servants of Allah (swt) or the Deen of Islam. Whilst the talk of the incompetence and corruption of the PTI government is correct, it is also true that the government that preceded it was also corrupt and failing. Similarly, any new government that will be formed from these ruling elites that take turn to rule, will also be corrupt and failing. They will never bring any good for the people. Allah (swt) said,

“And Allah sets forth a parable of two men: one of them is dumb, incapable of anything. He is a burden on his master. Wherever he is sent, he brings no good. Can such a person be equal to the one who commands justice and is on the Straight Path?” [TMQ Surah An-Nahl 16:76].

Talking about establishing no-confidence in Imran’s government and initiating early elections to form a new government is for the local public and media consumption only. The ruling elites intend from these dramas to divert the people from the serious talk about real change that will bring the country out of its crises. Real change cannot occur except through the system of Islam in the form of Khilafah Rashidah (rightly guided Caliphate) on the Method of the Prophethood that Hizb ut Tahrir calls the Ummah towards. However, the ruling elites want to prolong the life of the current ruling system by constantly changing its faces alone, taking turns to rule the people. Therefore, Muslims in Pakistan must beware of falling into the traps of this system, those who benefit from it and their tricks. They must not engage in the political rhetoric and debate that does not concern them. Instead, they must engage in the serious work with Hizb ut Tahrir to establish the Khilafah on the Method of Prophethood on the ruins of this rotten ruling system. Allah (swt) said,

“Surely those who believe, do good, and humble themselves before their Lord will be the residents of Paradise. They will be there forever. (23) The example of these two parties is that of the blind and the deaf, compared to the seeing and the hearing. Can the two be equal? Will you not then be mindful?” [TMQ Surah Hud 11: 23-24].