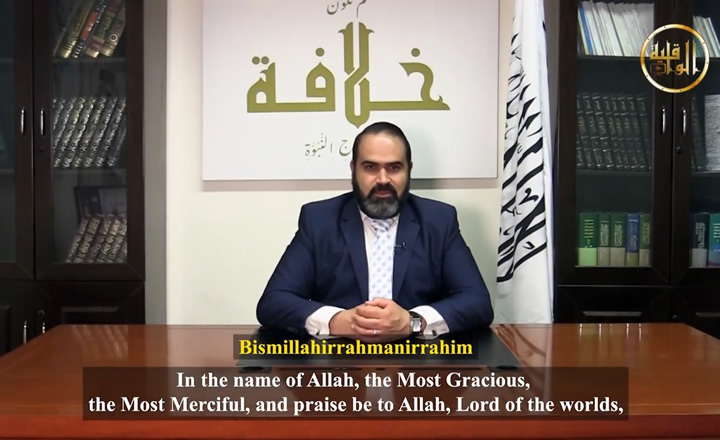 In the name of Allah, the Most Gracious, the Most Merciful, and praise be to Allah, Lord of the worlds, the Creator of humankind and the Sender of the prophets with the messages, the Conqueror of the mighty and the Dominant over the servants, and prayer and peace be upon the master of the creation and the bearer of the message, the one who was sent with the Revelation to establish the Khilafah (Caliphate) system, the one who warned of its destruction and gave glad-tidings of its return, our master Muhammad and upon all his family and companions.

Al-Bukhari reported in his Sahih on the authority of Muhammad bin Ziyad, who said: I heard Abu Hurairah, may Allah be pleased with him, say: The Prophet (saw) said, or he said Abu Al-Qasim (saw) said:

After investigating the new moon of the blessed Ramadan on this night, the eve of Monday, the sighting of the new moon is not confirmed according to the Shariah sighting requirements, therefore tomorrow, Monday, is the completion of the month of Sha’ban, and Tuesday will be the first day of the blessed month of Ramadan for the year 1442 Hijri.

On this occasion, I convey my greetings and congratulations of the Head of the Central Media Office of Hizb ut Tahrir and all those working in it, to the Ameer of Hizb ut Tahrir, the eminent scholar, Ata Bin Khalil Abu Al-Rashtah, asking Allah to support him and to hasten the victory for us and the empowerment by his hands.

Ramadan this year visits us and the world increases in confusion and preoccupation with crises. The failure of the capitalist system has become a perceptible matter among the ruling and opinion-makers’ circles in the capitals in which the capitalist ideology originated. The people of Western countries view with suspicion all of their governments’ behaviour, while the countries occupied by the West – directly or indirectly – are plunging into crises, instability and even chaos. And the people of the Muslim countries in particular are paying double the price for the past hundred years, collectively.

The first price is the continued international humiliation of the Islamic Ummah since the Khilafah was destroyed. The symbolism of this humiliation began when General Gouraud kicked the tomb of Salahuddin, may Allah have mercy on him, and not the last is the scenes is France’s insistence to insult our master Muhammad (saw). Allah (swt) says:

“Hatred has already appeared from their mouths, and what their breasts conceal is greater” [Aal-i-Imran: 118].

As for the second price, it is living a life saturated with crises and tragedies. Under the rule of the capitalist system, most Muslim countries have come under the burden of severe crises. Thus economic, security and social crises has stricken the living standards of hundreds of millions of Muslims. Today, migration and fleeing the country have become the trend for the people of the Islamic Ummah!

The past hundred years have proven that the kaffir colonizing West will not lift this humiliation and misery from the shoulders of the Islamic Ummah as long as it is in control of its fate. Allah (swt) says:

“… if they gain dominance over you, they do not observe concerning you any pact of kinship or covenant of protection?” [At-Tawba: 8].

From the persecution of the Uyghurs and the massacres of the Rohingya, to the destruction of Ash-Sham and the occupation of Al-Aqsa; the starting point of all these crises was the loss of Muslims’ ability to govern their affairs due to the absence of a state that represents these interests.

But the hundred-year’s throes, with the presence of the Dawah carriers, made the Ummah realize, rationally and tangibly, that it lost its pride when it lost its Khilafah, and this realization made the Khilafah a public opinion among Muslims, looking and yearning for its return.

Also, the result of the throes, is that the Ummah became aware of its rulers’ subordination and their betrayal to it. Their concern is to serve the interests of the kaffir colonial West, and they helped it to plunder the Ummah’s wealth, destroy its lands and kill its sons. This made the Ummah realize that its power was usurped and needed to be liberated. Today, its people have become angry and explosive, ready to offer their blood in order to regain their authority.

As for the sovereignty of the Shariah, the Ummah is still undecided towards this obligation. We see it in many situations and events hesitating to make the sovereignty exclusive to the Shariah, so it introduces other laws with the Islamic Shariah in the matter of governance. The reason for this is lack of confidence in the ability of the Shariah to govern life, in addition to feeling inferior towards the power of the kaffir colonial West.

Here comes the role of those Muslims who assumed the pulpits, councils, groups, platforms and media, and those Muslims whom Allah (swt) enabled them to be in positions of power and protection in the Islamic Ummah.

You have accepted the responsibility to formulate public opinion, and Allah will ask them about what He entrusted them with thus making the Ummah steadfast in its confidence in the Islamic law and its ability to manage life affairs is your duty, as also educating it on the prohibition of mixing other laws with the law of Allah is your responsibility. Allah (swt) says:

O People of Power and Protection … O Servants of Allah:

We urge you, during this noble month, to fulfil your responsibility assigned to you by Allah (swt) of power and protection, and put it into practice in order to establish the law of Allah. By giving support to Hizb ut Tahrir, the frontrunner that does not lie to its people, the West’s domination will be lifted from the Muslim countries, and the Ummah’s authority will be restored. Allah (swt) says:

The eve of Monday is the completion of the month of Sha`ban for the year 1442 AH.