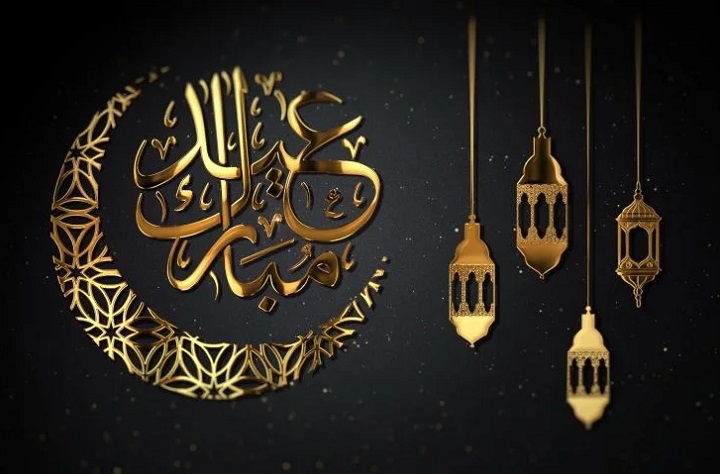 Bismillahi Ar-Rahman Ar-Raheem. Praise be to Allah, Lord of the Worlds, the Lord of the sun and the moon, the Lord of the new moons and measurements of time, the Lord of The Great Throne. Peace and blessings be upon the one who established the state, and brought up the Ummah, our master Muhammed, peace be upon him and upon his family and companions…

Bukhari extracted in his Sahih on the authority of Muhammad Bin Ziyad that he said, I heard Abu Hurairah (ra) say: that the Prophet (saw) said, or he said: Abu Al-Qasim (saw) said: «صوموا لِرُؤيتِهِ وأَفْطِرُوا لرؤيتِهِ فإنْ غُـبِّيَ عليكم فَعُدُّوا ثَلَاثِينَ» “Observe fast on sighting it (the new moon) and break it on sighting it. But if (due to clouds) the actual position of the moon is concealed from you, you should then complete thirty days.”

In this blessed occasion of Eid ul Fitr, Hizb ut Tahrir extends its sincerest congratulations to the Muslim Ummah, asking Allah to return it next year and its state is already established, and Allah has empowered its religion, and spread its banner. I also extend special congratulations on my behalf and on the behalf of the Head of the Central Media Office of Hizb ut Tahrir and all the brothers and sisters working in its departments and units to the Ameer of Hizb ut Tahrir, the eminent scholar Sheikh Ata Khalil Abu Al-Rashtah, asking Allah Almighty to grant him attainment in leading this Dawah to achieve the glad-tiding of the Messenger of Allah (saw) by establishing the second Khilafah Rashidah (rightly guided Caliphate) on the method of Prophethood.

Ramadan this year was not without the afflictions that still plague the Islamic Ummah, either through direct aggression, as happened in the blessed Al-Aqsa Mosque, Yemen, Syria, Bangladesh, Pakistan, Afghanistan, Sudan, Niger, Kyrgyzstan, Russia, Somalia, and others … or due to the negligence and corruption of the rulers, as happened in Iraq, Egypt, India and others. … And in the month of goodness, nearly 200 million people suffer from malnutrition in Muslim countries, and half of the population of Yemen and Syria suffer from hunger, and sights of poverty are manifest in the rest of Muslim countries. Even prayer was not spared from the corruption and ignorance of the rulers. By mishandling the novel pandemic, they deprived Muslims of mosques and distorted the image of congregational prayer.

O Muslims: O the Best Nation brought out to People:

As for the answer, it is: “When the Ummah removed the cloak of the Caliphate from itself, Allah wrapped it with the cloak of humiliation and dishonor.” Caliph Omar ibn Al-Khattab (ra) said: “Verily, Allah honored us with Islam. If we seek honor from anything besides that with which Allah has honored us, then Allah will disgrace us”. The prestige of Islam and Muslims will not return to the world without the return of the prestige of the Khilafah between peoples and nations.

O Muslims … O the Owners of Opinion and Media Platforms:

The public opinion among the Ummah is for the Khilafah, but it needs someone to explain to it the details of this project, and the West is aware of this matter, so it seeks to infiltrate through you details that are not from Islam in order to confuse them with the Khilafah, so that the sovereignty is not exclusive to the Shariah of Allah, so that the Ummah does not rise up. It is time for you as thinkers to rid the doubts that Shariah is not sufficient for this time, for this view is one of the doors of disbelief, Allah forbid. The Shariah has come to all people now, and to those who will be created from now until the Hour comes. As for how that would be, Hizb ut Tahrir has collected from the Qur’an, the Sunnah, the consensus of the Companions, and the proven Islamic heritage, what enables you to realize the ability of Islam to take power and lead the modern world. It is detailed in its chapters from governance to economics, social, culture, judiciary, thought, politics and other chapters on what the Ummah needs to build its state. It is a culture in which the supremacy of Shariah is achieved because it is only from Islam, and none of the ideas or laws of the Kuffar mix with it.

O Muslims … O the People of Power and Protection:

Is not blood boiling in your veins while you see the shameless rulers walk like ostriches with their masters in Western conferences, and walk like pharaohs on the backs of peoples in Islamic countries?! Did not the heresy of France against your Prophet and America’s insolence about your religion provoke you, so that the valor of Abu Bakr Al-Siddiq stir you?! Did your hearts not ache from the testimonies of rape victims from the free women of Ash-Sham to rise like al-Mu’tasim?! Beware, beware of the plan of Allah, because Allah has tested you by Wahan (love of Dunia), so hasten to step away by supporting the project of Hizb ut Tahrir to restore the Khilafah Rashidah before age overtakes you, then Allah replaces you with those who are better than you. The Almighty says: ﴿وَإِن تَتَوَلَّوْا يَسْتَبْدِلْ قَوْماً غَيْرَكُمْ ثُمَّ لا يَكُونُوا أَمْثَالَكُمْ﴾ “And if you turn away, He will replace you with another people; then they will not be the likes of you” [Muhammad: 38].

The eve of Wednesday is the completion of the blessed month of Ramadan for the Hijri year 1442 corresponding to May 12, 2021 CE.