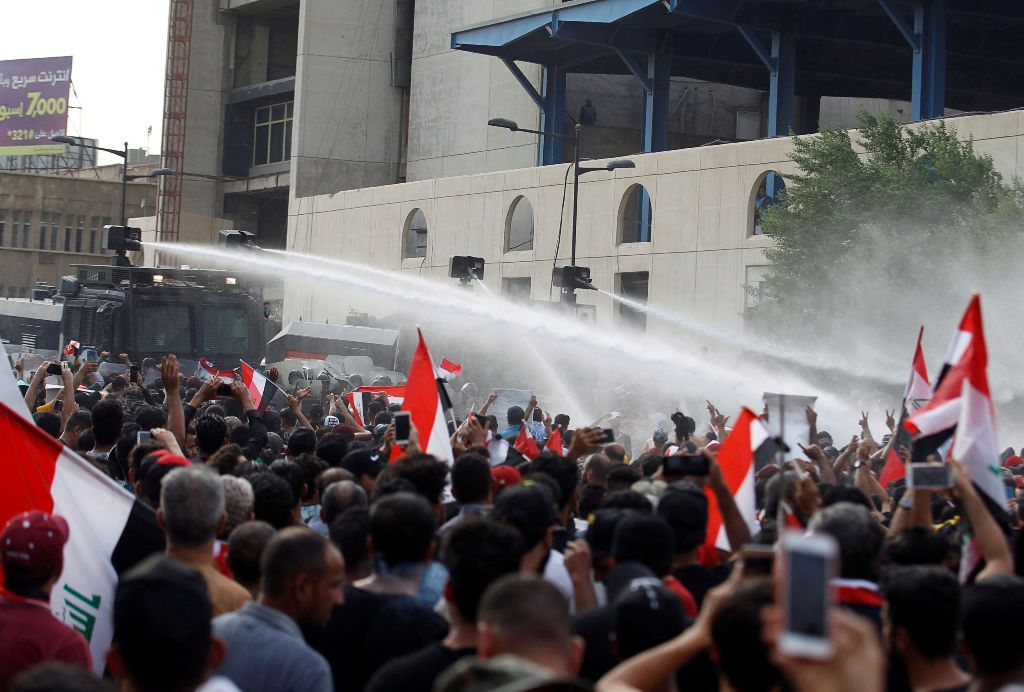 On Tuesday 1/10/2019 and the days that followed, major demonstrations were held by activists and the unemployed in the cities of central and southern Iraq, calling for better services, job opportunities, accountability for the corrupt, and finally the overthrow of the government.

The security forces confronted the demonstrations harshly by using water, tear gas and then firing of live bullets, which led to the death of a number of demonstrators in Baghdad, Hilla, Najaf, Basra, Diwaniyah, Nasiriyah and other cities where the number of deaths and injured have reached more than six thousand, according to the Interior Ministry statement, and hundreds others were arrested. Although the government cut the Internet service, demonstrations continued strongly, and gunmen stormed the offices of a number of satellite channels and closed them after attacking its employees by beating them and smashing office equipment.

In the middle of Friday night, Prime Minister Adel Abdul Mahdi gave a televised speech in which he talked about the situation of the country, his speech was a disappointment to the people, as he did not present any plan to fight corruption or eliminate unemployment or provide services, which are the main demands of the demonstrators. He, in fact, spoke in constructional sentences like: “One year of ruling is not enough to solve the problems of the country.” We do not know whom the Prime Minister is lying to in his words. If Adel Abdul Mahdi has been one of the pillars of the regime since 2003 until now, and had previously been Vice President for four years, then was he really a vice president or was he asleep then woke up after his term ended, his salary and astronomical allocations stopped?!

The US, which occupied Iraq, brought a corrupt group to run the country whose only concern was the looting of its goods and the destruction of its facilities, destroying Iraq’s oil resources, which exceeded $1 trillion from 2003 to 2019, as well as shutting down factories and destroying agricultural lands, many of which were seized by armed gangs after the expulsion of their owners. Iraq districts have become dominated by armed militias, and state posts were distributed among the government’s parties. Many cities were destroyed after being handed over to IS, while millions migrated out of Iraq in search of safety and a living, and corruption spread in all its forms as well as vice and casinos, trading of drugs has almost become publicly consumed by young people… all under the protection of the mafia power (parties and militias).

Demonstrations are not new on the area, ten years ago; protests began in the cities of Ramadi, Mosul and Hawija and were suppressed by armed force and then these cities were handed over to IS for destruction.

More than two years ago, Baghdad witnessed major demonstrations that the Sadrist movement contained and ended.

The problems of Iraq, Egypt, Tunisia, Algeria, Syria and other Muslim countries are a natural consequence of the hegemony of a group of criminals who execute their masters’ projects and wreak havoc in the country. This corruption is a natural secretion to the application of the capitalist system in its most horrific form to a nation that was the best nation brought forth to humankind; Allah (swt) honored it with Islam that ruled it for 1300 years, in which it did not witness unemployment, recession or economic collapse.

The demands of the demonstrators should be radical solutions, not patchwork to the rotten capitalist system, and not by changing people who try a new corrupt recipe every day to increase the wounds of the Ummah. The radical solution will only be the implementation of Allah’s laws which saves not only Muslims, but all of humankind.

Allah the Almighty says the truth:

“This is My Path and it is straight, so follow it. Do not follow other ways or you will become cut off from His Way. That is what He instructs you to do, so that hopefully you will have taqwa.”