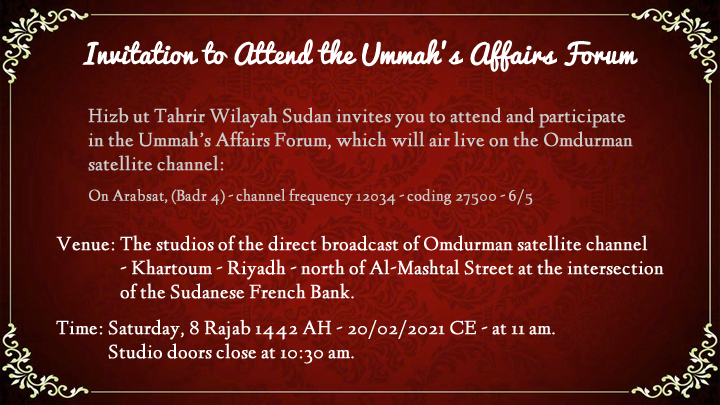 To the Brothers, the pioneers of the Ummah Affairs Forum, including politicians, media professionals, opinion-makers and thinkers.

An Invitation to Attend the Ummah’s Affairs Forum

In commemoration of the 100th anniversary of the demolition of the Khilafah (Caliphate) on 28th Rajab 1342 AH, and a reminder to the Ummah of what befell it of the rupture, fragmentation, loss and the control of the enemies over the reins of its affairs…and to revive the people’s endeavour to work in order to bring it back as rightly-guided upon the method of the Prophethood, with which we make a real change, restore our lost glory, recover our lost dignity, and please our Lord…

Hizb ut Tahrir / Wilayah Sudan invites you to attend and participate in the Ummah’s Affairs Forum, which will air live on the Omdurman satellite channel:

The forum is entitled:

Speaking on the forum:

Venue: the studios of the direct broadcast of Omdurman satellite channel – Khartoum – Riyadh – north of Al-Mashtal Street at the intersection of the Sudanese French Bank.