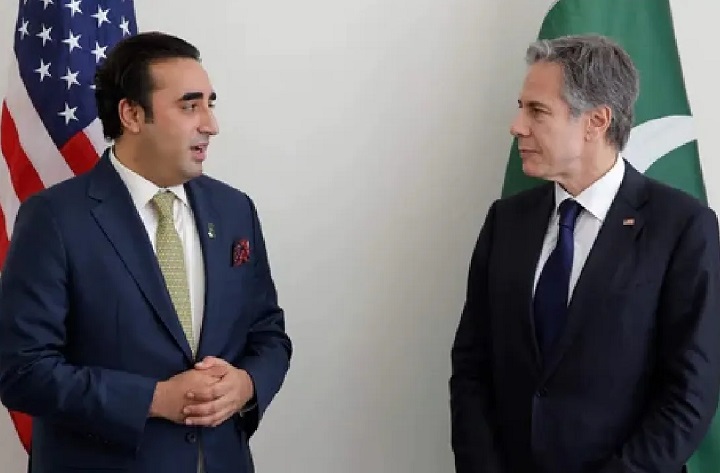 On 18 May 2022, the US State Department released the following statement regarding the meeting between the US Secretary of State, Antony J. Blinken, and Pakistan’s Foreign Minister, Bilawal Bhutto-Zardari, “They underscored the importance of U.S.-Pakistan cooperation on regional peace, counterterrorism, Afghan stability, support for Ukraine, and democratic principles.”

Comment:
So what are the new marching orders for Pakistan, that America conveyed through its new messenger, Bilawal Bhutto-Zardari? ‘US-Pakistan cooperation’ means the complete submission of Pakistan to Biden’s regional and global vision. ‘Regional peace’ means Pakistan abandoning Occupied Kashmir, whilst proceeding with normalization with India. Here, Biden’s vision is for Pakistan to make way for Modi to become Biden’s regional policeman, countering the region’s Muslims and China, on his behalf. ‘Counterterrorism’ means the crusade against the Islamic movements, whether military, such as the Kashmiri mujahideen, or political, such as Hizb ut Tahrir. ‘Afghan stability’ means the binding of the Taliban to the political and economic order that the colonialist West created, in order to enslave and impoverish the Muslim World. ‘Support for Ukraine’ means the Biden plan to provoke Putin into a protracted war, which will burn Europe and Russia in the fires of chaos, whilst reducing options for China to escape Biden’s traps for it. ‘Democratic principles’ means the ruling by other than all that Allah (swt) has revealed, in order to keep the doors open for legislation that violates Shariah rulings, as well as the security and economy of Pakistan.

As is customary before sending back its messenger, the US media was made open for Bilawal, as confirmation that he has digested the message that he must convey. Not only did Bilawal express the vision of his master accurately, he also understood that Islam is the only obstacle to executing the orders of his master. In his interview with CNN of 18 May 2022, Bilawal stated that he will focus on “spreading the peaceful, progressive message of Islam,” whilst committing to oppose ‘terrorism’ and ‘extremism.’

As further confirmation that Bilawal has understood his orders, on 20 May 2022, the official Twitter account of the Secretariat of Chairman Pakistan People’s Party, @MediaCellPPP, issued a series of tweets. The tweets included, “We are not only fighting with a militant component but also fighting with an ideological and narrative component,” “Pakistan is in favor of peace… ultimately dialogue and diplomacy is the solution,” “We convey to the new regime in Afghanistan that they live up to their international commitments” and “Pakistan is not insecure about its relationship with the US and we believe the world is big enough for both Pakistan and India to exist.”

Like his maternal grandfather, Zulfiqar Ali Bhutto, first as foreign minister and then as prime minister, Bilawal Bhutto-Zardari heard the US and obeyed. Accordingly, Bilawal is now a suitable candidate to determine the security of Pakistan and the direction of its armed forces, for years to come. Under Biden’s vision, Bilawal hopes to oversee the suppression of Islamic sentiments within Pakistan, as well as within its armed forces. Bilawal hopes to oversee the reduction of the capabilities of Pakistan’s armed forces, so that they are not an obstacle to the Indian Army, in its expanded regional role.

“And our duty is only to deliver the message clearly.” [TMQ Surah Yasin 36:37]