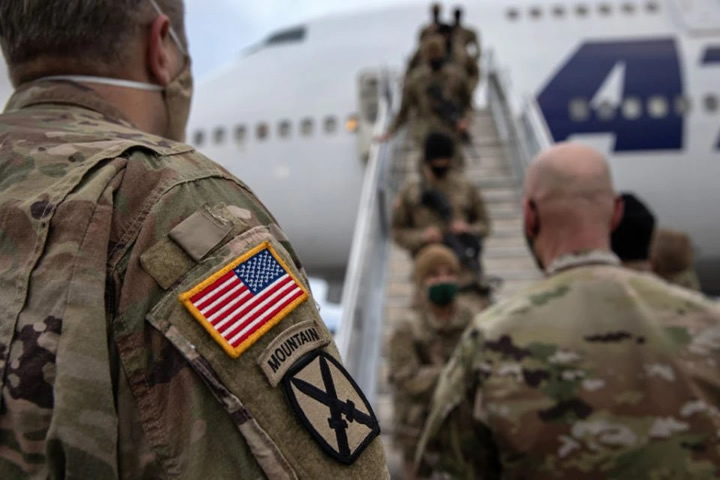 The global media is full of reports of the departure of US forces from Afghanistan. What is now America’s longest war having cost to the US taxpayer in excess of $2 trillion, the lives of 2,488 soldiers, whilst a further 20,722 have returned to the US wounded forever. In a speech at the White House on Wednesday 15th April, US President Joe Biden declared its “time to end America’s longest war, I am now the fourth American president to preside over an American troop presence in Afghanistan, Two Republicans. Two Democrats. I will not pass this responsibility to a fifth.” But whilst the US talks about its army leaving Afghanistan, the USA is not abandoning its strategic interests.

The US played an active role in Afghanistan during the Soviet invasion from 1979 to 1989. But when with the collapse of the Soviet Union in 1991 and the emergence of 5 new republics in Central Asia, Dick Cheney, then chief executive of a major oil services company, remarked: “I cannot think of a time when we have had a region emerge as suddenly to become as strategically significant as the Caspian.” US energy companies saw Central Asian energy as the new Middle East. As Moscow only developed the energy fields in Russia proper, this led to energy in the Caspian and Central Asia to remain underdeveloped and transporting energy from Central Asia to western markets came to dominate US policy making.

With the Caspian and Central Asia being landlocked and lacking access to international waters transporting the region’s energy required new pipelines. Linking South Asia with Central Asia through new pipelines was seen a strategic imperative. Such pipelines would need to run through Iran or Afghanistan, and this is where Afghanistan became important. The US oil company UNOCAL began negotiating in 1995 to build oil and gas pipelines from Turkmenistan, through Afghanistan and into Pakistani ports on the Arabian Sea. Eventually this pipeline did not materialize as UNOCAL was unsure of the economic viability. But US policy makers replaced UNOCAL’s project with the TAPI (Turkmenistan, Afghanistan, Pakistan, India) gas pipeline linking the Caspian and Central Asia through Turkmenistan via Afghanistan and onto Pakistan and India. The US aggressively pushed for this pipeline as it would act as the conduit to control the hydrocarbon resources of the Caspian Sea as well their security and transit.

But the Taliban dragged their feet and the US lost patience with them and saw regime change as the best way to deal with the Taliban and secure its strategic goals over the emerging Central Asia. The invasion of Afghanistan took place as US officials, policy makers and its energy companies came to see Kabul as the route to Central Asia. Regime change in Afghanistan through a military invasion and occupation was the means to achieve US foreign policy goals in Eurasia.

When the US and its coalition partners invaded Afghanistan back in 2001, it was able to drive the Taliban out of Kabul. The US then proceeded to establish a government with a number of corrupt warlords that were bound together due to their hatred for the Taliban. The Kabul central government muddled through the years of the Hamid Karzai presidency but it had no capability beyond its government offices to shape the country. The security forces the US invested in and trained, still today, after 20 years are unable to provide security to the country. The US fell victim to the same reality both the Soviet Union and Britain befell previously and that is an invading force, in the long run will ruin itself in attempting to conquer Afghanistan. The US began to focus on Iraq from 2005 but in both countries the US invaded it became clear that it can destroy regimes but its nation building capabilities are usually a failure.

The US from 2010 saw the military option was a failure and turned to diplomacy to achieve its strategic goals of using Afghanistan to gain Central Asia. For this it used all the surrounding nations to stabilise Afghanistan. Pakistan, Iran, Russia, India and China all played key roles in propping up the US created government in Kabul and brining the Taliban to the negotiating table. Today the Taliban have not just come to the negotiating table but in 2020 signed a peace deal with the US. The US political strategy to co-opt the Taliban includes giving them power in a power sharing agreement with the government in Kabul. This will see the Taliban members receive portfolios in the regime and thus stabilise Afghanistan.

After a war that has lasted longer than both WW1 and WW2 the US was never looking to maintain permanent physical presence in Afghanistan. The US wants to maintain Afghanistan through minimal cost and its military presence has lasted much longer than they envisaged. The US being a global superpower has numerous global issues to be dealing with and Afghanistan is merely just one of many issues. America’s military invasion was a means to an end, it was for gaining the coveted energy sources, transit and pipelines of Central Asia. The US has now used diplomacy where its military strategy failed to achieve its strategic goals for Central Asia. Whilst the US military is leaving Afghanistan, the US is not abandoning the country or its strategic interests.