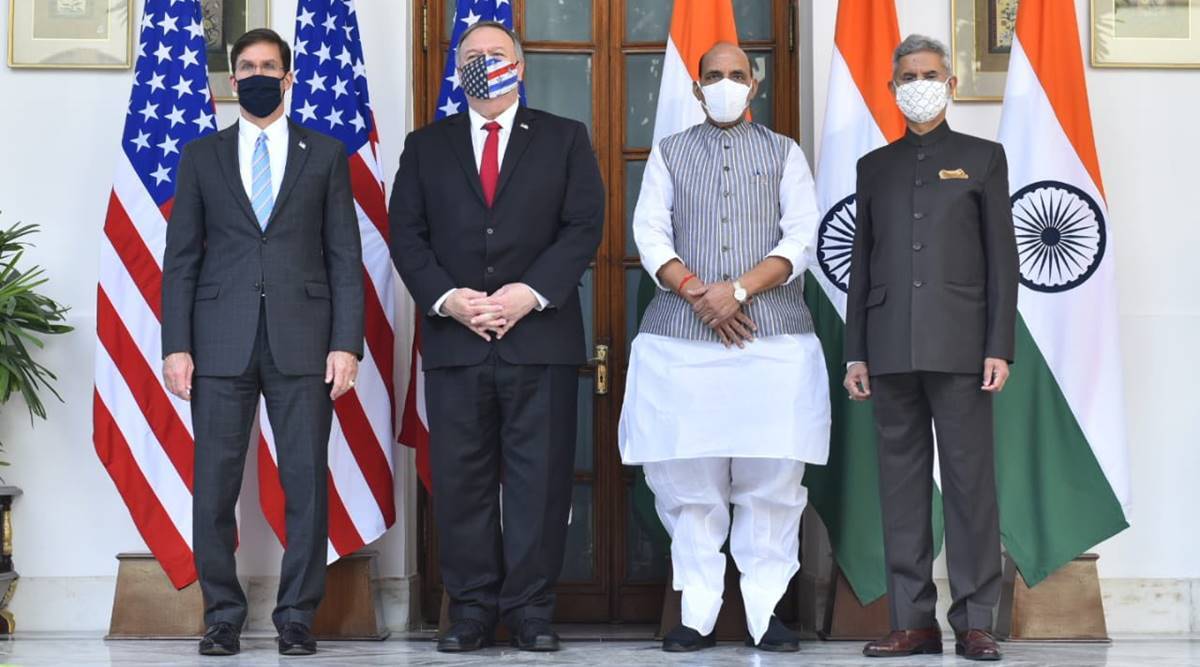 Last month, India and America signed the Basic Exchange and Cooperation Agreement (BECA) on geospatial cooperation. The agreement allows for America to share datasets on topographical, nautical and aeronautical matters considered vital for targeting of missiles and armed drones. Additionally, the agreement enables the US to supply advanced navigational equipment and avionics only to US-supplied aircraft to India. [1]

BECA comes hot on the heels of a bitter standoff between Indian and Chinese troops across the Line of Access Control (LAC) in Ladakh, which has left at least twenty Indian soldiers dead. It is also the cause of major embarrassment to Modi’s government for failing to anticipate Chinese belligerence across the LAC, especially as the People’s Liberation Army (PLA) routinely violates the LAC. Speculation is rife that the BECA is primarily intended to stymie public opinion at home and also provide India with much needed real time data on Chinese troop movements. Moreover, it remains debatable, whether this gives India any strategic advantage over China’s military prowess.

The BECA is the last of the four foundational military agreements signed between New Delhi and Washington. In 2002, the General Security of Military Information Agreement (GSOMIA) was concluded between the two countries. This cemented the path for sharing classified military technology and information between the US government and American companies, with the Indian Defense Public Sector Undertakings (DPSU) but not with the Indian private sector. [2] In 2016, the Logistics Exchange Memorandum of Agreement (LEMOA) was agreed and this permits logistics support during port calls, joint exercises, training and Humanitarian Assistance and Disaster Relief. The biggest benefactor is the Indian Navy as it relies heavily on US logistical support to carry out the above operations. [2, 3].

The Communications Compatibility and Security Agreement (COMCASA) signed in 2018 allows Indian Armed Forces to receive and send secure encrypted communication through dedicated apparatus and access to Anti-Spoofing Module GPS system. These facilities are available for US origin military platforms; however, non-US platforms like Indian warships can also benefit through onboard installation of specialist equipment. [4]. Together the four defense pacts with the US empower India to obtain secure information about latest troop movements on Chinese forces and pin-point PLA targets with a great degree of accuracy. The agreements also allow for Indian armed forces to replenish supplies such as fueling aircraft during operational missions. [5]. These four agreements are in addition to the nuclear accords reached by New Delhi and Washington in 2008.

Despite the apparent benefits of such agreements, there are a few drawbacks for both India and America to consider. First, the use of American hardware to execute these defense pacts could easily expose India’s military hardware to US cyberattacks, which could prove fatal during war. Second, America could easily steal sensitive Indian military data sets, which could put Indian armed forces at an unfair disadvantage or even in vulnerable situations. The same American made hardware could also undermine the efficacy of India’s shoot to kill cycle—from sensor detection, missile launch to hitting enemy targets. As for American policy makers, India’s procurement of Russia’s S-400 air defense system is a major obstacle towards further military integration, and raises the question to what degree can the US rely on India as a major defense partner.

Nevertheless, it is quite clear that both sides have opted for realism to counter China’s ascendency. America has calculated that by signing these pacts, India is on route to bolster its military capabilities to deter Chinese attacks. India shares the same calculus, but thinks it has adroitly maneuvered to retain its military independence. However, by relying on American and Russian hardware it remains questionable to what degree India can exercise sovereignty over its military engagements. China may publicly lament at the defense pacts, but is probably safe in the knowledge that unlike India it is not dependent on American military equipment and know how to defend its borders. As for Pakistan, its military leadership should be worried because the agreements enable India to better plan, execute and carry out reconnaissance post attacks—a feature sorely missing from India’s 2019 Balakot airstrikes. Furthermore, America’s closeness to India means that Pakistan’s top brass has to quickly choose between America and China to not only overcome its security vulnerabilities with its arch enemy India, but also find a long-term trustworthy partner for military equipment.

Ostensibly, from the strategic dimension, America is the clear winner.  Washington has succeeded in laying the basis for the deployment of American personnel and equipment to strengthen India’s capacity to counter Chinese aggression, as well as to preserve a degree of control over India’s future military engagements. Additionally, the agreement permits the US to keep an eye on Beijing’s Belt Road Initiative (BRI) and to actively dissuade Chinese military expansionism westwards. Last of all, the pacts confirm that America wants to make India its principle agent in the subcontinent at Pakistan’s expense. By sacrificing Pakistan, the US is keen to placate detractors in India about the longevity of India-US relations. Expect to see further strengthening of strategic ties under the Biden-Harris leadership.

[2] The Huffington Post, (2020). “What Is BECA And How Will It Help India Monitor Its Borders? Expert Explains” [online] The Huffington Post. Available at https://www.huffingtonpost.in/entry/beca-india-united-states-expert-vikram-mahajan_in_5f9ba594c5b61b5109e6109e [Accessed 08 Nov. 2020].