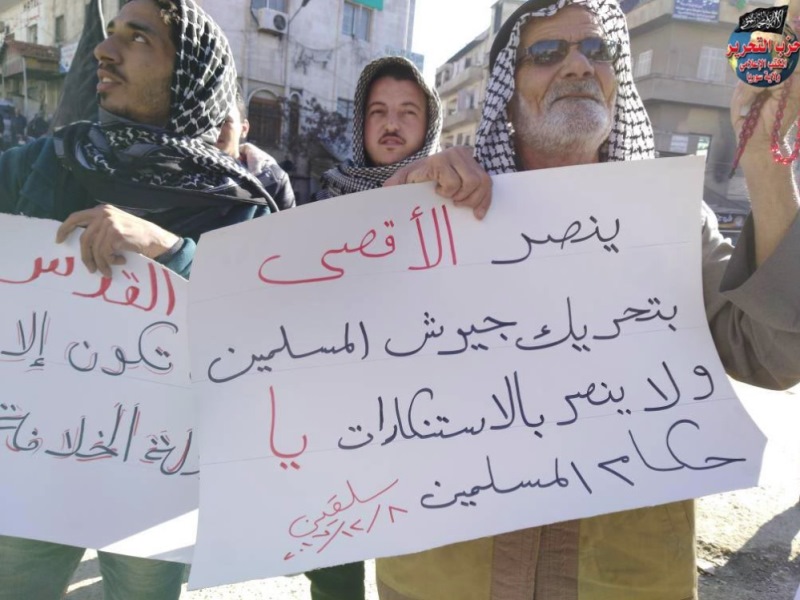 The fact that America, the enemy of Islam and Muslims, and the head of Kufr and tyranny in the world, officially recognized the usurped city of Jerusalem as the capital of the Jewish entity, is not surprising. For it is the one that has taken upon itself the responsibility of the protection and care for the Jewish entity and provided it with the means of its survival and sustenance. And it is the one that declared its crusade war against the Muslim countries and destroyed and occupied Iraq and Afghanistan, killed and displaced millions of Muslims, and is still waging war on Islam and Muslims under the name of war on terrorism, and it is the one that sheds the blood of Muslims in Syria.

If America had found among the rulers of the Muslims one man with chivalry, decency and warmness of the believers it would not have dared to protect and care for the Jewish entity, and it would not have gone to extremes to recognize the city of Jerusalem as its capital. However, it found the rulers of cowardice, agency, treachery and betrayal, who hold badges of shame and disgrace on their chests. It found dedicated rulers in its service to the extent of slavery, who marched with it in its war on Iraq and Afghanistan, and marched with it in its war on the blessed revolution of Ash-Sham and enabled it to slaughter the people of Ash-Sham. And they marched with it in its dirty war against Islam and Muslims under the name of war on terrorism and opened their country for it to establish in them its airports and military bases from which to launch military operations that destroy Muslims countries and kill their children. It found rulers who enacted laws to protect its soldiers from prosecution for war crimes they commit. It found rulers who enabled them on the wealth of their country and gave them the money of their nation. It found rulers who use their armies to be the spearhead in its armies. It found rulers besieged the Mujahideen in Palestine and tightened on them for the satisfaction of America and the Jews. It found rulers who are lions on their peoples and ostriches in front of their enemies…

O people, your rulers are liars and betrayers, servants of America, and guardians of the Jews. So, do not believe their weeping, nor their condemnation, or their denunciation. Their treachery accumulated over their betrayal and over their deception, so that Trump has dared to do what his predecessors Presidents of America did not do.

The Jewish entity, is a usurping entity, which Muslims must eliminate, and save al-Aqsa and return it to the bosom of the Muslims. And the declaration of America’s official recognition of the occupied city of Jerusalem as the capital of the Jewish entity is only an episode in the series of its historical and continuing hostility to Islam and Muslims under the rulers of shame and damage in the Muslim countries. Nothing will stop the arrogance of America and confine it to its limit, eliminate its den from Muslims countries and uproot its influence from them and expel it from Muslims countries an evil expulsion, but the state of Islam, the state of the Khilafah Rashida (righteous Caliphate) on the method of the Prophethood; your political entity which Allah approved it for you. So, do not fail to work to establish it; for in it lie your pride and your glory and by it you cut the hands of your enemies from tampering in your country.

Statements of condemnation, denunciation and regret issued by the regimes in our Islamic world do not save Jerusalem.

Jerusalem is saved by a sincere rage for the sake of Allah from the leaders and officers of the Muslims armies. So, O leaders and officers in the Muslims armies: Rage for the sake of Allah for Jerusalem and Al-Aqsa and move your military sectors towards Jerusalem, shield the dignity of the Ummah and shake the land under the feet of America. Do not make the armies of Muslims a guard for the thrones of the tyrants in the Muslims countries or mercenaries of America and other colonial disbelievers.

O Leaders and Officers of the Jordanian army: We ask you to become enraged for Allah for the support of Jerusalem and Al-Aqsa Mosque, your first Qibla and the place of Isra’a of your Prophet (saw), save Jerusalem and Al-Aqsa Mosque and create the victory as you made in the Battle of Al-Karama (Dignity), to win the glory of this world and the Hereafter, indeed you are capable of that, bi’thinallah.

Let America learn, and let its reckless president know that the Islamic Ummah, which he placed himself and his country in direct confrontation with it, will eradicate the influence of America’s and likes, with the permission of Allah All Powerful Al-Aziz, from the region and even from all the Muslims countries, and will rid its conspiring rulers, the agents of America, and eliminate the entity of Jews and end its existence from Palestine. For the Muslim Ummah knows neither despair nor surrender, and do not fear the enemies of Allah and His Messenger and the believers, at the head of animosity, America.