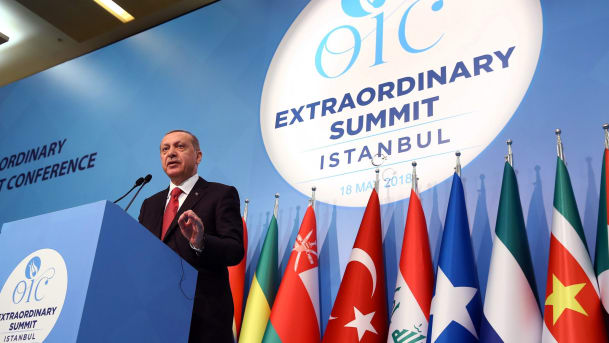 After the decision of America to transfer its embassy to the usurper Jewish entity from Tel Aviv to Jerusalem a summit of the Organization of Islamic Cooperation (OIC) was held in Istanbul at an urgent invitation from Turkey, where 40 countries, including 13 heads of government, 4 presidents of Republic, and 11 countries at the level of diplomatic representation participated in the extraordinary summit. The Summit issued at the closing of its conference the “Final Communique of the Seventh Extraordinary Islamic Summit Conference”. The statement included praise for the puppet governments that tempt the Kuffar in Muslim countries and their wealth and betray the blessed Al Aqsa Mosque, the blood of the martyrs and the Muslim countries. The statement, as usual, included the phrase “condemn in the strongest terms the Jewish entity.” The statement called for international protection of the Palestinian people and dispatching of United Nations’ international peace forces in the region.

It also called for establishing an international independent Committee of Experts to investigate the crimes and massacres committed by the Jewish entity, and to determine the criminal culpability in this matter.

It is not enough to confront America and the usurper Jewish entity with denunciation and condemnation, but rather with a parabolic confrontation! For they have killed Muslims, usurped our Holy Land, transferred their embassy to our Holy Blessed City, desecrated with their filthy boots the sanctity of the pure Al-Aqsa Mosque, and throw Muslims in prisons and took them captives. As for you, you have been condemning for seventy years since 1948! And do not master anything but talk and search for solution from the Kafir colonists! So, is it truly that all what you can do is to call for the formation of a committee of experts and send them to Palestine in order to count the dead and the wounded in Al-Aqsa? Are you really incapable of doing anything but complaining about the Jews for their crimes and massacres to the United Nations and other international organizations? Is this the best that you can do? No, you are able to move your armies at the request of the Americans or the English!

Here you see that 40 rulers of the helpless coward puppets do nothing towards a handful of Jews except issuing statements of condemnation! And the most they do is bragging about sending a committee of experts to determine the crimes of the Jews and count the martyrs in Aqsa! But would this have been if we had a Khaleefah?!

The answer is certainly no, you know very well that if we had a Khaleefah he would have ordered the mobilization of the armies led by the likes of Salah Eddin to uproot the Jewish entity from Jerusalem and Palestine. And if we had a Khaleefah, America would not have dreamed of not only moving its embassy to Jerusalem, but of any American visiting it without permission. For:

“A commander (of the Muslims) is a shield for them. They fight behind him and they are protected by (him from tyrants and aggressors).”

If this is the case, then you must hasten to hold the agent rulers accountable, and work to establish the Khilafah Rashidah (righteous Caliphate) on the method of the Prophethood that will liberate Al-Aqsa from its captivity!