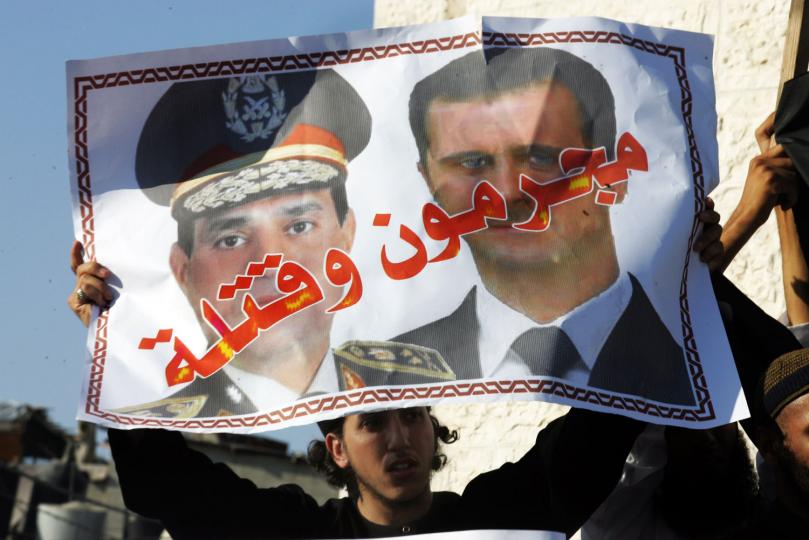 Egypt executed Wednesday nine men suspected of belonging to the Muslim Brotherhood who had been convicted of involvement in the 2015 assassination of the country’s top prosecutor, security officials said. (New York Times, 20/02/2019)

The story of these nine young men who have been executed by the Egyptian regime had the rare opportunity to reach to some kind of news value after their death. We pray to Allah (swt) that He (swt) counts them as martyrs. However, the sad reality is that this is just a tip of the iceberg. Egypt counts hundreds of so-called “political prisoners” who are Muslim men and women who dared to oppose the tyrannical regime. These men and women are imprisoned, tortured and also hanged or sentenced to death or life imprisonment. Some observers even called the Tuesday’s in Egypt “Execution Day.”

Besides some reports of human rights organisations, there is no real or loud voice opposing this unjust treatment committed by this unjust regime. The so-called international society is silent as well as the Muslim countries. They all are watching this tragedy unfolding in front of their eyes and no one is blinking an eye. The false narrative and big lie of the so-called humanitarian values and human rights, which the kafir colonial states promote day in and day out, show out again that it is nothing more than hot air.

Moreover, it’s their core policy to breakdown all kinds of Islamic resistance in the Muslim world in order to maintain their iron grip and hegemony in our lands. Whether it is by invading Muslims lands or by supporting the corrupt leaders of Muslim states. Even clerics like the grand mufti of Egypt Shawki Ibrahim Abdel-Karim Allam and before him Ali Gomaa are deployed to “legalise” the oppression against the Muslims. Under Egyptian law, they are also responsible for reviewing all death sentences. Although their opinion is not binding and merely consultative, they never spoke out against the unjust treatment and dead sentence of Muslim men and woman of this Ummah. Instead, they participated in this oppression. Unfortunately, this of oppression is not only restricted to Egypt. Rather it is, as mentioned, a global policy against Islam and against the Muslims who oppose the status quo. Under the pretext of “war on terror” and “anti-terrorism law”, the tyrants have been given “legal justification” to prosecute Muslims all over the world as they please.

As I write this, ten members of Hizb ut Tahrir in Russia have been sentenced from 11 -16 years of prison under these same “legal justification”. All what they did is to call for Islam and Khilafah in the Muslim lands.

The global policy against Islam and the return of the Unity of Muslims are pushed forward by powerful colonial states and their loyal agents in the Muslim lands. They are cruel, vicious and cunning in achieving their goal and spent billions of dollars and euro’s and rubels. However, when the Russian court stated the long prison sentence to the members of Hizb ut Tahrir, our brave young brothers were laughing and smiling behind steel bars and thanking Allah (swt) and stating that nothing can stop the call for Islam. And they were chanting: “The Ummah wants al Khilafah Islamiyya!” The call for Islam is stronger, it will continue and it will be victorious by the Will of Allah (swt) even if the entire world is against it. The issue is whether you are a part of this noble call to gain the Pleasure of Allah (swt) and His reward or not.