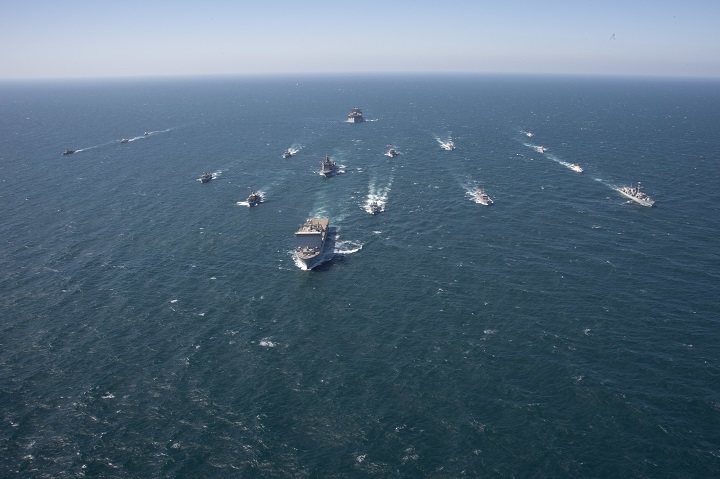 In a step towards normalization with the Jewish occupiers of Palestine – the Blessed Land, Pakistan’s rulers have deployed the Pakistan Navy for joint exercises, under the banner of the International Maritime Exercise (IMX/CE 22), which concludes on 17 February 2022. Thus, Pakistan’s rulers steadily march towards alliance with those who occupied lands of Muslims, even though Allah (swt) said,

“Allah forbids your alliance with those who fight you because of your Deen, and drive you from your homelands.” [Surah al-Mumtahina 60:9].

Instead of taking steps to eradicate the Jewish occupation, Pakistan’s rulers familiarize the enemy with our weapons, capabilities and tactics, even though Allah (swt) commanded,

“And expel them from wherever they have expelled you, and Fitnah is worse than killing.” [TMQ Surah al-Baqarah 2:191].

O Muslims of Pakistan!Islam obliges military response to occupation of any Islamic Land, so what is required when the Destination of the Israa’ of the Messenger of Allah (saw) is occupied?! Allah (swt) said,

“Glory be to the One Who took His servant Muḥammad by night from the Sacred Mosque to the Al-Masjid Al-Aqsa whose surroundings We have blessed” [TMQ Surah Al-Isra’a 17:1].

What compels us to allow the flagrant disobedience of Allah (swt) over the sanctity of Al-Masjid Al-Aqsa? Did Allah (swt) leave us poor and deprived of economic resource, such that we need economic normalization with the occupiers of Al-Masjid Al-Aqsa? How so? The Islamic Ummah has most of the world’s valuable resources under its feet, impoverished only by the wretched rulers of today. Did Allah (swt) leave us weak and deprived of armed force, such that we need military normalization with the Jewish occupation? How so? 176,000 cowardly soldiers of the Jewish entity, clinging to this life, are no match for the 2,787,500 troops of the seven largest Muslim armies, yearning for martyrdom.

Al-Masjid Al-Aqsa awaits its General Salahudin. Under the leadership of the Abbasid Khilafah, Salahudin liberated al-Aqsa on 27 Rajab 583 AH, on the anniversary of the Isra’a of the Messenger of Allah (saw). The Qadi of Damascus, Muhiyudden ibn al-Zaki, then gave Friday Khutbah, proclaiming, “Honor to this army, which He (swt) has chosen to complete the re-conquest! And may salvation be upon you, Salahudin Yusuf ibn Ayyub, you who have restored the spurned dignity of this Ummah!” So is it not high time that we re-established the Khilafah (Caliphate) on the Method of Prophethood, so that our military officers can earn such an honor today?

Al-Masjid Al-Aqsa awaits its Khaleefah Abdul Hamid II. The Uthmani Khaleefah, Abdul Hamid II, repelled Zionist financial bribes regarding Palestine by saying, “Let the Jews keep their millions. If the Khilafah is destroyed in the future, they can then take Palestine without a price. However, whilst I am alive I would rather push a sword into my body than see the land of Palestine taken away.” Indeed, Palestine was only taken after the destruction of the Khilafah, on 28 Rajab 1342 AH. So, is it not high time that we re-established the Khilafah (Caliphate) on the Method of Prophethood, so that we reclaim our lost sanctities today?