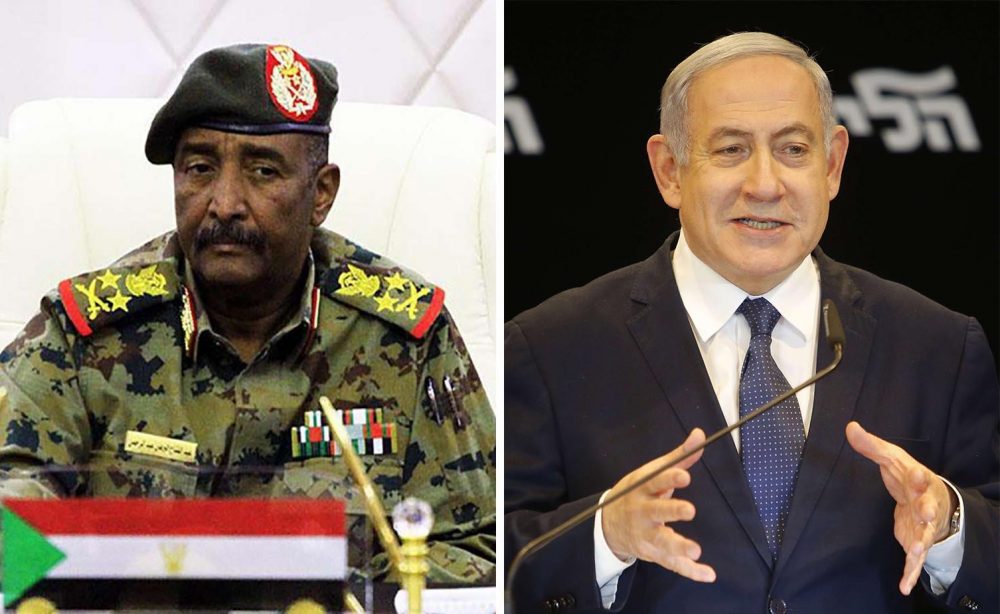 News reports emerged about the meeting of Lieutenant General Abdel Fattah Al-Burhan, Chairman of the Sovereign Council of Sudan, in Uganda, with the Prime Minister of the Jewish entity, Netanyahu, despite the media discretion on Al-Burhan’s visit to Uganda on Monday 03/02/2020. The Prime Minister of the Jewish entity revealed in his tweet on Twitter that they (he and Al-Burhan) agreed agreed to normalize relations between the two countries.

We in Hizb ut Tahrir / Wilayah of Sudan, and in the face of this disastrous meeting, we affirm the following:

First: What Al-Burhan, the President of the Sovereign Council of Sudan, has done is unacceptable to the Muslim people of Sudan, which is a mark of disgrace on his forehead and that of the transitional government.

Second:  The Jewish entity is a usurper entity of the Muslim land, defiling its sanctities, and in origin, serious work must be undertaken to eradicate this monstrous entity, rather than to establish normal relations with it in what is called normalization.

Third: Al-Burhan, with this heinous act, follows the way of the defunct former regime itself, which walked secretly and openly in the course of normalization so Allah disgraced it, and they became history, and his fate will be like theirs if he does not repent and returns to Allah (swt), and atone for this act, by sending armies to liberate Al-Aqsa and purify it from the filth of the Jewish entity instead of sending our sons to fight as mercenaries here and there for a low price paid by Saudi Arabia or the United Arab Emirates from the Ummah’s wasted money to satisfy the disbelievers.

Fourth: Who ever thought that normalization with the Jewish entity would open the door for America’s satisfaction with us and removing the name of Sudan from its blacklist must know that this brings the wrath of Allah, because America’s pleasure means entering into its mila (way of life), Allah (swt) says: وَلَنْ تَرْضَى عَنْكَ الْيَهُودُ وَلَا النَّصَارَى حَتَّى تَتَّبِعَ مِلَّتَهُمْ “And never will the Jews or the Christians approve of you until you follow their religion” [Al-Baqara: 120].

The scrambling of the rulers of Islamic countries to normalize with the Jewish entity despite the slaps (on their faces)  that their master Trump gives them, from the slap of the recognition of Al-Quds (Jerusalem) as the capital of the Jewish entity, ending up with the slap of the century, which gave all of Palestine to the Jews, confirms that these rulers are not from the same nature of the Ummah, but rather from the same nature of subordination and betrayal, and soon, Allah willing, the second Khilafah Rashida (rightly guided caliphate) will be established on the method of Prophethood, and will sweep them away, unite the Muslim countries, and restore Al-Aqsa and other usurped countries back to the arms of the Islamic state.