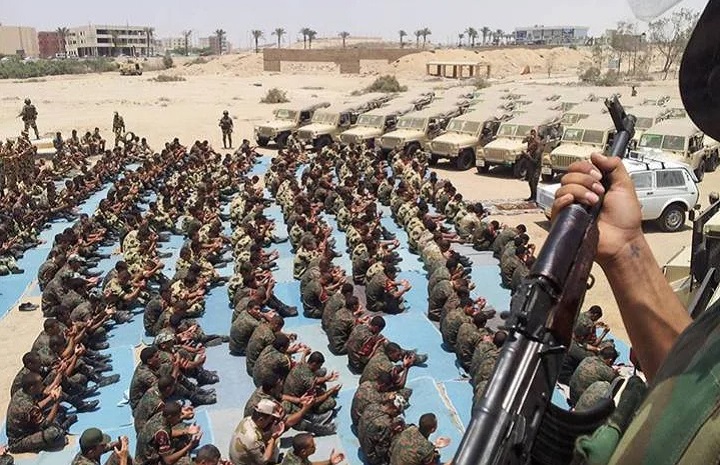 Al-Aqsa Mosque that Allah (swt) blessed and its surroundings is being desecrated and its sanctity violated by the perverse, the Jews, in attempts that are still repeated over the years since the occupation of the Blessed Land of Palestine. Gaza has been shelled with a barrage of severely destructive missiles, because its people supported their brothers and their people in Al-Aqsa Mosque! The sons of Palestine, all of Palestine have revolted against the occupying and usurping enemy, and they are being punished for their adherence to their homes, lands and rights!

However, while all of what has happened by the kaffir enemy occupying an Islamic land is understood, what is not understood is the silence of the region surrounding Palestine of the countries, and the silence of the Islamic world in general… We are not speaking to and addressing the people here, for the people’s hearts and insides are burning, and the people of Palestine are shedding blood with tears, they are moving, demonstrating in the squares and towards the borders, but the regimes stand in their face!

We will not talk about the silence of these regimes, for they are puppet regimes, of betrayal and immorality, whose rulers are hired, they have sold their Deen with a fleeting offer from the world, eager to keep their thrones, and their stomachs grow from the forbidden wealth that they devour from the Ummah’s capabilities and bounties. The best that they can do is condemnation and seek the help from those who supports the Jews – America and Europe – to intervene to stop what is happening! Not to take a breather and prepare for a battle, but to make peace and reconciliation with the usurping entity that occupies the Blessed Land of Palestine, based on the recognition of their existence, an occupation and usurpers!

Today we are talking and addressing the armies stationed in their barracks, holding weapons and equipment, we are addressing the soldiers, the officers, colonels, deans and brigades. We address the air, naval and land forces. We address Sa’ka Forces [Lightning Forces], Commando and special forces with all their different names in the Islamic world in general and the countries near and surrounding the Blessed Land – Palestine especially, some of which are among the most powerful armies in the world, with many equipment, and training! such as Egypt, the Two Holy Mosques, Turkey and Jordan!

But the surprise, O sons in the armies, is that when situation harshens, as is happening today in the blessed land of Palestine and its Al-Aqsa, the Masra and Mi’raj of your Prophet, your mothers, fathers and brothers but rather your Ummah, does not hear you whispering! Or doing anything! Rather, they do not see you except when you confront them and you shoot bullets in front of them and over their heads, but rather at their bare breasts, to prevent them from getting near the blessed land of Palestine, or to suppress their movement in the squares, or towards embassies, or towards those who have appointed themselves as rulers over you and us. But more than that, the Ummah sees you – surprised by the size of what you have in terms of weaponry – rushing to war in Yemen, Libya, or Afghanistan, and before that, towards Iraq, under American or European Western flags, and you die there while you are shooting Muslims like you! As for when it comes to the aggression of the perverse fragmentations of Jews, on your sanctities, their attack on your women, and the demolition of homes over your children in Palestine, and even beyond Palestine, the Ummah does not hear from you what quenches its thirst and heals its breasts! Why is that?! O soldiers, officers and commanders?! Why?!

Is it the fear of the ruler?! In origin he should fear you, for you are his protective force

“Do you fear them? But Allah has more right that you should fear Him, if you are [truly] believers” [At-Tawba: 13].

Is it the link to the position and rank that these people gave you?!

“Whatever you have will end, but what Allah has is lasting. And We will surely give those who were patient their reward according to the best of what they used to do” [An-Nahl: 96]

Is it the love of the world and the hatred of fighting?

Is it the fear of blaming and intervention by the kaffir colonial Western countries that support these puppet rulers?!

“O you who have believed, whoever of you should revert from his religion – Allah will bring forth [in place of them] a people He will love and who will love Him [who are] humble toward the believers, powerful against the disbelievers; they strive in the cause of Allah and do not fear the blame of a critic. That is the favor of Allah; He bestows it upon whom He wills. And Allah is all-Encompassing and Knowing” [Al-Ma’ida: 54]

Is it the fear of injury and pain, after being able to live comfortably?! You did not get involved in the midst of military action without being aware of its nature.

“And do not weaken in pursuit of the enemy. If you should be suffering – so are they suffering as you are suffering, but you expect from Allah that which they expect not. And Allah is ever Knowing and Wise” [An-Nisa’: 104]

Is it that you lack the vision, the plan, and the project for what you are doing and its right path?! We, the sons of Hizb ut Tahrir, are putting the solution in your hands a complete project, with a comprehensive solution of political, economic and social aspects, and a complete perception of your role in the Ummah’s project and its revival, within a constitution ready for implementation and execution, that begins with removing these rulers from their roots and handing over leadership to the sincere of your sons.

Perhaps this window of opportunity is the most appropriate and strongest, because the Ummah around you is ready and moving, they will stand around you if they hear good from you, and they will prevent any attempt to block you if you raise the banner of truth and demand their rights. Yes, it is the Ummah that Hizb ut Tahrir has known and experienced in their goodness, and they know – Allah willing – their strengths. The Ummah and with it Hizb ut Tahrir, only need your initiative to take the first step, represented by ousting the puppet rulers and supporting workers from your brothers in Hizb ut Tahrir, so will you respond?! So that you will be from – Allah willing – whom Allah (swt) has described:

“…and those who gave shelter and aided – it is they who are the believers, truly. For them is forgiveness and noble provision” [Al-Anfal: 74].

Those who fight the Jews today are factions and individuals from the Muslims, so how would it be if you entered this scene?! By Allah, the hearts of Muslims will be filled with joy with you

And they will be with you, in front of you, behind you, from your right side and from your left side. The hearts of Jews and those who followed will drop out of fear

They only display what the All-Knowing and Expert, Glory be to Him, described them:

“…They destroyed their houses by their [own] hands and the hands of the believers. So take warning, O people of vision” [Al-Hashr: 2].

O Officers and Commanders of the Armies: The goodness in you is not destroyed. Trust in Allah (swt), and be with your Ummah. Courage and heroism are not in the badges, stars and golden crowns of honour, but rather it is what you see in the blessed land of Palestine from the sacrifices of children and women before men. And you – with the permission of Allah (swt) – the men of men, if you repent, reform and hold fast to Allah, and are sincere to Allah (swt) in your Deen.

“Except for those who repent, correct themselves, hold fast to Allah, and are sincere in their religion for Allah, for those will be with the believers. And Allah is going to give the believers a great reward * What would Allah do with your punishment if you are grateful and believe? And ever is Allah Appreciative and Knowing” [An-Nisa’: 146-147]

Finally, O Officers and Commanders of the Armies:

“Has the time not come for those who have believed that their hearts should become humbly submissive at the remembrance of Allah and what has come down of the truth? And let them not be like those who were given the Scripture before, and a long period passed over them, so their hearts hardened; and many of them are defiantly disobedient” [Al-Hadid: 16]