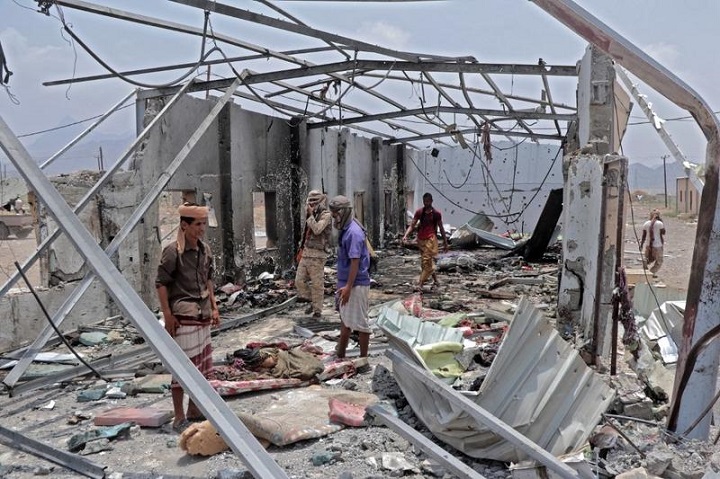 On Sunday, August 29, 2021, a violent explosion rocked a gathering of the 3rd Brigade in Al-Anad camp in Lahj governorate in the south of the country. The death toll from the explosion was 30 people, the bodies of some of them were charred due to their proximity to the epicenter of the explosion, and 106 wounded, their wounds vary, according to what was announced on Monday, 30/08/2021, by Qassem Buhaibah, Minister of Health in the government of Maeen Abdul Malik. Some media outlets had reported that the explosion in al-Anad Camp was preceded by hearing a drone in the sky of the explosion area.

This tragic incident comes to add regrettably spilled blood to the rivers of blood and are still being offered in the arena of the frantic struggle between the Western colonial countries to win their country with men of great strength, an important position, and abundant resources. There is no “she-camel” for the people of Yemen in the international conflict over it, and there are no camels except for the loss of their souls and the spread of hatred among them, and the continuation of colonial influence on the land of faith and wisdom, and its people are fully aware of the saying of the Messenger of Allah, peace be upon him, which was narrated by Ibn Abbas, he said: When the Messenger of Allah, peace be upon him, looked at the Kaaba and said: «مَرْحَباً بِكِ مِنْ بَيْتٍ، مَا أَعْظَمَكِ، وَأَعْظَمَ حُرْمَتَكِ! وَلَلْمُؤْمِنُ أَعْظَمُ حُرْمَةً عِنْدَ اللهِ مِنْكِ» “Welcome oh house, how great you are, and how great your sanctity is! And the believer has greater sanctity with Allah than you” [Narrated by al-Bayhaqi in Al-Shi‘b].

Today, local forces participate in shedding one another’s blood, and other regional ones that were plunged into the conflict to serve the Anglo-American conflict over Yemen. And whether this or that party carried out this attack, in the beginning and in the end, the blood of Muslims is shed at the hands of Muslims! Instead of holding onto the rope of Allah that He commanded us under the ruling of a man who leads us by the Book of Allah and the Sunnah of His Messenger, to fight those who agitate murder in our ranks, and we are divided and fighting among ourselves!

Lawlessness and subsequent crimes in the areas under the control of the agent forces of Hadi and the Transitional regime, and on the other hand, the security terrorism and the subsequent injustice and humiliation of the people in the areas controlled by the agents of the Houthis. All these tragedies are borne by the despicable rulers in the north and south of Yemen. So the people of Yemen must take their hands and break them and break the foreign hand that is strongly extended in the country due to these rulers, and then support their religion by implementing it in a state led by people who have sincerity and awareness.

This incident comes to sadden the hearts of the people of wisdom over the blood of their children, which has been spilled here and there in an international conflict over their country. The Al-Anad camp, which was targeted by the explosion, was reached last July by US forces to continue their previous activities there as an air base in their war against Islam under the guise of terrorism, after they left for their base in Djibouti in 2015.

O people of the country of faith and wisdom: Hizb ut Tahrir has always been keen to address the call to you after the call; in it, revealing the consequences of turning away from the rule of Islam and turning away from what the Sharia commands of you, and Hizb ut Tahrir reveals to you the plots of your enemies and names them to you by name, and guides you to that which contains the good of this world and the bliss of the Hereafter, by returning to the rule of Islam by establishing the second Khilafah Rashidah (rightly-guided Caliphate) upon the method of the Prophethood, in which you will return to your senses and you turn to your Lord and appease Him by following His commands and avoiding His prohibitions, so that He may remove His wrath from your actions and replace it with familiarity and love among you, and the preservation of souls, and the cessation of the flow of blood and security after fear. Is there anyone who is ready to protect the blood from shedding?!