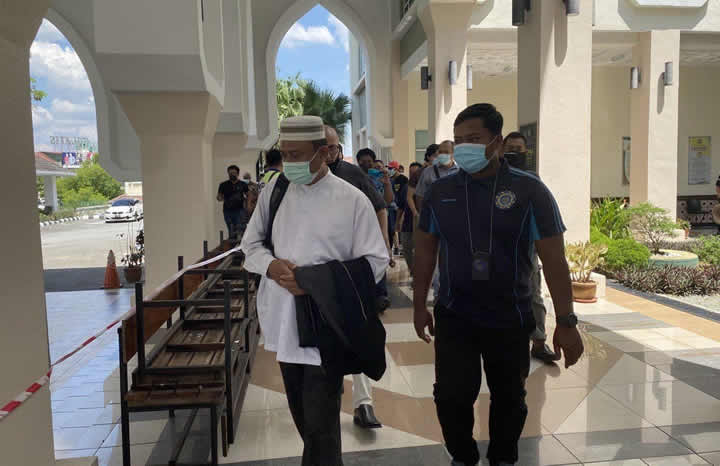 The spokesperson of Hizb ut Tahrir / Malaysia (HTM) was arrested by a group of enforcement officers from the Selangor Islamic Religious Department (JAIS) on Tuesday 30/03/2021, right after leaving the Hulu Langat Shariah Lower Court. The arrest was made after Johor Bahru Shariah Lower Court had issued a warrant of arrest, forcing his attendance to the office of Johor Islamic Religious Department (JAINJ), to give a statement under Section 58 of Shariah Criminal Offences Enactment (Johor) 1997, for an offence under Section 9 and 12 of the same Enactment. This arrest is related to his submission of the Memorandum of Protest to the Johor Mufti Department on 27/09/2020 with regards to the Johor fatwa against Hizb ut Tahrir. The HTM’s spokesperson had been brought to Johor by JAIS’s van right after the arrest. He was locked up, before undergoing a half day interrogation, and released the next day on bond with two sureties.

After the Johor Fatwa Committee issued the fatwa which is full of defamation, fabrication, distortion of facts, and confusion against Hizb ut Tahrir, now, the state’s religious authority resorted to using their power to apprehend the spokesperson of HTM, merely for his statement that the fatwa is full of slander and fabrication against the party! The said religious authority is not only refusing to carry out verification (Tabayyun) before issuance of the fatwa, refuting to engage in intellectual debate, and closing all doors for meeting and discussion, now, they have resorted to arresting a member of Hizb ut Tahrir! How could answering the slander be considered a crime by JAINJ?! What a shameful act!!! They spread all kind of defamation, and then detained those whom they defamed!

We hereby would like to reiterate clearly and firmly that the fatwa by the Johor Fatwa Committee is a “political fatwa” that serves to deter the Da’wah of Hizb ut Tahrir which is working tirelessly day and night towards the resumption of the comprehensive Islamic way of life by re-establishing the Righteous Caliphate upon the method of the Prophethood. Hizb ut Tahrir has been working to implement the Book of Allah (swt) and the Sunnah of His Messenger (saw) in the personal life, in the society and the State – works that has caused the West and their agents to have sleepless nights. Hizb ut Tahrir aims to reunite the Ummah under one State, one leadership and one flag and this strikes fear in the hearts of the Kuffar, which prompts them to mobilize their agents in the Muslim countries to suppress the Da’wah of Hizb ut Tahrir by any possible means.

O religious authority of Johor! All the slander, intimidation, and detention that are perpetrated upon the members of Hizb ut Tahrir will never succeed in halting the Da’wah of Hizb ut Tahrir. You will also fail to delay, even for a split second, the return of the Righteous Caliphate upon the method of the Prophethood which Hizb ut Tahrir is working towards. Take heed of the reminder of Rasulullah (saw) that the slander will definitely return to its owners!

O religious authority of Johor! We are not worried even the slightest bit of the detention and prosecution of any member of Hizb ut Tahrir – we are worried about you instead! We repeat, we are worried about you! What would your answers be in the field of Mahshar, in front of the Most Just Judge when you are held accountable for all the slander, fabrication, detention, and injustice which you have committed against Hizb ut Tahrir and its members!?

Verily, we are worried that Allah (swt) will snap your soul before you manage to repent to Him (swt), as we firmly believe in His (swt) Words;