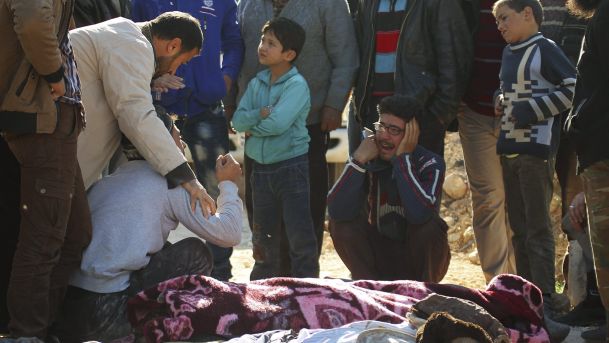 Russian President Vladimir Putin said in a televised statement, “The only right way to fight international terrorism… is to act pre-emptively, to fight and eliminate fighters and terrorists in the territories they have already occupied, not to wait until they come to our home.”

Russian aircraft translates fighting terrorists and the war on terrorism into daily strikes waged against our people in Syria leaving dozens of civilians killed. The martyred and wounded are mostly children and women. The Syrian Observatory for Human Rights has documented that 127 civilians were killed, which includes 36 children under the age of 18, and 34 women over the age of 18, as well as 57 men and a boy – all having fallen victim of the targeting of civilian neighborhoods by the Russian Air Force within 20 days since the start of its military aggression against Syria.

These innocent children are victims of the ambitions of the Western countries and colonial policies in our country, where there is no value for humanity and not for any person even if they are helpless children. They are assisted in that by the states of destruction (the regimes in the Muslim world) which facilitate their mission and stand by watching idly, rather than stopping this internecine war and sending relief to women and children. On top of that, they put all the capabilities of the Muslim countries’ resources, from airports to military bases, at the aggressors’ service, in addition to providing them with the coordination of intelligence and logistics to facilitate flights operations, which claims the lives of innocent women and children. All this is under the pretext of fighting terrorism – while it is the aggressors who are the source and epitome of terrorism!

We also witness the silence of the Muslim armies in front of this injustice. They do not stir to remove it and rescue these defenseless women and children. Instead some of them join with their armies and planes in this aggression to serve the enemies of Islam and achieve the colonial interests for them, which can only be achieved atop of the remains of the Muslims’ bodies and the demolition of their homes and the extermination of entire villages and the displacement of the unsecured. This vindictive Crusader West and its puppet regimes are trying with all their strength and effort to abort the blessed Ash-Sham’s revolution and make the Muslims’ blood and sacrifices be wasted in vain, in order to achieve their colonial goals and ambitions.

We say to the Ruwaibidat (ignorant rulers), your condemnation, as and when it is given, is not worth the ink it is written in. Is this how you support the vulnerable people in Syria?! Even your request to establish free areas from air bombardment to provide safety for the displaced people on the inside, and the demand of the Syrian opposition coalition to the Security Council to move to oblige Moscow to halt its aggression and to immediately withdraw from all Syrian territory, all this does not compare to the least of the sufferings of the people of Syria, who are paying the price of their blessed revolution, which since its inception was declared for Allah. Rather it follows your disappointment to them and subordination to their enemies.

O Muslim armies, we will not tire or relent from calling upon you:

We like to remind you of your predecessors’ victories in defeating the enemies, and supporting the women and children, so that you are inspired to strengthen your resolve and answer the cries of the inflicted women of Ash-Sham and the moans of the wounded children who despite their pain are screaming that they will stay in their own land. We call upon the armies stationed on the borders, who were prevented by these borders to support the children whose wishes are to die to eat merrily in Paradise.

This is your situation and that of your children in the absence of the commander who is aware of the plots of the enemy and due to the dependence of the treacherous rulers on these enemies. These rulers sold you as they sold your wealth and revolutions, in which they tasted liberation from colonialism, and put your children and your women on the tables of villains who do not care for them and do not honour any agreement or kinship. However, hope is in the Ummah as long as the Aqeedah is alive within it, and our eyes are yearning to see a massive Army, whose beginning can be seen but not its end, to eradicate the colonization of the Islamic countries and to defeat the enemies of the Ummah and send them back defeated and dejected to their lands, that is if they will have a homeland.

“Fight them; Allah will punish them by your hands and will disgrace them and give you victory over them and satisfy the breasts of a believing people. And remove the fury in the believers’ hearts. And Allah turns in forgiveness to whom He wills; and Allah is Knowing and Wise.”