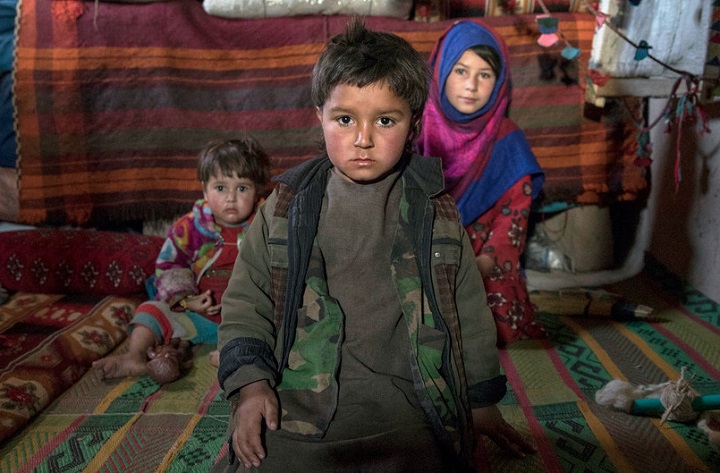 According to the United Nations, Afghanistan is on the brink of becoming the world’s worst humanitarian crisis, with half of the population facing unprecedented levels of acute hunger due to a combination of severe drought, the aftermath of two decades of Western occupation, the withdrawal of humanitarian aid by the international community and the freezing of billions of dollars of government assets by the American government following the Taliban takeover of the country in August. The Executive Director of the World Food Programme (WFP), David Beasley, stated that 95% of people do not have enough food and that almost 23 million Afghanis are threatened with starvation as food security has all but collapsed. He described the country as being on “a countdown to catastrophe” and that it was going to be “hell on earth”. 14 million children also face starvation, while the WFP and UNICEF warned that without immediate life-saving treatment, 1 million children risked dying from severe acute malnutrition. Many are already severely malnourished with nothing but scraps of bread to eat. With the harsh winter months approaching, the desperate conditions facing our Ummah in Afghanistan is predicted to only deteriorate further.

The ruthless and heartless suspension of billions of dollars of aid by the international community, World Bank and IMF to this aid-dependent land, as well as the American administration’s move to cut off the new leadership’s access to $10 billion of the country’s foreign reserves, starving the people of cash, has devastated the economy, health care provision and other public services, causing this catastrophic humanitarian crisis. This is a move aimed at pressurizing the Taliban government to implement a version of Islam compatible with Western secular liberal tastes. Western powers and the international community are therefore weaponizing hunger and starvation as a means to achieve their political agenda of ensuring a secular vision of governance for this land, which they failed to accomplish militarily during their brutal 20-year occupation. They absurdly claim that their actions are aimed at securing the welfare and rights of women and girls in Afghanistan. However, these are the same women and children who are being starved to death, deprived of healthcare and any positive future due to this economic strangulation of the population. According to Human Rights Watch, Afghanistan’s “financial crisis has especially affected women and girls, who face disproportionally greater obstacles to obtaining food, health care and financial resources.”

We say to our brothers in the Taliban, this humanitarian catastrophe unfolding before your eyes is the direct result of dependence on foreign powers and institutions for aid and help. Indeed, organisations such as the UN endlessly issue forecasts of doom for lands such as Afghanistan, while it is its powerful member states are the very ones spinning this web of misery upon nations. Their pledges of aid mean nothing and are besmirched in anti-Islam conditions and agendas. Did 20 years of international aid create anything in Afghanistan but a broken economy and aid-dependent state which had the second greatest number of people facing emergency levels of hunger in the world…and now to take the first ranking position?

Unless the comprehensive Islamic vision implemented by the Khilafah (Caliphate) system is embraced in Afghanistan and the Muslim world, that discards the secular ‘Nation State model’ which entrenches weakness and dependency upon foreign states, then Afghanistan and the region is doomed to a future of permanent instability, economic crises and humanitarian catastrophes. It will be forever in the grip of foreign hands, subject to their dictates and at the mercy of enemies. Allah (swt) says:

“Whoever follows My Guidance shall neither go astray, nor fall into distress and misery. But whoever turns away from My Reminder (That is, neither believes in the Qur’an nor acts on its orders) verily, for him is a life of hardship, and We shall raise him up blind on the Day of Resurrection.” [Ta-Ha: 123-124].