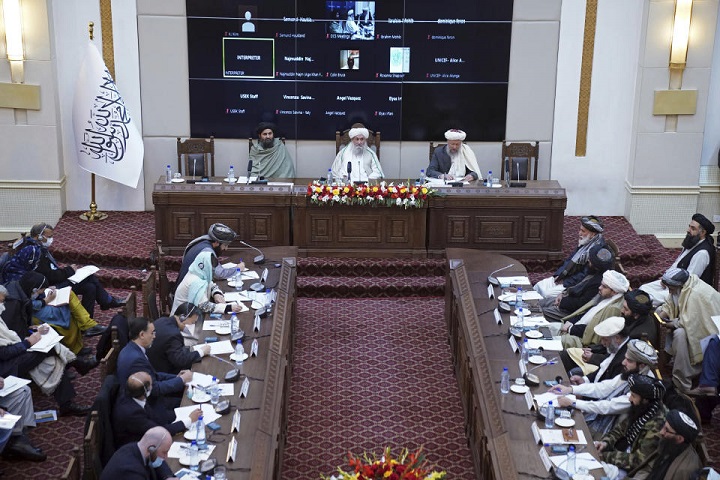 The Islamic Emirate held the Afghanistan Economic Conference in which representatives of 20 countries attended in person while 40 others joined online. This conference was aimed at assessing the economic problems of Afghanistan in different arenas in order to figure out appropriate solutions to the problems.

The Media Office of Hizb ut Tahrir in Wilayah Afghanistan considers the following points to be noted concerning Afghanistan’s economy:

First: The political and economic problems of Afghanistan cannot be solved within its current borders. In 19th century, the contemporary Afghanistan was shaped by great powers in such a way to be always controllable as well as dependent on these powers. By signing various treaties, the colonialists caused Afghanistan turn into a landlocked country, having no access to ocean. For this reason, Afghanistan under its current geography and governance structure cannot be politically and economically independent. Afghanistan will only become a powerful state if it unites with Pakistan and Central Asia. Uniting the Islamic lands is not only an Islamic obligation over Muslims but it will also geopolitically benefit the Muslims of the region.

Second: The economic system is an integral part of the Islamic system. The economic system in Islam is not the Free Market, Socialist, mixed systems and the like of these, but it is an economic system different from other systems that is based on Islamic belief and Sharia rules. The basic principles in Islamic economics is the fulfilment of basic needs of every human, such as: food, clothes, accommodation and fair distribution of resources. It is also the obligation of an Islamic State to provide a dignified life for each citizen regardless of racial, ethnic, and religious discrimination. Unfortunately, the economic system of Islamic Emirate is still ambiguous as its current economic procedures are operating based on the regulations and structures of the previous corrupt government. While the establishment of a legitimate Islamic State and implementation of an Islamic economy is one of the vitally crucial responsibilities of the current ruling leaders.

Fourth: Islam forbids the Islamic State to be politically and economically dependent on another country. Therefore, it is equipped with self-sufficiency and industrialization policies to address key problems of imports as well as dependency on foreigners. This industrial policy is based on Jihad and extending the call for Islam. Undoubtedly, in order to secure self-sufficiency policies and industrial products, there is a strong need for educational infrastructure, technical training programs and research opportunities. For the time being, Afghanistan and the region have abundant natural reservoirs and a young workforce that help facilitate an industrialization policy. Such a policy will also save the government from a tax-dependent economy, relieving the burden of pressures from impoverished people too.

Fifth: The currency in Islam is backed by gold standard. The Islamic State must print banknotes based on its real wealth, which is gold and silver. The reason for this is that the Sharia rules of Islam have determined gold and silver as the only standard for currency. Allah (swt) has only determined gold and silver to be used as the amount [Nisab] of Zakat (alms). Presently, the Afghan currency is backed by US dollar. This has not only made Afghanistan’s economy dependent on the US and the West, but has also led to inflation and the destabilization of the Afghan currency.

We encourage you to grab the economic system and policies that are derived from Sharia sources, which, on the one hand will lead to satisfaction of Allah (swt), and on the other hand, will address the prevailing economic problems.