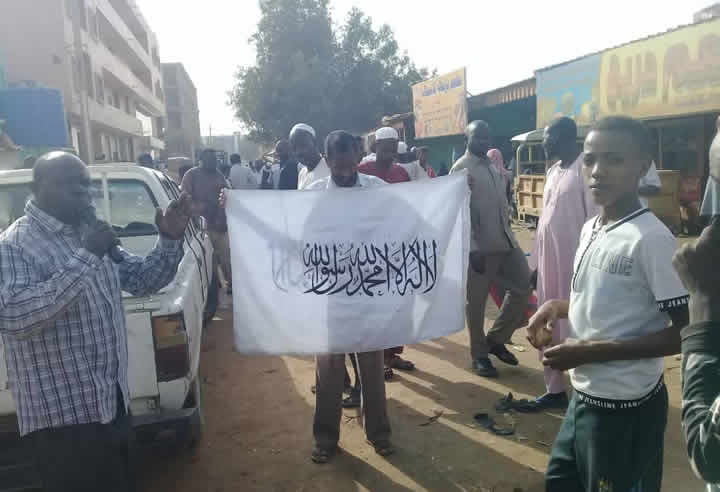 To commemorate the Centenary of the demolition of the Khilafah (Caliphate) on 28 Rajab 1342 AH, and to remind the Ummah of what happened to it as a result of the demolition of its Khilafah; that by destroying it, the rulings of the Lord of the Worlds in governance, politics, economics and so on were absent, Muslim countries were torn apart, and the kaffir colonial West dominated them. So, our glory was lost, our dignity was wasted, our honour was violated, our wealth was plundered, our blood was spilled, our lives were lost so we became like orphans at banquets of the wicked (oppressed). To remind the Ummah of its miserable condition, and to motivate the men in it to work for the sake of restoring it, a Khilafah Rashidah (rightly guided Caliphate) on the method of Prophethood, under the guidance of the honourable Amir of Hizb ut Tahrir, the eminent scholar Ata Bin Khalil Abu Al-Rashtah, may Allah protect him and give victory by his hands, Hizb ut Tahrir / Wilayah of Sudan is marking this memory during the month of Rajab Muharram 1442 AH, where the activities of the third week were as follows:

1- The Ummah’s Issues Forum was held, entitled: “Islam is a Complete System of Life that Requires the Building of the Khilafah,” on Saturday 14 Rajab 1442 AH, corresponding to 27/2/2021 CE, and the forum was broadcasted directly on Omdurman satellite channel, in which two papers were presented; The first is entitled: “In the field of intellectual Struggle, Hizb ut Tahrir Renews Muslims’ Understanding of Islam as a System of Life Implemented by the Khilafah State,” presented by Ustadh Hatim Ja’far (Abu Ali), lawyer – member of the Hizb ut Tahrir Council in  Wilayah of Sudan. The second paper is entitled: “Establishing the Khilafah is the only Way Out to the Crises Facing the World,” presented by Ustaadh Muhammad Jami’ (Abu Ayman), assistant spokesman for Hizb ut Tahrir / Wilayah of Sudan.

2- Holding public addresses in public places, and lectures in mosques in the capital and the provinces, a reminder of the Ummah’s pride in the shadow of the Khilafah, and its humiliation under the regimes of the states of harm, and it asks the Ummah to work to establish it with Hizb ut Tahrir, and their details are as follows:

C- Al-Kalaklat district in the capital, a speech with the title: “Establish it, O Muslims, the Khilafah is an Obligation and Promise”, on Thursday,13 Rajab 1442 AH, corresponding to 24/2/2021 CE

E- The city of Kosti’s address entitled: “Establishing the Khilafah is a vital issue for the Islamic Ummah” on Friday 14 Rajab 1442, corresponding to 25/2/2021 CE.

F- The city of Wad Madani, a lecture entitled: “The System of Government in Islam is Exclusively the Khilafah” on Monday, 17 Rajab 1442 AH, corresponding to 1/3 /2021 CE.

I- The Dakhinat area in the capital, an address with the title: “The Practical Method for Establishing the Khilafah” on Wednesday, 19 Rajab 1442 AH, corresponding to 03/03/2021 CE.

3- Continuing to work diligently in distributing small posters that carry great and sublime meanings. During the week, the members of Hizb ut Tahrir distributed tens of thousands of these posters to shop owners, cars, and others bearing phrases such as:

And other phrases that show the greatness of Islam and its Khilafah state on the method of Prophethood.