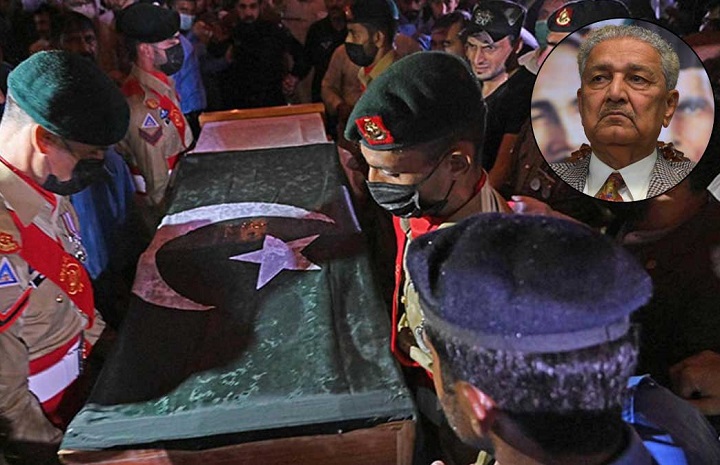 With a spontaneous outpouring of heartfelt condolences, Muslims around the world are grieving since Dr. Abdul Qadeer Khan, the founder of Pakistan’s military nuclear program, passed on to the Mercy of His Lord (swt) on 10 October 2021. Allah (swt) said,

“Indeed we belong to Allah, and indeed to Him we will return.” [TMQ Surah al-Baqarah 2: 156].
We ask Allah (swt) to grant Dr. Abdul Qadeer abundant forgiveness, bountiful rewards and a high station in Paradise. It was the dynamic Dr. Abdul Qadeer Khan and his dedicated team of scientists and engineers that achieved nuclear capability, by conducting cold fusion tests within the short span of a few years. They firmly established that the brilliant sons of the Islamic Ummah are fully capable of acquiring the latest military technology, with state support, motivated by the powerful desire to gain the pleasure of Allah (swt).

With limited resources and many obstacles, we have developed nuclear bombs, MIRVs, cruise missiles, drones, submarines and warships. Yet, tragically, our capability was exploited by the crusading America to occupy Afghanistan for twenty years. Moreover, the betrayal by rulers of Muslims ensured similar tragedies in Syria, Iraq, Myanmar (Burma), East Turkestan, Assam, Blessed Land-Palestine and Kashmir, despite our capabilities. However, it is the Khilafah that will consolidate the forces and military technology of Pakistan, Turkey, Iran, Saudi Arabia, Egypt, Algeria and Indonesia, to transform us into the world’s most powerful fighting force. Indeed, under the leadership of the visionary Khilafah (Caliphate) state, we will develop military prowess far further, including stealth technology, artificial intelligence, mechatronics and quantum computing, ending the military dominance of the Western powers, through their corrupt world order.

It is that international order which is designed to perpetuate Western supremacy, whilst we can never progress due to the shackles of the West’s international law and colonialist institutions. Pakistan’s nuclear program itself is a clear example of our need to ignore the shackles of the current world order, whilst Washington continuously demands that Pakistan destroys its long-range ballistic missiles. Similarly, achieving economic independence is impossible through bowing to the IMF and accepting dollar hegemony in international trade, whilst our legal and constitutional independence is inconceivable, without ignoring the international community, as is seen in the case of our brothers in the Taliban movement, who are being pressurized to abandon Shariah, through the shackles of the Doha Agreement.

The fruits of limited resistance to the West’s oppressive international order include Pakistan’s nuclear program, a valuable asset both for the Ummah now and for the soon-to-be-established Khilafah. So what will happen when the legal, economic, social, political and military domination of the West is overturned, after the re-establishment of the Khilafah? The Khilafah will unify Pakistan, Afghanistan, Central Asia and beyond, as a self-sufficient, powerful state, shaking the Eurasian theater and forcing a continued retreat by the US, whilst ensuring the liberation of occupied Muslim Lands, including Kashmir and Palestine. So, O Armed Forces of Pakistan! Will you not seek this honor for the sake of your Lord (swt), in Whose Hands your souls lie? Come forth to re-establish the dominance and prestige of our great Deen, Islam, through granting your Nussrah to Hizb ut Tahrir for the re-establishment of the Khilafah (Caliphate) on the Method of Prophethood. Allah (swt) said,

“O you who believe, if you support Allah, He will support you, implanting your feet firmly.” [TMQ Surah Muhammad 47:7].