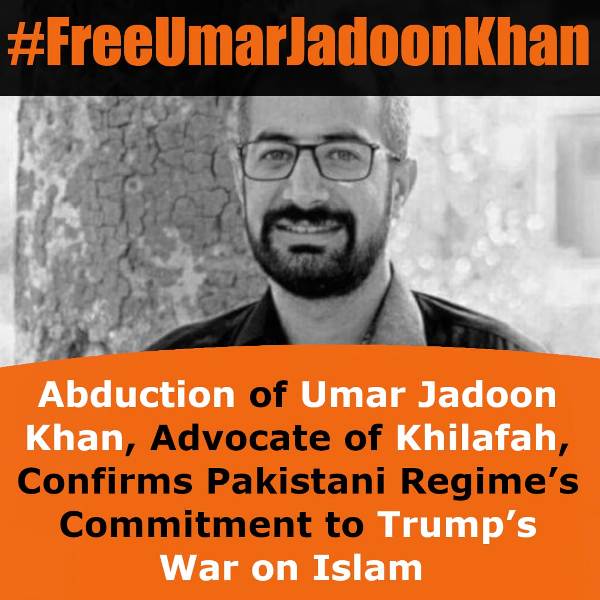 On 30 January 2019, Umar Jadoon Khan, an advocate of the Khilafah, was abducted in Peshawar by security personnel. Umar was seized whilst distributing a press release condemning the Pakistani regime’s facilitation of US-Taliban talks, to secure a long-term regional presence, in the form of US private military contractors and regular troops in US bases. Muhammad Umar Khan is a lawyer in the Peshawar High Court, from the noble Jadoon clan. Umar’s father, Muhammad Jamshed Jadoon, was a well-known judge who was martyred for his refusal to compromise on truth in a legal case and was awarded the Tamgha-e-Shujaat (Order of Bravery). Umar suffers from epilepsy, whilst his widowed mother has only recently been discharged from hospital after a severe chest ailment.

The abduction of Umar came only a day after Pakistan’s Prime Minister, Imran Khan, approved of recommendations to amend the Pakistan Penal Code (PPC), to declare enforced disappearances a criminal offence. Yet, despite condemning enforced disappearances, the Bajwa-Imran regime allows its security personnel to abduct those who call for undertaking political expression against colonialist hegemony in the region. Despite pre-election claims of challenging colonialism, Imran Khan has sold himself, the security of the country and the safety of the people for the cheap price of being the new face of the American Raj in Pakistan. Still making now stale claims of wanting the Khilafah Rashidah, Imran Khan persecutes those who call for Islam, whilst letting the US viceroy, the US ambassador, roam free and contact whomsoever he wishes from the military and political leadership.

Allah (swt) said, إِنَّ الَّذِينَ فَتَنُوا الْمُؤْمِنِينَ وَالْمُؤْمِنَاتِ ثُمَّ لَمْ يَتُوبُوا فَلَهُمْ عَذَابُ جَهَنَّمَ وَلَهُمْ عَذَابُ الْحَرِيقِ “Those who persecute the Believers, men and women, and do not turn in repentance, will have the Penalty of Hell: They will have the Penalty of the Burning Fire.” [Surah Al-Buruj 85:10]. It is a heinous crime to persecute those who call for Islam as a way of life, yet the sinful, disobedient rulers of Pakistan persist in pursuing Trump’s war on Islam. It is upon the Muslims of Pakistan to demand the release of the advocates of Khilafah from their enforced disappearances, whether it is Umar Jadoon, or Muhammad Junaid Iqbal and Syed Nabeel Akhter, who were abducted on 15 September 2017, or Naveed Butt, the Official Spokesman of Hizb ut Tahrir in Wilayah Pakistan, who has been held in abduction since 11 May 2012. And it is upon the Muslims of Pakistan to stand with the brave advocates of the Khilafah in the duty to re-establish the Khilafah (Caliphate) on the Method of the Prophethood, which will finally bring an end to the era of forceful, oppressive regimes. Ahmed narrated that RasulAllah ﷺ said, «ثُمَّ تَكُونُ مُلْكًا جَبْرِيَّةً فَتَكُونُ مَا شَاءَ اللَّهُ أَنْ تَكُونَ ثُمَّ يَرْفَعُهَا إِذَا شَاءَ أَنْ يَرْفَعَهَا ثُمَّ تَكُونُ خِلَافَةً عَلَى مِنْهَاجِ النُّبُوَّةِ ثُمَّ سَكَتَ» “Then there will be rule of force, and things will be as Allah wishes them to be. Then Allah will end it when He wishes. And then there will be a Khilafah on the Method of the Prophethood.” And then he fell silent.