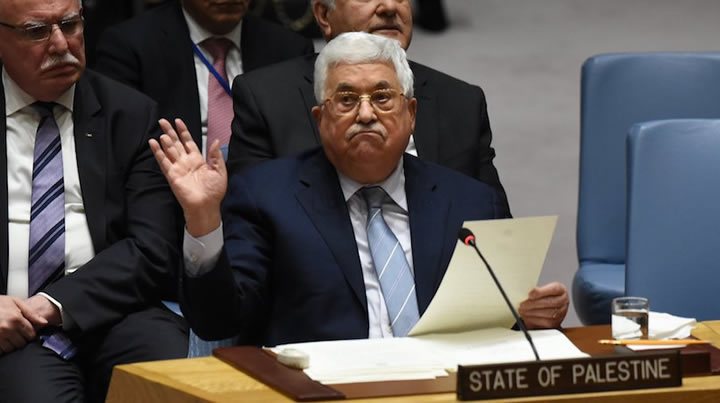 Surrendering, Submissiveness and Attachment to the Ropes of the United Nations and the Colonial Powers that Created and Propped the Jewish entity

Palestinian Authority President Mahmoud Abbas presented to the UN Security Council on Tuesday 20/2/2018 an agenda for an international conference aimed at resuming negotiations to revive the two-state solution; a solution that would legitimize the occupation of most of the Blessed Land by the Jewish entity and make the future demilitarized “enduring” Palestinian state a protector of the Jewish entity and a bridge to normalization with it, in light of the internationalization of Al-Quds (Jerusalem) and the introduction of an additional occupation of Palestine under the name of international forces and the third party …

Despite the recognition of Abbas and his cronies that the United Nations and its Security Council failed to achieve “peace” and the implementation of the relevant international resolutions, they still cling to this colonial organization and to America and Western countries, which despite their patronage of the Jewish entity, they have been accepting them as mediators and rulers. Abbas is still attached to the ropes of the unfair decisions of the international organization, rather, he sees it, “the top of the pyramid, the highest entity to which the peoples of the world seek protection; after you, we rest our issue to the Almighty”!!

“Grave is the word that comes out of their mouths; they speak not except a lie.”
[Al-Kahf: 5].

Is the creation of events and the launch of initiatives take place through adherence to decisions that are not respected even by those who enact them?! If a believer is not stung twice from one hole, then how long will Abbas continue to demand the implementation of the resolutions of the United Nations after it failed; rather this organization conspired not to implement 705 resolutions issued by the General Assembly and 86 resolutions of the Security Council on Palestine?! How many times should Abbas and his authority and his organization be stung, so that they will draw lessons from and be chastened, and how long will they continue to practice treachery and deception?!

The PLO, its authority and its president, who claim to reject Trump’s decision to recognize Al-Quds as the capital of a Jewish entity, are accomplices in the crime, rather, they are the forerunners of it. They are the “fighters” for the treachery two-state solution, the ones who divided between the West and East Jerusalem, and through claiming to represent the people of Palestine they recognized the legitimacy of the occupying Jewish entity and its right to exist! All what is happening now is the fruit of a malicious tree that they planted its roots in the abomination by their hands. And here is Abbas, completing the process of abandoning and conspiring against Palestine, as he wants to internationalize Al-Quds and international forces in Palestine to add a new occupation to Palestine over its occupation by the Jews. He insists on excluding the Islamic depth of the issue of Palestine by making our right on it related to the Canaanites, and not to the rule of Allah in it!!

It is time for the Islamic Ummah to stop the tampering of the Organization, its Authority and all the Muslim rulers of Palestine and to make a clear and explicit declaration that Palestine is an Islamic land and that its solution is bound by no one else but to it. And that it will take over its leadership by removing the puppet regimes that have tied it for decades, and will establish the Khilafah Rashidah (righteous Caliphate) on the method of the Prophethood. And then it will be victorious with horror and the Jews and the colonists will turn their backs in retreat, and all who wasted the land, the honour and the sanctities will regret, but it will not be a time for regret…