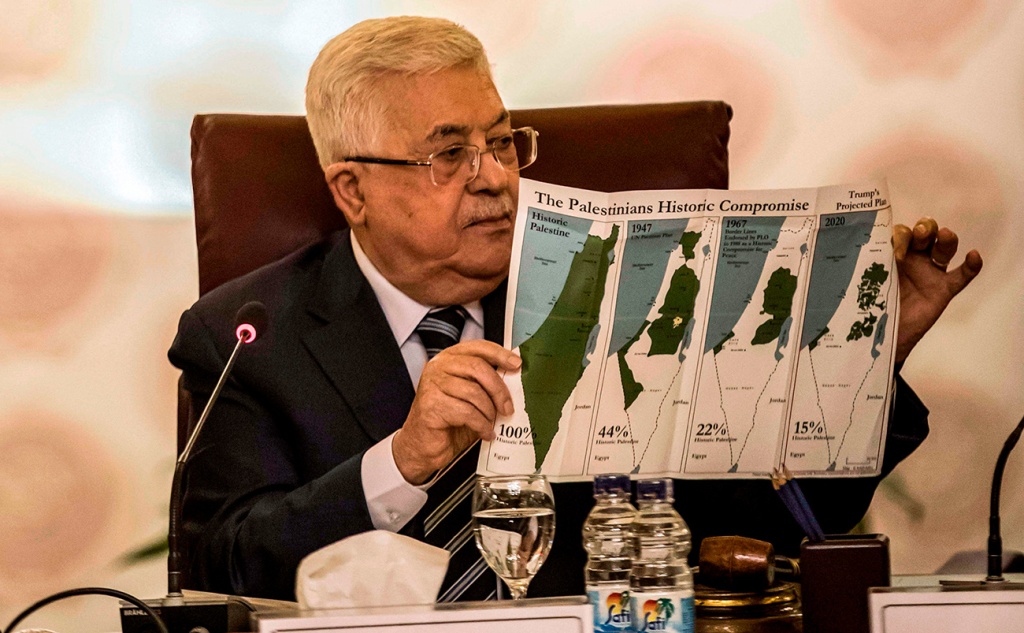 A group of traitors of Allah and His Messenger ﷺ met in the Arab League to form a position on the shameful deal, due to their position towards the Trump’s deal which is weak and conspiratorial. The meeting was at the level of foreign ministers and not the presidents, so they delivered their usual haunting speeches in which they affirmed their adherence to the treacherous solution of the Palestinian issue which is based on the recognition of a Jewish entity and the two-state solution and concession to the Jews to 78% of the Blessed Land. Also, they affirmed their adherence to the Arab initiative, which is, the full normalisation of the Jews in public because their undeclared ties to a Jewish entity have not ceased. What confirms their betrayal and conspiracy is that they did not touch upon, in their speeches or in their final statement, except through giving a hint of closing down the embassies of a Jewish entity or ending the agreements signed with it, hence their meeting was weak, disgraceful and reassuring of a Jewish entity.

Abbas took the opportunity, as usual, to brag about his role and his disgraceful authority to provide free services to the Jewish entity that they would not have dreamed of had it not been for the efforts of the Palestinian Authority. His insolence has reached to the extent that he said while reminding the Jewish entity of being their agent and his role of malignant security: “I am now able to protect… I am able to bring you a piece of information that you have never dreamed of bringing it”! He stressed that his only way to reach the state is negotiations and nothing but negotiations, pointing out that he does not back down from the negotiations even if they did not make any progress forward!

Abbas’s bragging about his adherence to negotiations and providing services to the Jewish entity is a blatant challenge to the feelings of the Muslims and his insolence that he would not have dared to express had he not been sitting among a group of traitors like him, and in a charade, which its beginning, ending, and its events are quite known.

Abbas goes on to speak out in enmity against Allah and the righteous believers, by asserting that he will follow the enemies of Islam from the Kufr states by saying: “We have 83 security protocols and agreements and we are ready to cooperate with any country that fights terrorism and we are following this policy and will not retreat from it!” In other words, he affirms his commitment to fighting Islam. He thought that America and the Jewish entity would not degrade him, however they demanded a new betrayal greater than the Oslo Agreement, and because the required betrayal is greater than Abbas and his organization and from all the countries and rulers. They found themselves in front of a shameful position they could not confront, for the reality of the Jews is clear in Allah’s Book for the people who believe, Allah (swt) says: أَمْ لَهُمْ نَصِيبٌ مِّنَ الْمُلْكِ فَإِذاً لاَّ يُؤْتُونَ النَّاسَ نَقِيراً “Or have they a share in the dominion? Then in that case they would not give mankind even a Naqira (speck on the back of a date-stone).” [An-Nisaa: 53]

Moreover, they do not fulfill any agreement, however weak it is, Allah (swt) says: أَوَكُلَّمَا عَاهَدُوا عَهْدًا نَبَذَهُ فَرِيقٌ مِنْهُمْ “Is it not (the case) that every time they make a covenant, some party among them throw it aside?” [Al-Baqara: 100]

Additionally, because he is clinging to the enemies of Islam, he stressed his appeal to the international community, the Security Council and the General Assembly to implement international resolutions, so that they might put pressure on the Jewish entity to give him and his Authority a semi-weak state whose primary mission is to protect the Jewish entity. However that is far-fetched. And Allah (swt) says: بَشِّرِ الْمُنَافِقِينَ بِأَنَّ لَهُمْ عَذَابًا أَلِيمًا * الَّذِينَ يَتَّخِذُونَ الْكَافِرِينَ أَوْلِيَاءَ مِنْ دُونِ الْمُؤْمِنِينَ أَيَبْتَغُونَ عِنْدَهُمُ الْعِزَّةَ فَإِنَّ الْعِزَّةَ لِلَّهِ جَمِيعًا “Give to the hypocrites the tidings that there is for them a painful torment.* Those who take disbelievers for Auliya’ (protectors or helpers or friends) instead of believers, do they seek honour, power and glory with them? Verily, then to Allah belongs all honour, power and glory.” [An-Nisaa: 138-9]

The ugliest thing in Abbas’s speech is his conclusion, as he cited the noble verse that urges perseverance in Jihad (fighting for sake of Allah): يَا أَيُّهَا الَّذِينَ آمَنُواْ اصْبِرُواْ وَصَابِرُواْ وَرَابِطُواْ وَاتَّقُواْ اللّهَ لَعَلَّكُمْ تُفْلِحُونَ “O you who believe! Endure and be more patient (than your enemy), and guard your territory by stationing army units permanently at the places from where the enemy can attack you, and fear Allah, so that you may be successful.” [Al-i-Imran: 200]

He used the evidence in a place in which he affirmed his neglect of the religion of Allah and the servants of Allah and the stationing of his security services in protecting a Jewish entity! He added to that by mentioning the hadith of the Messenger of Allah ﷺ on the sect that would be victorious on the path of truth, despite his explicit admission that he and his Palestinian Authority are holding on to the betrayal and are loyal to the enemies of Islam, and are apparent by their abdication and abandonment.

O the People in the Blessed Land:

It is not expected from the group of criminals and traitors to the religion of Allah to gather for the liberation of Al-Aqsa Mosque, because its liberation does not require meetings, speeches and conferences, but rather it requires decisions taken by the leaders of armies and staff to announce the general call for fighting in support of Allah and His Messenger, so their legions will not stop except when they have raised Takbeerat (saying Allah is Great) in the courtyards of Al-Aqsa.

As for the deal of the century, it is the result of the Oslo treachery agreement and the PLO’s careless approach. Had it not been for the positions of the PLO and the Arab countries and their strenuous efforts in peace and treachery, the Jewish entity and Trump would not have the greed to this degree. Do not be tempted by their artificial opposition to the deal of the century, they are not masters of themselves to refuse or accept it, but rather the leaders of the authority have a desire for the power, even if the matter is on a pile of stones! For them, power is a big financial investment, but the treachery required is greater than them and they cannot pass it now.

Verily the future of the Jewish entity and their guards will soon disappear, Allah willing, and Jerusalem will be the capital of the second Khilafah Rashida state (righteous Caliphate) on the method of Prophethood and the abode of Islam fulfilling the glad tiding described by the Messenger of Allah ﷺ. وَيَقُولُونَ مَتَى هُوَ قُلْ عَسَى أَن يَكُونَ قَرِيباً“and they say: ‘When will that be?’ Say: ‘Perhaps it is near!’” [al-Israa: 51].