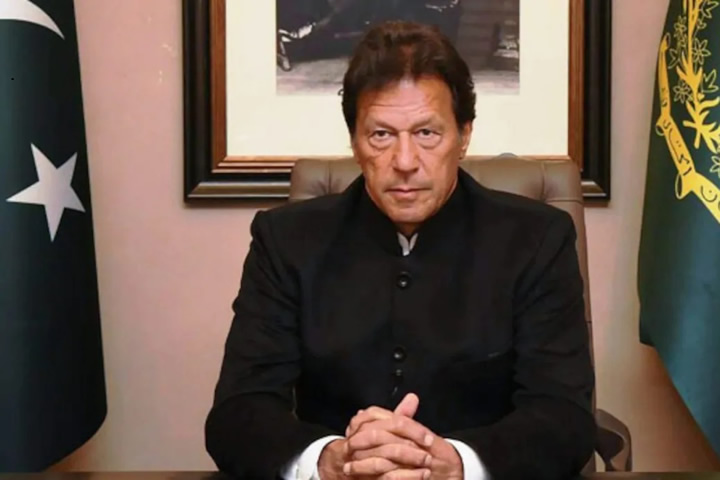 “I call on Western governments who have outlawed any negative comment on the holocaust to use the same standards to penalize those deliberately spreading their message of hate against Muslims by abusing our Prophet (PBUH),” Pakistan’s Prime Minister Imran Khan said on 17 April 2021, the day before the regime opened fire on Muslims demanding the expulsion of the French ambassador, in response to Emmanuel Macron’s support for blasphemous cartoons.

Comment:
The Bajwa-Imran regime claims the Madinah State is its model, but does nothing to practically secure the honor of the Messenger of Allah (saw) who founded it. Worse, the regime begs the crusaders to desist, even though they have harbored hatred towards the Messenger of Allah (saw) for centuries. Despite pledging to do so on 20 April 2021, the regime has made a U-turn on expelling the ambassador of France, with the lame excuse of upsetting the European Union (EU).

Pakistan’s rulers will never secure the honor of the Prophet (saw). The state of Pakistan was created in the name of Islam, but was not established on the law of Islam, such that the Quran and the Sunnah are the sole basis of the constitution. The current constitution declares national interest as the supreme interest, rather than the interests of Islam. So when Muslims of Pakistan pressurize rulers to take effective steps, they reply that Pakistan alone cannot face the wrath of the crusaders. All the current states in the Muslim World are based on secular laws, so no ruler will ever ensure the protection of the honor of the Prophet (saw).

When the Muslims had their Khilafah, whenever the crusaders dared to defame the Messenger (saw), they faced the wrath of the Ummah, through threat of the mobilization of the armed forces of the Khilafah. Today, the Islamic Ummah wants a tough stance from the current rulers; however, this will never happen until the current secular ruling system is demolished and the Khilafah State is resurrected over its ruins.

In the Khilafah state, the ruler, the Khaleefah, takes pledge that he will only implement the Quran and the Sunnah. He is accountable for his pledge, so he can never say that action against blasphemers is not in the national interest. In Islam, there is no interest except the interests of Islam. The Muslims of Pakistan and all over the world must demand from their fathers and brothers in the armed forces to extend their Nussrah to Hizb ut Tahrir, for the re-establishment of the Khilafah (Caliphate) on the Method of the Prophethood, so that the honor of the Messenger of Allah (saw) is protected.

“Those who obey Allah and His Messenger and fear Him and avoid disobeying Him: such, indeed, shall triumph.” [An-Nur, 24:52]