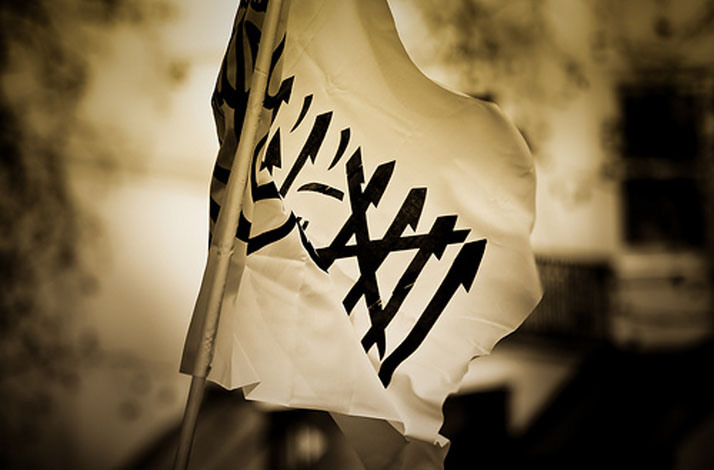 Al-Quds Al-Arabi Newspaper published on its website on 01/01/2016 an article by Dr. Faisal al-Qassim entitled “The simple question to those dreaming of the return of the Khilafah” … and in a simple answer to his question, we say:

“We must be realistic,” from this premise, the one who “dreams” to establish the righteous Khilafah (Caliphate) on the method of Prophethood, according to Dr. al- Qassim’s view will end up outside the time and place of the era of the American cowboy.

We do not deny that the question raised by Dr. al-Qassim is posed by many others who set off, in their view, from the restrictive premise of reality, which deeply affected their minds and they became afraid to dream of disengagement from the shackles of slavery to the American Cowboy, which is greatly emboldened with the mightiest physical weapons and controls the economy of the world and even the Internet, and even is in control over the oxygen of life that have become impossible, according to these people, except with the consent of the American Uncle Tom !!

Al-Bukhari narrated from Abu Abdullah Khabab Bin Al-Aratt, may Allah be pleased with him, who said: We complained to the Messenger of Allah ﷺ when he was lying on his cloak in the shade of the Kaa’ba, we said: ‘Why don’t you ask Allah to support us? Why don’t you do dua for us?’ He ﷺ said:

“Before your time, a man would be taken and placed inside a dug up hole in the ground, then a chainsaw is brought and placed on his head and he will be cut into two halves and combed with iron combs separating his flesh from the bone, and all that does not deter him from holding on to his Deen, by Allah, Allah سبحانه وتعالى will complete this matter (Deen) until the passenger from Sanaa is going to Hadramout fears only Allah and the wolf from attacking his flock, but you hasten.”

Yes, this is the promise of the Prophet ﷺ the sincere and trustworthy, who promised Surraqa Bin Malik, who pursued him in pursuit of the prize announced by Qurayish to the tribes that whoever will capture Muhammad ﷺ, dead or alive, he will get one hundred camels, «كيف بك يا سراقة إذا لبست سواري كسرى؟» “O Suraqa, what do you think of wearing the bangles of Kisra (Chosros)?” Surraqa said, ‘Kisra the son of Hormuz owner of the White Palace in the cities (Mada’in)?’ He, peace be upon him, said: «كسرى بن هرمز» “Kisra Bin Hormuz”.

Back then Kisra was one of the most powerful men of his time. And time passed and Muhammad ﷺ who left Makka after being rejected, hiding in the dark, and whose blood was wanted by Qurayish, returned to it as leader, a conqueror and was backed by thousands of swords and spears. The days turned again, Muslims were governed by Omar al-Faruq, who removed the kingdom of Kisra and the Muslims carried the booty to Bait ul Mal, Al-Farouk Omar called Surraqa Bin Malik and dressed him in Kisra’s shirt and placed his crown on his head, and put his bangles on Surraqa’s hands, then Umar said to Surraqa: How amazing to see a simple Arab man of the son of Mudlij with Kisra’s crown on his head, and his bangles on his hands. Truly, Allah Almighty is the King to whom belong the heavens and the earth and what is between them, and if He سبحانه وتعالى wants something, He only says to it: Be. Allah سبحانه وتعالى is not disabled by the throne of America nor Russia or the throne of the tyrants of the earth.

We know that from universal laws that nations will have conflicts among them, the conflict between the truth and falsehood exists until Allah سبحانه وتعالى inherits the earth and its inhabitants, and this conflict will witness many rounds where there will be winners and losers, rise and fall:

“And these days [of varying conditions] We alternate among the people”

The Mongols the enemies of Islam have managed in the past to invade Baghdad, the capital of the Khilafah at the same time as the Crusader forces were desecrating the place of Isra’ of the Prophet ﷺ, and despite those black pages in the history of our Ummah, Allah سبحانه وتعالى had sent a sincere leadership that reunited the Muslims and their leaders to defeat both attacks by the Crusades and the Mongol and the removal of the traces of their aggression. Allah سبحانه وتعالى also sent to this Ummah Sultan Muhammad Al Fatih to realise the glad tiding of the Messenger of Allah ﷺ:

“You will open Constantinople, the best leader is that leader and the best army is that army”.

“The city of Hercules will be opened first”, meaning Constantinople.”

We trust in the promise of Allah to make His Deen prevail.

“They want to extinguish the light of Allah with their mouths, but Allah will perfect His light, although the disbelievers dislike it *It is He who sent His Messenger with guidance and the religion of truth to manifest it over all religion, although those who associate others with Allah dislike it”

As for what Faisal claims of American power, it reminds me of the saying of Al-Haq سبحانه وتعالى:

“The example of those who take allies other than Allah is like that of the spider who takes a home. And indeed, the weakest of homes is the home of the spider, if they only knew.”

Yes, the physical force that is not based on the true power it is a flimsy perishable force. Wasn’t it Britain that imposed the opium trade on the Chinese people and wiped out the subjugated people, or wasn’t it America and Russia (that sold their weapons worth $156 billion to “developing” states between 2011-2014), or the Jewish entity in Palestine not one of the crimes that is a proof of the sins of Western civilization. It was better for Faisal Al-Qassim, to separate the truth from falsehood, and the truth as witnessed by the enemies. Former US Ambassador Dan Simpson acknowledges in his article published in the Pittsburgh Post-Gazette on 30/12/2015, that America is the head of universal evil and that there will be no peace on earth before it stops the arms trade, the trade of death.

The renowned British historian Arnold Toynbee, warned in his famous book “Civilization Under Trial” of Western civilization, despite all its impressive achievements, it is doomed to decay and disappear because they are not based on the foundations of strong religious faith, and warned his people who are unaware about the greatness of Islam, not to be overconfident of the deceptive technological progress of their civilization which will inevitably collapse (pages 85-86), and to learn from the fate of their predecessors of nations and civilizations that prevailed then perished (p. 84). Not only that, but he called on his people to discover the Islamic civilization, which will take the lead in the future. And he explained that the Islamic Ummah, despite what it faces from temporary setback, it is prepared to repeat its victory over the Western civilization, just as it did before in the liberation of Syria and Egypt from the Hellenic dominance which lasted for a thousand years, and as it managed under the leadership of Nur ud-Din Zinky and Salah ud-Din and the Mamelukes of defeating both attacks from the Crusades and the Mongol (p. 187). Toynbee predicted that the center of the world’s civilization will be in the arc stretching from Baghdad to the Ferghana valley.

As for the Toyota cars and the US dollar, leave this nonsense Faisal; the Islamic Ummah has wealth and qualified people who will enable it to assume the leadership of mankind, but by the message of Islam based on truth and justice and not on the colonial criminality. The Islamic Ummah is the best nation sent to mankind, when it holds on tightly to the rope of Allah, and on Islam which is based on the concept of

“There is no compulsion in (accepting) religion”

It has spread by the power of the truth and persuasion, not by nuclear bombs and chemical weapons and explosive barrels. And if you wish to discuss and debate the reality of the Western challenge and the method to face it to revive the Ummah and the liberate mankind from its sins, injustice, and aggression, we welcome this anywhere and any time you choose.