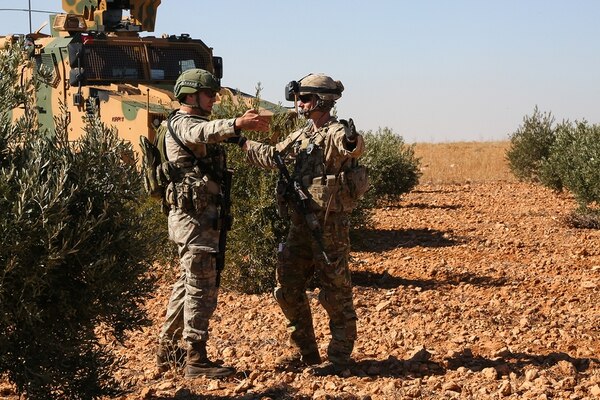 President Recep Tayyip Erdogan said that an agreement is reached with the US on a safe zone in Syria, and the process here will start by the establishment of the joint operations center with the Americans. President Erdogan who continued by citing that the meetings will proceed, said “But now, a step has been taken. I will not name a date, but together with the US, it was decided to create an operations center. With the creation of the operations center, the process will begin. Thus, the question whether a step is taken or not, finds its answer. The main issue was to take a step in the eastern Euphrates and we are currently doing this with the Americans”. (News Agencies)

Comment:
The discussions continue between America and Turkey on a safe zone that is foreseen to be created in northern Syria for a long while. In this regard, it is decided among the parties to establish a “Joint Operations Center”. In this connection, a US military delegation made some inspections in Şanlıurfa.

While Turkey wants to carry out an operation in northern Syria as soon as possible, America carries out a stalling policy towards Turkey. While America seems to give positive answers to the requests of Turkey on the one hand, it stalls Turkey on the other hand. Together with the fact that meetings on this issue between the US and Turkish officials continue, it is known that no any critical results are obtained from the said meetings. In addition to this, if Turkey is going to carry out an operation in eastern Euphrates, it will be possible by America’s approval and consent. Unbeknownst to and despite America, Turkey cannot take even a single step.

The safe zone issue desired by Turkey can be evaluated from several aspects:

1. Through the operations, Olive Branch and Euphrates Shield carried out previously by Turkey, Ghouta and Aleppo was handed over to the regime. Now, the same treacherous plan is put into action again. Hay’at Tahrir al-Sham, being in the first place, has been brought under control by Turkey likewise all other armed groups in Idlib, through the observation towers it created, and made them comply with the American plan. Additionally, it paved the way for carrying out operations in Idlib by Russia and the regime, by sharing intelligence with Russia through these observation towers. Therefore, by such steps Turkey has taken, the last ring of the betrayal chain is completed and the way is paved for handing over Idlib to the regime. In other words, the handing over of Idlib to the regime will be realized by ensuring the movement of local people to the so-called safe zone or other areas, as a result of the bombardment of Idlib by Russia and the regime.

2. Regardless of how the revolution will end up, kafir America will never be sure of Syria as before. Even if it obtains the result it desires, Syria will no longer be the old Syria. America will live with this fear. It wants to put an obstacle between the safe zone or buffer zone to be created and its agent Assad. In other words, it wants to prevent the sincere Muslims who are going to rise from the ashes, from securing al-Sham.

3. Erdogan and his party lost votes during the local elections held on March 31 and June 23 and lost the election in Istanbul and Ankara particularly and other metropolises. America even accepted the arrival of S-400 missiles in Turkey which he objected, in order to make his man Erdogan flourish again before the public opinion. In the same way, it says that a mutual agreement is reached on the “safe zone” issue in some respects to strengthen the hand of Erdogan, who experiences a loss of elections, before the society and his party; on the other hand it stalls Turkey in the matter of safe zone.

The truth is that Turkey has completely followed the American line on the Syria policy since the beginning of the revolution in 2011 up to now. It has never taken even one single step without its permission and consent. As I have mentioned above, Olive Branch and Euphrates Shield operations carried out by Turkey are realized within the consent of America. In addition to this, the agreements signed between Turkey, Russia and Iran in Sochi and Astana are steps taken within this framework. Turkey betrayed the Syrian revolution by such steps and sold the Syrian people to the regime for a little price. In addition to this, it did not respond to the attacks held by the regime, on its bases in Idlib. Turkey gets a taste of derogation upon derogation. It still considers America as an ally who supplied the PYD with tens of trucks, while seeing the latter as a terrorist organization. In the same way, it sees Russia who kills Muslims in Syria and Idlib as friend and keeps silent about Russia’s massacres.

Thus, Turkey will hand over Idlib to the regime through a safe zone in northern Syria desired to be created by America. Turkey takes part in the massacres of America, Russia and the vile regime by this betrayal.

Finally, not only Syria but the entire world today is not safe. Every place and every town where the imperialist Kuffar are present is unsafe. The imperialist westerners have failed to make the world a safe and livable place. As it was in the past, making the world a safe harbor again, will be only possible with the Khilafah Rashidah (rightly guided Caliphate) Bi’idhnillah…