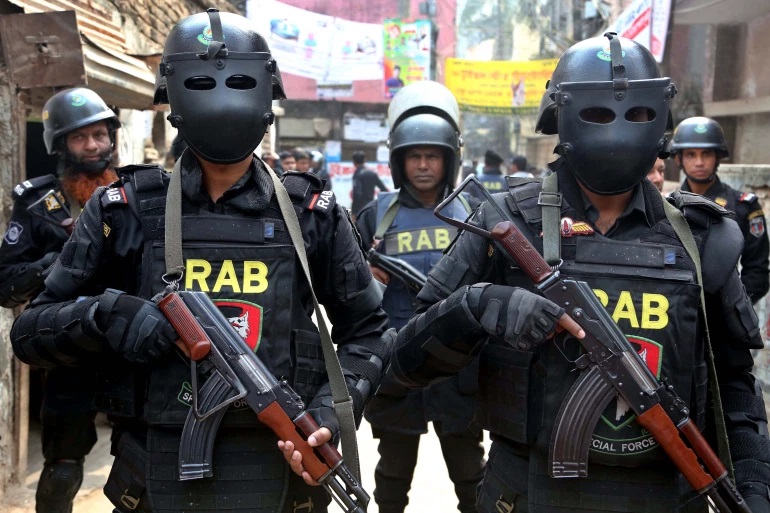 A criminal gang is colluding with Bangladesh’s security forces to extract bribes for state contracts and job positions, all the while maintaining powerful links with the country’s Prime Minister Sheikh Hasina, an Al Jazeera investigation has found. “All the Prime Minister’s Men” reveals how Haris and Anis Ahmed, both convicted of murder, are being protected by their brother, a high-ranking military officer, after they fled abroad to escape law enforcement. Their brother is General Aziz Ahmed, head of the Bangladesh Army and close confidant of Prime Minister Sheikh Hasina, leader of the ruling Awami League. (Source: Aljazeera News, 01 Feb 2021)

Comment:
This news has drawn people’s attention to some open-secret facts about Bangladesh regime.

Firstly, though they claim to be ‘democratically elected’, Awami League government derived no authority ‘from the people’, but rather they are led and protected by a gang of thugs. Rulers are so dissociated from their subjects that they do not even care about what people might think of them. These rulers neither trust the people nor do they have faith on their system. They are blatantly sponsoring and nurturing a gang of thugs for their own protection and safety.

Secondly, the ‘rule of law’ is nothing more than a mere slogan in this system. The top leader and her men are above the law and they can get away with any crime.

Thirdly, local news agencies despite having detailed knowledge about state-sponsored corruption can neither report them nor hold these rules accountable for their misdeeds due to the fear factors that have well been implanted in society.

Though the system has miserably failed to solve people’s daily issues like health care, safe food-water, education, housing etc., the secular rulers are not to be blamed for this. An infallible image of the leader is maintained by all means. The racketeering has been expanded from top to the bottom of the system leaving no hope for reformation. The only way forward is to throw away this corrupt system and to reorganize the society on the basis of Islamic ruling by establishing the Khilafah Rashidah (rightly guided Caliphate) upon the method of the Prophethood.