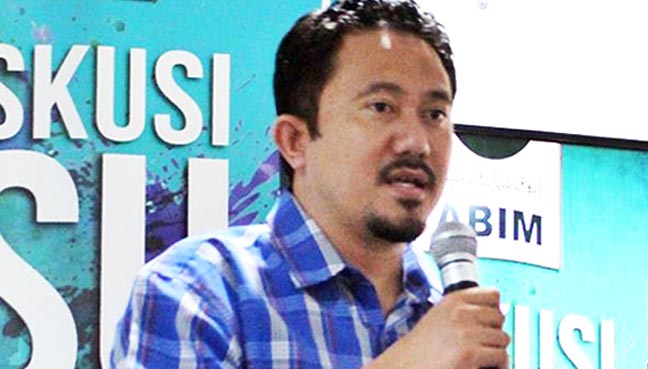 In an interview with Business FM (BFM) 89.9 on 12/06/2018 the President of the Muslim Youth Movement of Malaysia (ABIM), Mohamad Raimi Ab Rahim, had been asked by the interviewer Mr. Sharaad Kuttan, among others, the following question:

“We have in this country groups like Hizb ut Tahrir… you know… and such, who come up with a very strong statement about the implementation of Shariah saying God’s law trumps the democratic process for instance, where do you think on balance is the conversation weighted today? Are those groups who wanted Caliphate… you know… one end of the spectrum, are they winning ground today?”

In his answer, the President of ABIM said inter alia:

“Young Muslims around the world got frustrated with their governments and the elections and this was reason such groups as Hizb ut Tahrir and others came, they are frustrated with the tyrant government in their countries and they go saying from ballot to bullet, they stop believing in election, in democracy and they start having a new utopian idea of going to Syria, or joining ISIS and becoming Boko Haram. So this segment of people just like Zainah mentioned is not homogeneous, but this particular segment of young people who are eager to make change and to manifest their religious identity into institution and into government or even Caliphate, need to have room for engagement, we need to engage with them. It is only too late when they have decided and made up their minds to go for… you know… some places for jihad and then only you came and counter them”.

First of all, we thank Mr. Sharaad Kuttan for asking such a question which clearly shows his concern over Hizb ut Tahrir. We hope to be invited to a similar program should he wish to know more about Hizb ut Tahrir and our work in this country or at the global level. Even though we are of the opinion that the President of ABIM did not answer the said question appropriately, our concern is on his answer about Hizb ut Tahrir that is rather misleading and this drives us to offer a few clarification points as follows:

–    We agree with the President of ABIM that many young Muslims across the world are frustrated with their governments, but it should be pointed out that Hizb ut Tahrir’s establishment, actions and reactions are not based on frustration. Our calls (da’wah) to Muslims are not motivated by the frustration of Muslims, rather, these calls are commanded by Allah (swt). We call them to Islam whether they are, or not, frustrated with their governments. Hizb ut Tahrir was established in response to the command of Allah (swt): وَلْتَكُنْ مِنْكُمْ أُمَّةٌ يَدْعُونَ إِلَى الْخَيْرِ وَيَأْمُرُونَ بِالْمَعْرُوفِ وَيَنْهَوْنَ عَنِ الْمُنْكَرِ وَأُولَٰئِكَ هُمُ الْمُفْلِحُونَ “Let there be among you a group that invites to the good, orders what is right and forbids what is evil, and they are those who are successful” [Ali-Imran: 104]. Our work is solely based on the divine obligation, not just as a panacea to the frustration of the Muslim Ummah, which would also Insha Allah be relieved with calls to Islam;

–    In regards to the tyrants and corrupt governments, our duty is not to point guns at them nor do we ask other Muslims to do so. Our duty is to account them, to urge them to repent to Allah (swt) and stop the evils and oppressions that they perpetrate against the people and urge them to uproot the man-made systems that they implement and adhere to. We account them firmly and consistently that they must rule with what Allah (swt) commands them to. At the same time, we advise and call upon all Muslims to carry out the same duties;

–    Apart from that, Hizb ut Tahrir has been working to revive the Islamic Ummah from the severe decline that we are witnessing today and to liberate it from the thoughts, systems and laws of Kufr, as well as the domination and influence of the Kufr powers. We also aim to restore the Righteous Khilafah State (Caliphate) on the method of Prophethood, so that the ruling by what Allah (swt) has revealed can be realized in its entirety and the Muslim Ummah will be united under one single political umbrella as she had been in the past;

–    With respect to those frustrated young Muslims referred to by the President of ABIM who have turned from “ballot to bullet”, we hope that he did not mean to include Hizb ut Tahrir because if he did, it is a total fabrication and lie against us. Hizb ut Tahrir does not believe in ballot or bullet in making changes. It should be made clear that although we oppose democracy, we also oppose any form of violence in changing the government as both approaches are prohibited (haram) in Islam. Hizb ut Tahrir has been working in Malaysia and all over the world since its establishment in 1953, only within the political and intellectual spectrum as we follow exactly the footsteps of our Prophet ﷺ who prohibits any political party from engaging in any violent activities;

–    It must also be mentioned that Hizb ut Tahrir disagrees with whomsoever that travels to Syria to fight amongst Muslims. Also, Hizb ut Tahrir does not recognise ISIS or Boko Haram as representing an Islamic State, and as a matter of fact they are not even a state; they are just armed groups whose activities are not in line with Islam;

–    In terms of “engagement” with those frustrated young Muslims that the President of ABIM suggested, we are agreeable to the suggestion and we wish to extend this to all Muslim groups including ABIM itself, to have a serious series of engagements within the spirit of Islam and brotherhood, so that we can work together in the right path to establish the Deen of Allah (swt). With such engagements, we can understand one another and as Islamic movements we can strengthen one another in facing various challenges from all corners, including those of the liberalists and secularists;

–    With regards to jihad, we perceive that the President of ABIM mentioned the issue in a negative way. Jihad is a divine obligation from Allah (swt) and is the peak of Ibadah in Islam. Hizb ut Tahrir mentions very clearly that jihad must be carried out by the state i.e. by dispatching Muslim armies to wage wars against the Kuffar who wage wars against Islam and the Muslims. Muslim rulers have to declare jihad to those Kuffar who kill and oppress Muslims in all corners of the world; who perpetrate unjust acts against Muslims, who insult Islam, our Prophet ﷺ and the Muslims etc., which make them the enemy of Islam. Jihad is the most noble Ibadah that will shine the light of Allah (swt) into a country ruled by the darkness of Kufr. What is happening in Syria, Afghanistan, Iraq, the Blessed Land of Palestine, Myanmar, Kashmir and other countries where these lands are invaded and our brothers and sisters are killed inhumanely by the Kuffar, are consequences of the lack of jihad that should have been declared by Muslim leaders across the world. Those Muslim leaders have not only displayed cowardice and betrayed the Ummah, worse, they are agents of the Kuffar and are very loyal to their masters. Rather than blaming the Muslims who go for jihad, the President of ABIM should have blamed the Muslim leaders who failed miserably to despatch armies of jihad in defending the Muslims; and

–    Last but not least, even though the President of ABIM seems to disagree with the idea of “manifesting religious identity into Caliphate”, we ask him to properly check and study what our noble scholars and ulamas say about the Caliphate. Insha Allah we believe that he will find those scholars and ulamas do not differ in their opinions that Caliphate is a divine obligation from Allah (swt) on every Muslim to establish it, preserve it and protect it by all available means. We make dua to Allah (swt) that He will always lead the President of ABIM to the truth.