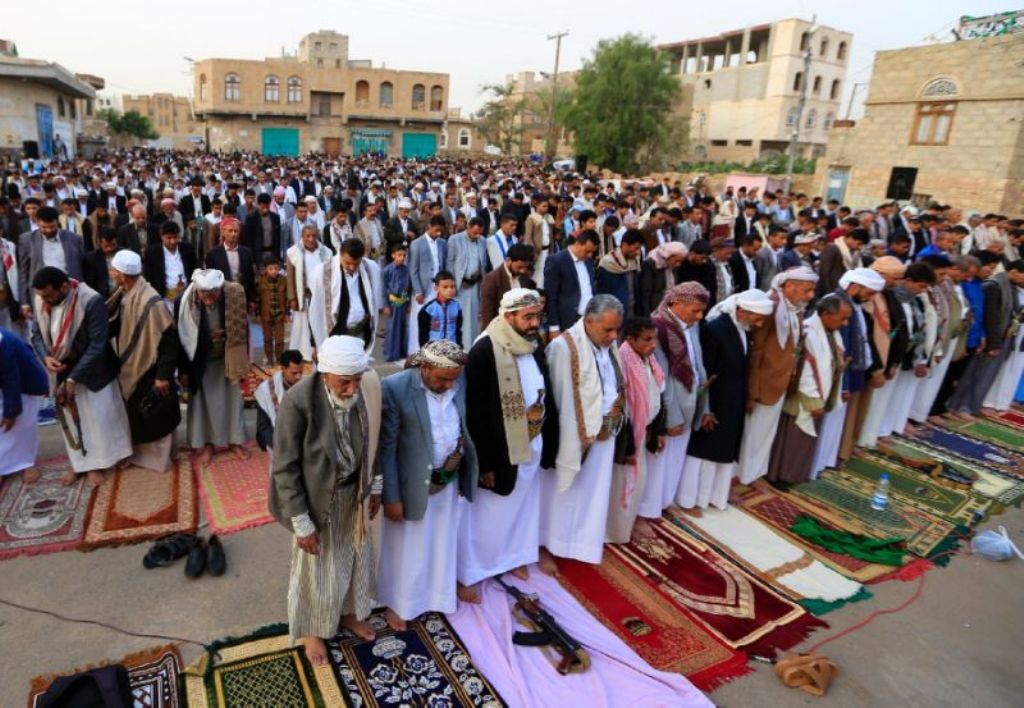 On Monday, 3rd June 2019 CE, the Al-Saud regime of Riyadh announced that Tuesday evening is the first night of the month of Shawwal 1440 AH, and that Tuesday is Eid ul-Fitr, followed by the Al-Nahyan regime of Abu Dhabi. Accordingly, it was inevitable that the regime of Abed Rabbo Mansur Hadi and his cronies in Aden to follow their predecessors and their Ministry of Awqaf to declare to those under their authority to match what Riyadh announced about the completion of the month of Ramadan, the coming of Eid and the sighting of the moon of Shawwal. Shortly afterwards, the Dar al-Ifta in Sana’a announced that it was not possible to see the crescent moon of Shawwal in the coastal city of Hodeidah and considered Tuesday as the completing day of the month of Ramadan.

Neither factions, the ones who announced the end of the holy month of Ramadan and the start of the month of Shawwal or the ones insistent on fasting who abstained from receiving the Eid, asked where the evidence of breaking the fast is «صُومُوا لِرُؤْيَتِهِ وَأَفْطِرُوا لِرُؤْيَتِهِ». “Fast at its sighting and break the fast at its sighting.” and that ascertaining sighting of the new moon of the month of Shawwal with a witness obligates upon Muslims all over the earth to comply with the witness.

The two ruling factions in both Sanaa and Aden have not ceased to deviate from the orders of Islam, of what Allah and His Messenger have ordered, and what Allah and His messenger forbade, starting with the prohibition of shedding Muslim blood on the two fronts of fighting for four years in sacrifice to the British-American international conflict against Yemen, and ended up complying with the command of the Prophet ﷺ for all Muslims, «صُومُوا لِرُؤْيَتِهِ وَأَفْطِرُوا لِرُؤْيَتِهِ». “Fast at its sighting and break the fast at its sighting.”

It was not sufficient for those who share the ruling in Yemen to humiliate the dead who they shot dead, and they think that they were doing well, but they extended beyond them to the living ones with the actions that divided them into two factions: one fasting and the other breaking-fast in one country after they were united in fasting and Iftar!

Is it sufficient for the wise people of Yemen to realize that both factions are far from the truth in all their actions and statements because they do not result from compliance with the Shariah  rulings, but rather from following self-inclination which tumbles its owner into fire, and to stop justifying for them!

The division of Muslims today into conflicting entities that do not govern by Islam is one of the disadvantages that arise in the absence of a single state that gathers Muslims in a single entity, ruling them with Islam and uniting their fasting and iftar.

All Muslims in all over the world must seek to work with Hizb ut Tahrir, which strives in the way of establishing the second Khilafah Rashidah (rightly guided Caliphate) state on the method of the Prophethood and inaugurating a righteous Caliph who rules them by Islam, unifies their country, unites their day of fasting and their day of Iftar, bringing them to Allah’s satisfaction and distancing them from what angers him.