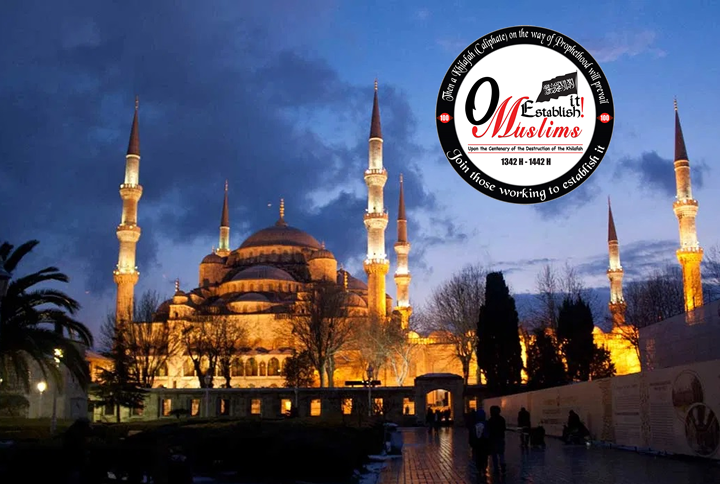 Abu Umamah al-Bahili reported: The Messenger of Allah, peace and blessings be upon him, said,

“The bonds of Islam will be undone one by one, and every time a bond is undone the people will cling to what follows it. The first to be undone will be loss of governance and the last will be the prayer.”

The hadith of the Messenger of Allah (saw) clarifies truths and facts that will encounter the Ummah. So he prophesies about living without the rule of Islam, and a life in which Islam has no trace except for prayer whose veil is removed, as its sisters (obligations) had previously abrogated. And in an environment marked by the absence of Islam from the ruling, and in which the public awareness has decreased to reach the acceptance of the indecency of the sanctity of prayer, in which the young people whom Al-Mutanabi describes in his poetry must prevail: trivialities are magnified in their eyes.

The one who looks at the materials promoted on the media in Muslim countries through drama, market novels, films and even news on feminist sites, whether through traditional media or various communication sites, he finds it focusing notions on showmanship and the pursuit of fame, even at the expense of principles and values. A society absent from the law of Allah and became normalized with evils (munkarat) and seeing it. It suffices to have the headline of the news: “The story of a girl whose family learned that she is pregnant, and then forcibly marries her to an unjust man to cover her” to get millions of views. The headings and the way the sentences are formulated may change, and the events may vary, but they are all poured into one mold that serves a single goal, which is to undermine people’s instincts and change the general taste in society.

This is what happened in the Muslim community. One denial after another, a disobedience that is publicly known, and the sword of the Sultans is hanging over all who deny. The multitude is silent, afraid of the sword, and it fears the ruler and forgets the ruler’s Lord. The rebellious dare, sins increase, they become the general character, bragged with. So people of obedience become strangers and be described by the public: uncivilized radicals … etc. the terms differ but the meaning is one: (إِنَّهُمْ أُنَاسٌ يَتَطَهَّرُونَ) “They are a people who wish to remain chaste!” [Al-A’raf: 82]

This intellectual garbage that is broadcasted to the masses daily and through thousands of messages and videos, is being heard, and its views exceed tens of thousands, in a weeping phenomenon. Of course, this is not a lesson in abundance, but rather an indication of a disease that is consuming the body of the nation, whose condition has changed. What confirms the ummah’s illness are other symptoms, such as accepting the arbitration of man-made regulations, instead of the law of Allah swt and the low public awareness in the ummah about its status it deserves, and the rules and ways of living as the best of a nation (ever) (Khair Ummah).

The Messenger of Allah (saw) was sent on people of dignity, pride and vanity. One of them would die and would not accept humiliation on himself and his family. And Allah perfected the blessing on them with Islam, so He changed their bad deeds and wiped out the nervousness of ignorance, and made the supremacy for the law, and replaced them with their ugly habits the honor that made them the rulers of the nations in a few years.

The great stature that Muslims have held for centuries and spread from it the guidance of the Messenger of Allah (saw) and passed on his trust that he left for them. This position was absent from them, and the West made great efforts to lose Muslims and their pride in their religion. For many years after the demolition of the Khilafah (Caliphate) and before it, the West has been working to blur the Islamic identity in the emerging generations and turn them into a monster without a face, an identity, or even a value. Then he issued them all things that are libertine as being influential, and occupied them with materialism and utilitarianism. So, except for those who had the mercy of Allah on them, there was an imbalance among Muslims in the balance of values, and the piety in souls has been shaken, even the youth’s self-confidence and the mothers’ confidence in their importance and the necessity of their presence in the family have been shaken, and these two groups after the rulers and scholars are the mainstays of the natural fabric of a strong society.

The hudhud, which the polytheism civilization with its shortcomings and advanced sciences did not dazzle him, was brought up in the custody of a prophet who taught him the true meaning of monotheism. This explains the amazement of the children of Muslims with democracy, missiles and kufr planes and their lack of disgust at their atheism and their transgression against Allah. The young generations from a very early age were brought up in colonial schools and drew from its culture that glorifies matter and degrades religion. Grace became higher and longer than a measure of the favored in their view, and they forgot a good fortune from what they were reminded of.

Our nation has lost after a hundred years of Islam’s absence from life, the most precious thing that Allah distinguished it with, which is its confidence in the principle that possesses and its awareness of his idea and its commitment to his method of organizing the affairs of life. Today, on the 100th anniversary of the Khilafah’s demolition, the terms: fascination, model and homophobia appeared. And on the tik tok, Muslim women appeared, dancing in their hijab in front of the crowd, and their mahrams were watching and listening and not angry for the sanctity of Allah. After a hundred years they were legalized for the obscenity in speech and homosexuality in Muslim countries, and they gained rights, and the one who denies these became criminal, as in the Istanbul Convention. After a hundred years, the Muslim countries over sixty small weak countries that have no sovereignty and no authority over its people. It is governed by the fallen goods of the people, and its affairs are governed by the systems of disbelief. The advocates of rulers appeared to deny all those who deny the rulers their immorality!

Yes, honorable: after a hundred years we look at the Muslims, after they were reluctant to take the reins of leadership, have become on the margins of nations in all fields, although Allah honored them with the true Al Haqq religion and enlightened their insights with the highest idea and purest way, but the longevity between them and Islam in their reality made a deep gap that led them to relapse and live at rock bottom.

Hence, Hizb ut Tahrir, with its leadership and youth, have pledged themselves to return to this nation its glory, and to restore to it its position as the best nation ever that was brought out to the people, and it is based on the nation’s thought and sense, so he left no idea contrary to Islam not criticized, where he is unique in this field among all parties in the Islamic world. And he has the honor, thanks to Allah, in battling the ideas of socialism, nationalism, democracy and others and reviving the concepts of Islam, such as the idea of the Khilafah, the one Ummah – one body – Sharia politics, Islamic economics and social order in Islam and others. And it has been revived in the Ummah, praise be to Allah, the meanings of pride and longing for the arbitration of Islam and the hatred of oppressive rulers and loyalty to the believers.

He wants to return the true meaning of (La Ilah illa Allah) so that humanity is with the Blesser, not with the blessing. And that is only done through the application of Islam as a belief and system, so the Khilafah will return to take care of the affairs of Muslims with Islam and carry it to the world through da’wah and jihad. And he, Insha’ Allah, along with the faithful and the ummah, have come close to fulfilling the good news (bushra) of the Messenger of Allah. “Then there will be a Khilafah in accordance with the prophetic method.” They won’t be deceived by the height of falsehood, assured of the firmness of their vocation (da’wah) and the firmness of its roots in this country, for they are the salt of the earth and its people, believing in the promise of Allah…

“Allah has promised those of you who believe and do good that He will certainly make them successors in the land, as He did with those before them; and will surely establish for them their faith which He has chosen for them; and will indeed change their fear into security—˹provided that˺ they worship Me, associating nothing with Me. But whoever disbelieves after this ˹promise˺, it is they who will be the rebellious.” [Surah An-Nur: 55].