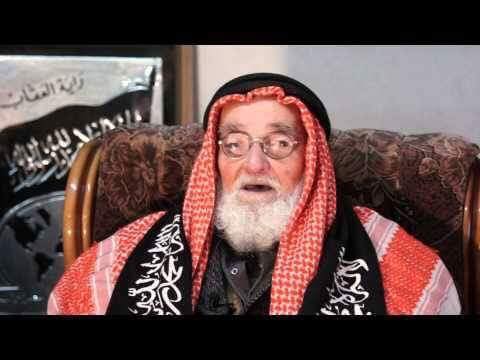 The administrative measures we have is that every Wilayah mourns the death of its own members, and the Ameer mourns those who pass away of the current and previous members of the office…and because Abu Mohammad (Sabri Al-Arouri) is a significant figure in this pure unblemished Da’wah bi’ithnillah, I saw that he be exempted from these measures.

“Among the Believers are men who have been true to their covenant with Allah. of them some have completed their vow (to the extreme), and some (still) wait: but they have never changed (their determination) in the least”.

“Assalamu alaykom wa Rahmatullah wa Barakatuhu, this is a message from my father Shaikh Sabri Al-Arouri to our Shaikh Abu Yaseen:

Assalamu alaykom wa rahmatullah wa barakatuh my brother and beloved Abu Yaseen… May Allah سبحانه وتعالى accept your acts of worship and may every year bring you goodness, safety and stability… My brother, I pray to Allah day and night for your success, protection, safety, and victory in your actions and opinions… may Allah be with you wherever you are; and may He unite us with you soon in Dar-al Islam… Your brother Abu Mohammad Sabri… September/2016… received in private messages” End.

“To the honorable son of the beloved brother, our Shaykh Abu Mohammad Sabri Al-Arouri…

May Allah reward you with goodness dear Khalid of goodness, for you have reconnected us with the dearly beloved, our Shaykh Abu Mohammad, reminding us with that fragrant biography of one of the great men who never weakened in the face of hardships he encountered, and they were many… He kept steadfast, even during his illness he was strong, and in his health he was stronger… How much we would love to meet him under the banner of Islam, the banner of Rasoolullah ﷺ, to recall together those good old days when Abu Mohammad was in that ‘shop’, in which he was a beacon for the Shabab from across the country. I remember that gracious meeting with him when I came to Amman, he was helpful to me at the time, may Allah bless him, and I ask Him سبحانه وتعالى to accept his good efforts in carrying the Da’wah, and continues to do so despite his illness – may Allah cure him. I ask Allah to make his actions weigh heavily on his scale the Day on which neither wealth will be of any use, nor children, [and when] only he [will be happy] who comes before Allah with a heart free of evil… I also ask Him سبحانه وتعالى, that if He hasn’t decreed in His Book that we will re-unite in this life, that He Subhanahu Wa Ta’ala unites us together in the next life, around the Prophet ﷺ and his companions, in a seat of Truth, in the Presence of a Sovereign Omnipotent… O Allah! Accept our call, You are indeed the All-Hearer, the Accepter of Prayers.

Subhanallah… I would love to have met him in this life under the banner of Rasoolullah, but The Most High, the Powerful willed for something else, so I ask Him سبحانه وتعالى to answer the ending of my prayer in my letter above: “I also ask Him سبحانه وتعالى, that if He hasn’t decreed in His Book that we will re-unite in this life, that He Subhanahu Wa Ta’ala unites us together in the next life, around the Prophet ﷺ and his companions, in a seat of Truth, in the Presence of a Sovereign Omnipotent

… Oh Allah! Accept our prayer; You are indeed the All-Hearer, the Accepter of Prayers”.

“Who, when calamity befalls them, say, “Verily, unto God do we belong and, verily, unto Him we shall return.””

May Allah have mercy on you Abu Mohammad, we are indeed saddened by your passing, but we do not say except that which pleases Allah سبحانه وتعالى…

To Allah we belong and to Him we shall return.

Your brother and friend