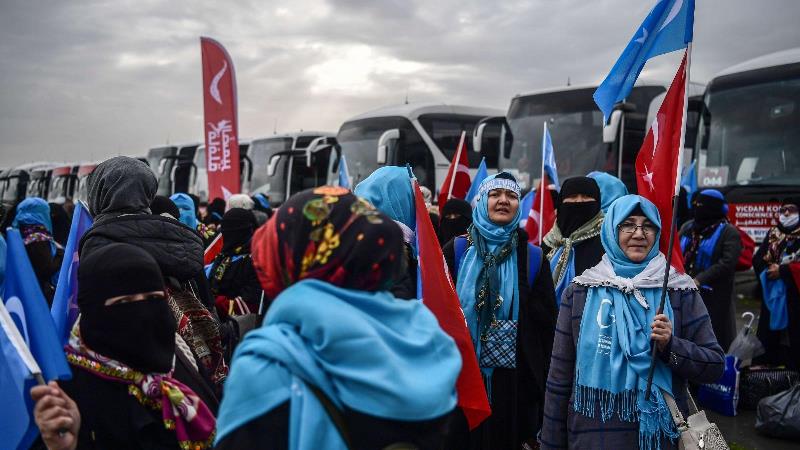 On Tuesday, March 6th, women from across 55 countries set out with the “Conscience Convoy” from Istanbul to Hatay. Their purpose was to raise awareness of the 6,736 women including 417 girls who are languishing in the prisons of the Assad regime, waiting to die under daily torture and rape. The dungeons are full of elderly women, pregnant women and women who had just delivered a baby before their imprisonment. It is known that women who suffered rape and torture often committed suicide if they found an opportunity to. The number of babies born and dying in the dungeons without having seen daylight is not counted anymore… According to Gülden Sönmez, deputy chairman of the Human Rights and Justice Movement (İHAK), and one of the organisers of the “Conscience Convoy”, the Syrian regime, “openly uses rape as a weapon” in this war. She stated, “Women victims of these evil acts are not heard by any country, any international body or international community at all. Nevertheless, they are subjected to crimes against international law, crimes against humanity. It has been seven years [since the war started] and we are still awaiting someone to do something about it”.

For us as Muslims, the inviolability of a woman and the protection of her honour – whether Muslim or non-Muslim – is a requirement of our faith. Thus the Assad regime regards the systematic rape and torture of Muslim women as a means to torment and break the will of the Muslims and force them to give up on their Islamic uprising. Official records state that 13,581 women have been held in Assad’s dungeons since the first day of the Islamic uprising in 2011, many have been raped… Furthermore, it is proven by evidence that more than 65,000 people have lost their lives under the most unimaginable torture, sexual violence and starvation in the dungeons of the Assad regime. According to İHAK, more than 76,000 people, including 116 children and 4,219 women are simply “LOST”, their whereabouts unknown. And during the unscrupulous slaughter of more than 1 million people, we witnessed that those talking of red-lines are colour-blind. 7 million Syrian refugees, the same number displaced within Syria, and almost 14 million in urgent need of immediate aid perish bit by bit under hunger and lack of medicine. More than 10,000 unaccompanied Syrian children who managed to reach Europe have disappeared in the hands of human, sex and organ traffickers.

All the colonialist superpowers have joined hands to protect and support Assad in his war against Islam and the Muslims. Despite this, the Muslims of Syria, the women and the children, are not willing to bow to these crusaders, for their faith in the victory of Islam through the help of Allah (swt) is unwavering. They are steadfast, even in face of the idleness and betrayal of the Muslim leaders, who not only abandoned their responsibilities, but abandoned their conscience to others, leaving it to those who have a sense of humanity to try and save these helpless Muslim women from their tormentors. The hearts of these Muslim rulers and regimes mirror the hearts of the colonialists whom they serve, and they have shown that they care nothing for the honour and safety of the honourable daughters of this great Ummah.

O Muslims! There is no doubt that Allah (swt), the Most Merciful and Most Beneficent, sees your struggles for your sisters, and He (swt) hears your and their invocations. But also it is imperative to work with all your efforts for the re-establishment of the Khilafah Rashidah (rightly-guided Caliphate) upon the Method of Prophethood, the only system that will respond to your calls immediately, and that will not only save your brothers and sisters in Syria, but across the whole world. Have trust in Allah Azza wa Jall for He will surely provide the Muslims with victory over their enemies. This is the fundamental way to the success you desire and deserve. O Officers and Soldiers in the Muslim Armies! Assume your responsibility towards your Deen and your Ummah again! Reject these conscienceless rulers and grant your Nusrah (military support) for the Khilafah to unfold all your strength to rescue your Muslim sisters from the dungeons of the criminal Bashar al-Assad.

“O you who have believed, if you support Allah, He will support you and plant firmly your feet…”