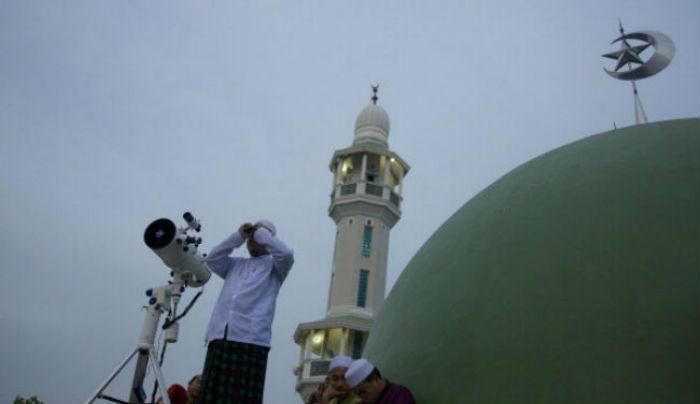 Firstly: I had sent to you, at around 10 pm Madinah time, last night (Saturday night), that the Hilal (crescent) was not seen this night, according to the reports about the ascertaining of the crescent, that were received by us. We usually do not delay the matter of the sighting beyond ten pm or ten thirty pm Madinah time, so that we are not late in announcing to the brothers who are in the east.

This is so that the announcement reaches them before the Adhaan of Fajr, in places like Indonesia. Accordingly, the announcement was made that Saturday 05/23/2020 is the completion of the blessed month of Ramadan, and that Eid is on Sunday 24/05/2020.

Secondly: Then we received news that the Hilal had been seen by three Muslims in Tanzania, in addition to other witnesses in Africa … so we sent a message to our delegate there, to send two to those who saw, to verify this matter. He did so and he sent us an answer, which is as follows:

“5. The 3 witnesses saw a very thin crescent with the two points upwards and the bow facing the sun which had set.

6. They have sworn oaths and declared the shahada before our three shabab.”

Thirdly: We received the delegate’s answer at about one o’clock in the afternoon, Madinah time. This means that the sighting of the Hilal was correct, and the bow of the Hilal was toward the setting sun: “that is, the bow facing the sun which had set,” meaning that what was seen is the Hilal of Shawwal, with the testimony of three Muslims.

Fourthly: After deliberation over the matter, based on the hadith of the Messenger, ﷺ which Imam Ahmad narrated on the authority of Abi Umair bin Anas (ra),

“It was over-clouded for us with respect to the Hilal of Shawwal, so we awoke fasting. Then, riders came at the end of the day and they bore witness before RasulAllah ﷺ that they had seen the Hilal yesterday and so RasulAllah ﷺ ordered that they (Muslims) break their Fast in the midst of their day and that they go out for Eid tomorrow.” And Bayhaqi narrated in Sunan alKubra from Rabee bin Hirash from a man of the Companions of Prophet ﷺ that,

“The people disputed over the last day of Ramadan, so two Beduins came forwards and bore witness before the Prophet ﷺ, by Allah about the Hilal yesterday evening, so RasulAllah ﷺ ordered the people to break the fast and perform their Salah.”

And upon this, whilst following the example of RasulAllah ﷺ, today, Saturday 05/23/2020, is the first day of Eid Al-Fitr … So let the Muslims break their fast and because this time is after the Zawaal (الزوال), they will perform Eid Salah tomorrow … And we ask Allah the Almighty to accept our Fasting and our Qiyam, and to make this blessed month a herald for good and blessings for all Muslims. And may Allah the Almighty hasten for the Muslims the establishment of their Khilafah, and heal them from every pandemic, so they can be comforted in this World and the Hereafter and Allah is Possessor of all Bounty, Al-Azeem.

May Allah (swt) accept obedience, All-Praise to the Lord of all Creation.