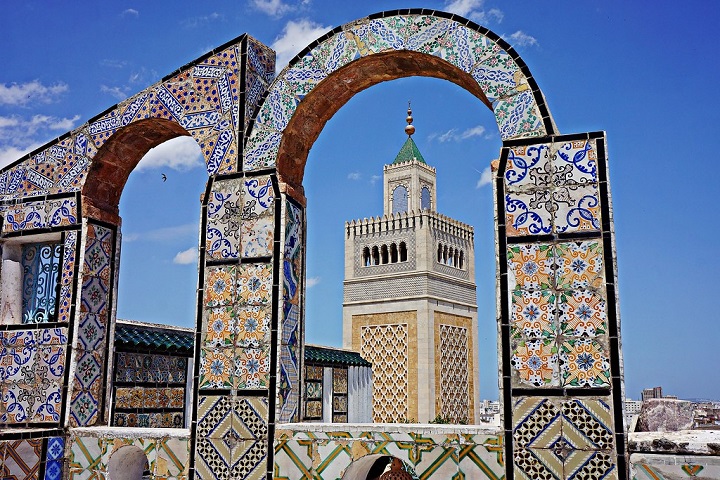 “[All] praise is [due] to Allah, who has sent down upon His Servant the Book and has not made therein any deviance. * [He has made it] straight, to warn of severe punishment from Him and to give good tidings to the believers who do righteous deeds that they will have a good reward” [Al-Kahf: 1-2]

We address you at a time when you are fed up with this corrupt system and have lost your confidence in politicians, parliament and governments. We know that you were not happy about what happened on July 25, except for getting rid of the government of incompetence and treachery, the parliament of corruption and clownery, and the weak and miserable secular political parties. Or so you think. Did we really get rid of the miserable corrupt system?

– Fighting corruption, which he reduced to corrupt people, which means that the solution, according to the president’s logic, is that punishing the corrupt will remove corruption.

– Changing the form of government from parliamentary to presidential. Considering that the parliamentary form was not in line with the nature of the Tunisian political scene, and we all remember that the president called for the restoration of the 1959 constitution, forgetting the woes we experienced as a result of that constitution.

– Changing the electoral law, in a way that prevents small parties (in size) from reaching Parliament, limiting them to two or three parties that control decision-making and legislation.

This path is dangerous, and its danger lies in two matters:

– It preserves the democratic capitalist system that makes the powerful few control the fate of the people. They, through their “legal” funds bring whomever they want into the Parliament, to legislate for them according to their interests, so that the great injustice continues of removing Islam and its wise and just rulings from governance and legislation.

– This path hides Tunisia’s great problem, which is foreign intervention in the self-determination of Tunisians.

The problem that Tunisia suffers from and the cause of all its crises, is the interference of the kaffir colonial powers in the country’s affairs since the 19th century, since they imposed the era of safety, and after that the 1861 constitution, which was a prelude to French colonialism.

The colonial intervention continued at the time of Bourguiba, the British agent, whom they replaced with Ben Ali, but they were surprised by the revolution; they attacked Tunisia, claiming their support for the people and their choices. However, they replaced new agents with the old ones and continued their interference in Tunisia’s affairs. Have things changed after July 25th?

You all witness the extent of foreign interference in Tunisian affairs. The biggest and most dangerous problem is that these interventions is accepted by all the political class, including President Kais Saied. You all know that all the secular parties (Ennahda Movement, Free Constitutional Movement, Qalb Tunis, Al-Tayyar, Tahya Tunis, and others) are all in contact with foreign embassies. They each have a European master whom they obey, serve, and are strengthened by. As for President Saied, you all heard him deny that France colonized Tunisia, you all heard him glorifying French laws and you all saw him obey the instructions of the presidents France and America with his head bowing down. They contact him daily, ordering and forbidding him what to do in the Tunisian affairs, while he obeys them, receives their delegates, seeks their pleasure and reassures them… why? What is America, France and Britain’s business in our country, and in how we live? And why does the president allow them to do this? Wasn’t he able to apologize for meeting them? Or could he not dare to? And why does the President allow their delegations to meet with whomever they want? Aren’t foreign affairs the remit of the president? Were the ambassadors (of Britain, France and America) prevented from roaming across the country?

In this context, we address with this call:

1- To the Men of Tunisia… its Scholars and Imams of the Pulpits:

You know that the corruption in Tunisia is a “legal” corruption, and it is the corrupt laws that acquitted the senior corrupt who plunder the country’s wealth legally. It has acquitted many organizations that receive foreign funding, because the law allows them to receive foreign funding, so they started to roam happily in the country serving the interests of foreigners legally through the man-made laws that they impose in Parliament and are enforced by the executive authority.

They will occupy you with thousands of cases of corrupt people, and they will steal your lives in pursuing sub-issues that will not end or reduce corruption, as long as the laws are set by humans, corruption will continue and spread. Yes, they will distract you from confronting the colonialists and their meddling with Tunisia and its systems (including the judicial system), because the law does not criminalize foreign interference.

You read in the Book of Allah that there is no ruling except by Allah Alone, and that whoever rules by other than what Allah has revealed is either a transgressor, oppressor or a kaffir. You also read in the Book of Allah that submissiveness to the kaffir and befriending him is one of the greatest crimes. The Muslims are waiting from you a word of truth, and the word of truth today is that only Islam will save Tunisia; when its rulings are implemented in governance, politics, economics and education. The country is in fatal crisis, its enemies are roaming all over the country and the colonial kuffar are brazenly asking for the exclusion of Islam and ruling by kuffr (man-made law) and they are asking us to surrender to their will. Isn’t it the time to be serious? Isn’t Al-Izz bin Abdul Salam among you? Who confronted the oppressive rulers and unified the word of the Muslims, and achieved clear victory over the aggressors kuffar at his time?

O Scholars, today is your day, we do not need from you anything but a word of truth, so declare it on the pulpits. Call all people to rally around you to establish a strong state based on the belief of Islam and its pillars are its just rulings. And that will only happen in a state in which the ruler is a successor to the Messenger of Allah; who will be given a pledge by the people to look after their affairs and rule them by what Allah has revealed in His Noble Book.

2- To the Honest and Loyal Security and Military Leaders

You are the most knowledgeable of people about politicians’ betrayals, although we know them by analyzing and following up their words and deeds, you see them with your eyes day and night, you see everyone who frequents the embassies and you know all the movements of foreign ambassadors and who they meet and with who do they conspire. Indeed you know and witness this, so until when will you remain silent and subjugated?

– Not providing protection to all those who deal with hostile countries (especially America, Britain and France) and to prevent them from such suspicious meetings.

– And to reject all cooperation with those countries and demand the reversal of the corrupt agreements made by the agents, the so-called security cooperation agreements, the agreements concluded by Britain, especially with the Ministries of Defense, Interior and Justice, and the unjust military agreements with America. Refrain from participating in their military exercises.

O Our People and Loved Ones in the Land of Zaytuna and Qayrawan (Kairouan):

The issue today and the knot of knots and the root of every evil and calamity in Tunisia lies in two matters:

– The second is the insistence on removing Islam and its rulings and implementing strange Western laws.

Our first duty today is to liberate ourselves and our country from Western influence that lies in rejecting their interference in our affairs and uprooting every politician (ruler or non-ruler) who deals with them or accept their intervention, because had it not been for the conspiracy of the traitorous rulers to Allah and His Messenger, America, Britain or France would not have shown greed for our country and resources.

The duty is to reject the democracy of the West by which it they have enslaved us, and to adhere to our great Islam, and its rulings and solutions for all matters of this world and the Hereafter. It will remove the hardship from us and elevate us from being at the tail of the nations to being leader of humankind, by carrying the message of Khair (Islam) and Jihad. This is only possible by establishing the strong actual state that the Messenger (saw) established in Medina for the first time, and that is by choosing a caliph who would rule by Allah’s law and lead us to liberation.

And let our trust be in Allah Ai Qawi Al Aziz, for He is our Protector, He is the Best Protector and the Best Supporter, And Allah’s saying is sufficient for us:

“O you who have believed, if you support Allah, He will support you and plant firmly your feet. * But those who disbelieve – for them is misery, and He will waste their deeds. * That is because they disliked what Allah revealed, so He rendered worthless their deeds. * Have they not traveled through the land and seen how was the end of those before them? Allah destroyed [everything] over them, and for the disbelievers is something comparable. * That is because Allah is the protector of those who have believed and because the disbelievers have no protector” [Muhammad: 7-11].