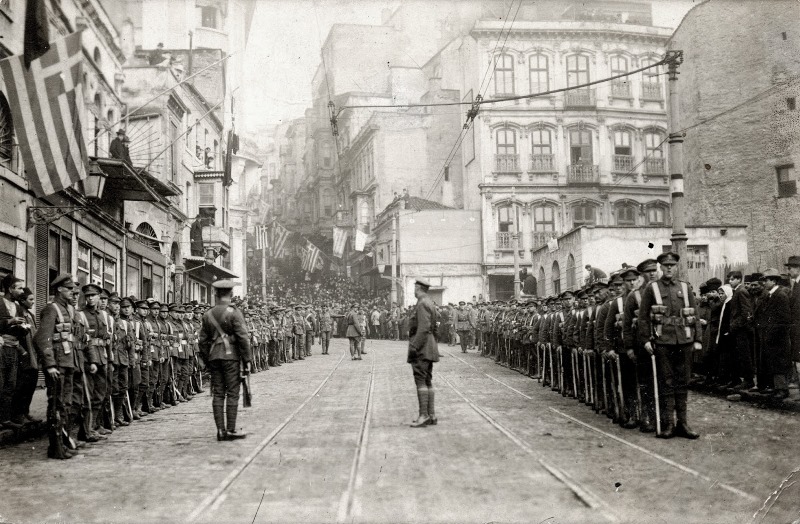 On the 97th anniversary, the Muslim world is in a state of flux. After decades of subjugation, the Muslim ummah is taking its destiny into its own hands and attempting to break the shackles that have for long held the Ummah in chains.

On Monday, 3rd March 1924 (28th Rajab 1342 AH), the world woke to the news that Mustafa Kemal in Turkey had officially abolished the Khilafah. That night Abdul-Mejid II, the last Khaleefah of the Muslims, was bundled in to a car with a suitcase of clothes and money and was exiled from Turkey, never to return. Turkey’s independence was officially recognised with the implementation of the Lausanne Treaty signed the year before on 24 July 1923. Britain and its allies withdrew all their troops that had occupied Turkey since the end of the First World War.

Today’s situation in the Muslim world of division, poverty and oppression is a direct result of the absence of the Khilafah and the targeted policies of the West, British Prime Minister Henry Bannerman outlined Western policy in 1906: “There are people (the Muslims) who control spacious territories teeming with manifest and hidden resources. They dominate the intersections of world routes. Their lands were the cradles of human civilizations and religions. These people have one faith, one language, one history and the same aspirations. No natural barriers can isolate these people from one another … if, per chance, this nation were to be unified into one state; it would then take the fate of the world into its hands and would separate Europe from the rest of the world. Taking these considerations seriously, a foreign body should be planted in the heart of this nation to prevent the convergence of its wings in such a way that it could exhaust its powers in never-ending wars. It could also serve as a springboard for the West to gain its coveted objects.” As much as the West brushes over such history, Britain and France divided the Muslim world through the construction of artificial borders which crossed both ethnic and sectarian lines, and this was to ensure the Muslims will forever remain divided.

Both Britain and France left individuals and minorities in power who would forever be reliant upon Western patronage. David Fromkin, Professor and expert on Economic History at the University of Chicago explained this: “Massive amounts of the wealth of the old Ottoman Empire were now claimed by the victors. But one must remember that the Islamic empire had tried for centuries to conquer Christian Europe and the power brokers deciding the fate of those defeated people were naturally determined that these countries should never be able to organize and threaten Western interests again. With centuries of mercantilist experience, Britain and France created small, unstable states whose rulers needed their support to stay in power. The development and trade of these states were controlled and they were meant never again to be a threat to the West. These external powers then made contracts with their puppets to buy Arab resources cheaply, making the feudal elite enormously wealthy while leaving most citizens in poverty.”

With the Khilafah gone and many considering the Muslim lands independent from colonialism, the ummah experimented with nationalism, patriotism, socialism, democracy, free markets and dictatorship. All were stunning failures and merely continued the impoverishment and subjugation of the Muslim lands. With the fall of the Soviet Union in 1991 and the end of communism, hostilities between Islam and the Capitalist West become clear to all.

Despite such colonial onslaught, Muslims across the world did not abandon Islam. Despite the best efforts of the West in the Muslim lands, the Ummah did not give up the social system of Islam. The Ummah actually preserved much of Islam and did not abandon it in the face of hostility even though its understanding of these concepts was not always clear. What happened in the 21st century is the relationship between the ummah and its rulers became so wide that such rulers became even more distant form the people. The rulers rejected the Islamic culture and adopted the Western culture and the Western agenda. It became obvious to all and sundry that the rulers and the Muslims were diametrically opposed to what should be the direction of the Muslim lands. The Muslim rulers, put in place to stop any Islamic revival, became trapped between subservience to America and the West and fear of removal by their own people.

Today, under a plethora of secular models, the people of the Muslim World have no political rights, and they endure crippling living standards due to high prices and even higher taxes, and have zero international influence. Yet despite this tragedy, some in the Muslim World, backed by their supporters in the West, still believe that a reformation of a secular constitutional order, the imposition of Western friendly leaders and a continued commitment to the same foreign policy that has long marginalised the Muslim world are the way to proceed. They argue that Islam never defined a political system and that the Khilafah is not the only system of Islamic governance.

After 97 years the Western constructed architecture of supporting, funding, arming and defending dictator rulers is now falling apart. This space is now the new battle ground. For decades, the despots of the Muslim world have pursued a set of narrow interests which have side-lined their own people: securing the free flow of commerce for the West, fighting against the Islamic revival and standing up for the security of the Jewish entity at the expense of the Palestinians. Yet now, after decades of despotic rule and Western interference, the political situation is in flux.

On the 97th anniversary of the destruction of the Khilafah, the global implications of the Ummah seizing its own destiny have led the West once again to interfere in the region. This is why the West, on seeing the implications of the Arab spring, have been rolling back their support of dictator rulers in return for a more open system – but one that still maintains its interests. They have continued to find individuals and groups who are prepared to represent Western interests in the region.

The dilemma the Ummah faces in reality is the continued foreign interference from the West and traversing the obstacles in order to establish Islam, which is indigenous to the region, whilst many in the West and the East argue that true Western values have not been tried correctly in the Muslim lands and giving them an opportunity is the future of the region. Case studies form the cradle of civilisation in the West show a deluge of problems, from political apathy, permissiveness in society, and sexual crimes. All this has taken place in what many call the post-modern world where capitalism has faced no challenges ever since the demise of communism.

We also find Western societies unable to convince those who have migrated and settled in places such as Paris, Berlin, Rome and London of their values even though many arrived on the European plains over 50 years ago. This has bred an atmosphere of forced assimilation, but also shows the failure of secularism to encompass different peoples.

We ask Allah (swt) to make this the last anniversary of the destruction of the Khilafah and to bless the Ummah with the prophecy of the prophet ﷺ when he said: «ثُمَّ تَكُونُ خِلَافَةً عَلَى مِنْهَاجِ النُّبُوَّةِ» “…Then there will be a Khilafah Rashidah according to the ways of the Prophethood.” (Musnad Imam Ahmad (v/273))