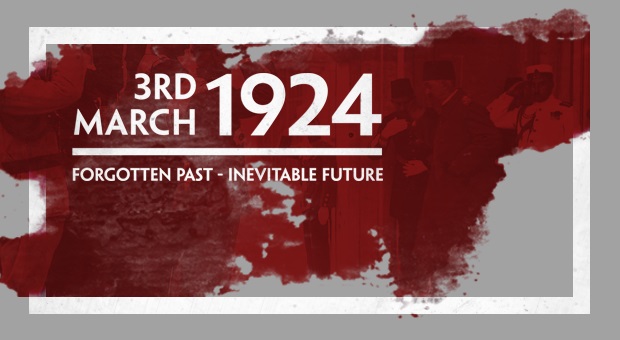 The first Islamic State was established by the Prophet Muhammed ﷺ himself, in Madina Munawara in the 7th century. Based on monotheism it united people of different colours and creeds and eradicated status inequality. It eventually came to be embraced by many nations and peoples. At its height it stretched from Morocco and Spain in the west, to the Philippines in the east, from the Steppes of Khurasan to the north and to the jungles of modern day Congo to the south. The Khilafah went on to become the global superpower.

The Western colonial powers felt threatened by the expansion and might of the Khilafah state and so began to plot and plan against it. They would only rest at its demise. With the help of their agents they managed to destroy the entity of the Khilafah on the 3rd of March 1924. The loss of the collective leadership of the global Ummah left it without any defence against the many challenges that have emerged in the decades since.

On the 93rd anniversary of the end of the Khilafah, the Khilafah is now a household term, known globally due to the resurgence of Muslims looking to return to Islamic politics. Despite the colonial project which aimed to destroy Islam back in 1924, the Khilafah has outlived Arab Nationalism, Ba’athism and many dictators. The artificial nations created by the Western colonialists for the Muslim lands to identify themselves with, are now melting in the sands they were drawn in.

Today, Muslims all over the world are connected to the global Ummah and are starting to see through the artificial concept of nation states as the de facto way of organising the world. Despite the colonial project to distance the Muslims from the Khilafah; Muslims embrace the idea more and more. This is why the West continues in its colonial project of instilling dictator leaders to suppress the call for the Khilafah in order to halt the flames of change that are burning throughout the Muslim lands.

The Ummah has been on the receiving end of western culture, systems and governance for decades and has seen at first hand their disastrous consequences. The global wealth imbalance, climate problems, political deficit, debt, poverty and social chaos has shown the Ummah that it’s not just the Muslim lands but the whole world that needs an alternative civilisation. Furthermore  the refugee crisis as a result of wars in the Muslim lands, the slaughter of Syria, the abuse and hoarding of the Ummah’s wealth by monarchs, dictator-rulers and corrupt families are just some of the many challenges the Ummah faces.

The Khilafah is not just a state for Muslims but a state for all humans which will put an end to mass migration of people due to colonisation, It will bring about an alternative civilisation for all humans. The Khilafah’s economic system is centred around circulating wealth, ensuring the basic needs of all of its citizens are fulfilled and not allowing the hoarding of wealth by the elite. It has a transparent ruling system that makes accountability of the administration mandatory from an individual to an institutional level. And it has a social system that ensures relationships between people are built upon mutual respect, good deeds and the implementation of Islamic rules in all parts of daily life.

The Khilafah as an alternative civilisation will harmonise the relationship between man and technology and not be held hostage by corporations that use intellectual property rights to hoard progress. Whilst the masses lose confidence in their politicians and the political process the Khilafah will introduce a new politics built upon solid foundations that do not change with the winds. This Khilafah will truly be a civilisation where people will flock to and not be displaced due to tyranny and oppression

Hizb ut-Tahrir Britain is pleased to announce the launch of a social media campaign about the #3rdMarch1924 that will run until the 5th March 2017. During this period we will be sharing various memes, videos and articles presenting the Khilafah, lessons we can learn from the past and how the Khilafah will be an alternative civilisation to Capitalism.

InshaAllah we will also be running a special live Q&A and panel discussion on the 3rd March with Abdul Wahid, Jamal Harwood, Abu Yusuf and Taji Mustafa. Please do tune in on our Facebook page and share your thoughts.

We encourage everyone to participate by commenting and sharing the various content posted throughout this campaign in order to help raise awareness of our glorious history and desire to live under a just Khilafah Rashidah in the Muslim World once again.

May Allah (swt) grant the Ummah of Muhammed ﷺ victory once again.