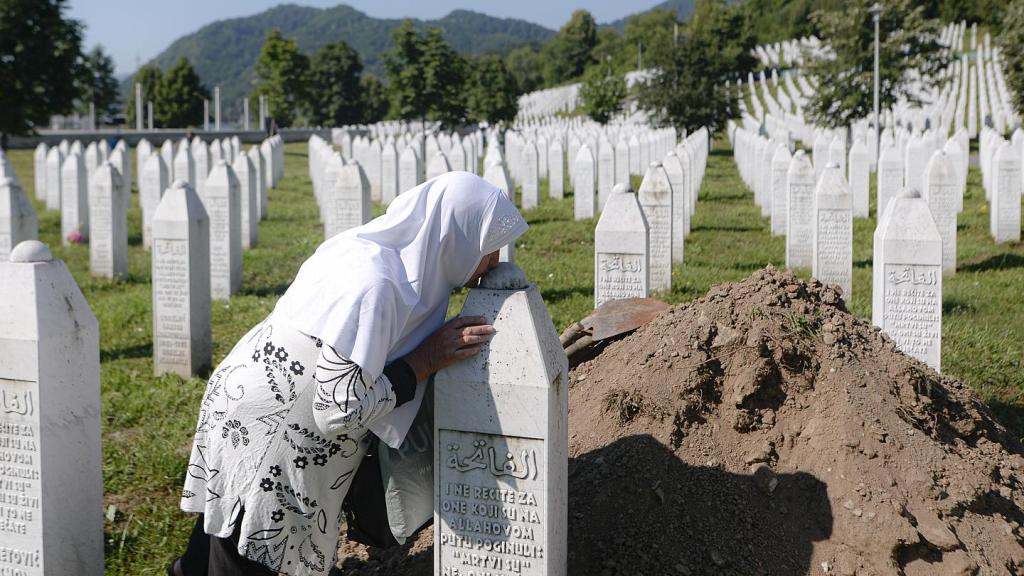 Humankind did not witness more terrible crimes in the modern era than the crimes committed by Serbs in Yugoslavia where they committed various heinous crimes against Muslims that make it as the most terrible in history. These crimes took place under the sight of the whole international community, as pictures and videos were broadcast on television and printed on newspapers on a daily basis. The international community did nothing to support the oppressed in Bosnia and Herzegovina which makes the international community as a whole, including the current agent states in the Muslim world as conspirators and partners of these crimes. Allah (swt) says (in hadith Qudsi): «وعِزَّتِي وجلالِي لَأنْتقِمَنَّ من الظَّالِمِ في عاجِلِهِ وآجِلِهِ، ولأَنْتَقِمَنَّ مِمَّنْ رَأَى مَظلُومًا فقَدَرَ أنْ يَنصُرَهُ فلمْ يفعلْ» “Upon my Mightiness and dignity, I will surely take revenge on the oppressor swiftly and I will surely take revenge on those who witnessed the oppressed while he was capable to support him and he did not do that.”

The crimes of Serbs began in Bosnia and Herzegovina following the dissolution of the Soviet Union, when Macedonia, Slovenia, and Croatia declared their independence. However the Serbs, who were supported by Russia and the crusader Europe, raised the slogan of rebuilding a new Yugoslavia to ensure their domination over other races who had lived in the confines of the Yugoslav Federation since the end of World War I. In this context, Muslims in Bosnia aspired for independence like other nationalities. However, Europe and Russia along with the Serbs deemed it excessive for them on the pretext that the expected Muslim state will be established against the favour of important Serbian presence in Bosnia. They could not allow the establishment of a Muslim entity in the heart of the Crusader world. A bloody war broke out and lasted from 1992 to 1995. According to United Nations Figures, more than three hundred thousand people were killed and hundreds of thousands were displaced and became homeless with the vast majority of them being Muslims amidst the silence of the international community, led by the United States, Europe and Russia.

The kuffar have always utilised the opportunity against Muslims whenever they got as there is no ideological or moral deterrent, not even the humanitarian deterrent present amongst the kuffar. Hence, they go further beyond the limits in their crimes. The Srebrenica massacre was the ugliest of those massacres. It is reported that the Serbian forces led by Ratko Mladic entered the town of Srebrenica on July 11, 1995, after it was declared as a safe zone by the United Nations. During the days of genocide, the Serbian forces have killed tens of thousands of Muslims whose ages were around seven to seventy years old. And that was after the Dutch forces, who were operating there, handed over tens of thousands of Bosnians to the Serbian forces for the slaughtering.

Uglier than the killing was the raping since honor is a priority to Muslims than soul and blood. And the kuffar knew that very well. It was therefore the war in Bosnia was not just a war against sovereignty alone, rather it was a civilizational war between Islam and Kufr at first. It was therefore the Serbs, supported by the Crusader Europe and Tsarist Russia, deliberately violated the honors of Muslims in the most horrific manner. The acts of rape and torture committed against the female Muslim patients inside the hotels and hospitals of Bosnia and Herzegovina were witness to these crimes. Soldiers used rape and various forms of torture as weapons of war. One of the victims who was being held in hospital for her severe illness in 1999 said: “I was raped every night, and it lasted for over a month.” She said: “I was raped by six or seven soldiers every night in a row, sometimes in my hospital bed. I went through all the terrible things, they pulled out my teeth, they beat me, and when the night came I knew exactly what was going to happen to me.” This crime was repeated with more than 70,000 Muslim women, to say the least.

Just as we have been entrusted with the crusade international community, who do not observe any pact of kinship or covenant of protection to the believer and only pretend to prefer and protect the human rights, the international community had to present the scapegoats to punish them in front of global public opinion in order to acquit itself from the sin of its silence and conspiring with Serbs for the crimes. Its mockery was the issuance of life sentence to the former Bosnian Serb military commander, General Ratko Mladic two years before by the International Criminal Court for war crimes in The Hague in former Yugoslavia and its condemnation of the crime as genocide against Bosnian Muslims. And this terrible massacre was reduced to mock trials where criminals were not punished, nor a tenth of the number of criminals were punished, which is in line with their crimes. Therefore, the criminals remained free, nor they were submitted to the persecution, they were not punished and Islamic Hudud were not applied to them until this day.

These crimes and other crimes which the colonial kuffar have committed will not be left with the passing of time like some Western jurists think. Rather the crimes of France in Africa, be it new or old, the crimes of Italy in Libya, the crimes of America in Iraq and Afghanistan, the crimes of China in eastern Turkestan, and the Buddhists in Burma, the crimes of Jews in the Blessed Land of Palestine and also the crimes of Serbs in Bosnia and Herzegovina, all these crimes are preserved in the memories of the Ummah irrespective whether it is long time ago or short while. The Ummah will account its executioners, killers and those who raped their women with the straight measure and it will establish sharia hudud over all of them, by which the hearts of the believers will be satisfied. The Messenger of Allah ﷺ killed all the partners of crime who revealed the awrah of a single Muslim woman amongst the tribe of Banu Qaynuqa and banished the rest of them for their silence over that crime. This is a simple example in the form of punishment that will affect the Serbs, their supporters and those who were silent in their crimes.

Many of the heinous crimes committed on Muslims sides were during the modern era, since the fall of Ottoman Caliphate hundred years before. Perhaps, the sanctities of Muslims are a disgrace to kuffar that made them to go too far by violating these sanctities until this day. The reason for that is the ideological and intellectual decline of kuffar and they carry decadent false beliefs and thoughts. Hence their destructive and inhuman beliefs and thoughts allow them to commit every crime against humanity and Muslims in particular. Hence, there is no impediment for them except by the force that will place them the limits and make them forget the whispers of Shaytan. It is therefore the obligation of establishing the authority for Islam and Muslims is amongst the greatest obligations after bearing the two witness (i.e. witnessing Allah as only god and Muhammed ﷺ as His Messenger). How is it possible without the authority of Islam that protects the foundation (بيضة) of Muslims and the most precious of what they possess in terms of blood, wealth and honor, true to the saying of Messenger of Allah ﷺ «إِنَّمَا الْإِمَامُ جُنَّةٌ يُقَاتَلُ مِنْ وَرَائِهِ وَيُتَّقَى بِهِ» “Only the Imam is a shield, behind whom you fight and you protect yourself with” (Muslim).