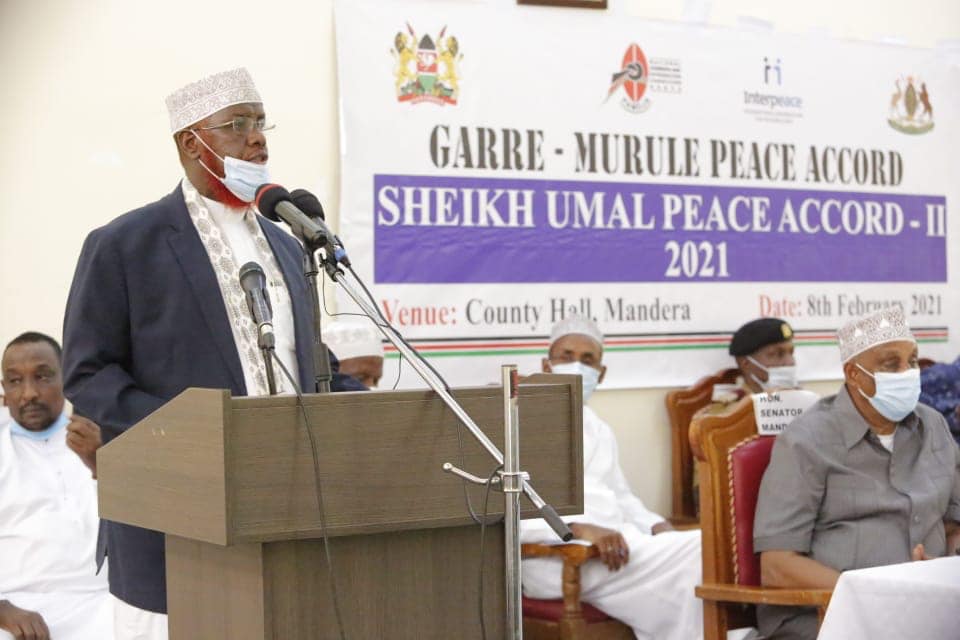 The Garre and Murule communities from Mandera County in Kenya have fought for years over boundaries, pasture and water amongst other vital resources. The two feuding communities were brought together by the National Cohesion and Integration Commission (NCIC) and officers from both the National and County governments. NCIC formed an arbitration committee to bring peace chaired by Sheikh Umal. On Monday, 8 February 2021 the two disputing parties signed a peace unity deal based on a raft of resolutions. Amongst the resolutions were the setting of a fine of 350 camels for aggressors who will breach the pact. In addition, a payment of Sh60,000 ($600) for those found committing the offence of rape. (Kenyan media).

Comment:
The conflict between the two communities has persisted for long and exacerbated by jostling for local political supremacy. This is a second peace accord after the initial one signed in 2005 with no meaningful success! The warring parties are part of the larger Muslim Ummah that has spread across the globe and got corrupted by the sickness of ‘secularism.’ The disease has permeated the Ummah’s thoughts, concepts and actions. Hence, possessing secular personalities devoted to secularism!

Consequently, they have adopted the secular capitalist ideology and its systems to preside over their matters. However, they are contented with being Muslims who perform some spiritual acts! On the other hand, snubbing the sayings of Allah (swt):

“Whosoever does not judge by that which Allah has revealed, such are oppressors.” [Al-Ma’idah: 45].

The above verses and hadith are explicit that the Islamic Shari’ah is the guiding principle. Hence, this latest peace accord is nothing but hot air that will dissipate the moment the ink meets the paper! Since the most fundamental issues have not being resolved i.e. the ideological subjugation by the prevailing secular systems which is the root cause of such conflicts. That is why the mainstream media was captivated by the fine on the rape offence! Subsequently the ‘pro-feminists’ created hullabaloo on social media castigating the same but not discussing about the corrupt and flawed non-Islamic process.

Yes, their decision was right as it is within their democratic right to make such resolutions! But, wrong based on the Islamic Sharia’h. The issue of rape in Islam is an act of dishonoring a woman. There are two opinions in terms of its punishment after sufficient evidence: one- same as the offense of adultery ‘zina’. If the perpetrator is married, he is stoned to death. If the perpetrator is not married he gets one hundred lashes and banished from the land for one year. Second – if the perpetrator used a weapon to commit the offence then he is killed or crucified or hands and feet cut from opposite sides or exiled from the land. One of the two opinions can be adopted with an option for the perpetrator giving the woman recompense ‘dowry’ or not. [Muwatta Malik] and [Al-Ma’idah: 33]. The execution of either opinion is subject to the existence of the Khilafah system which does NOT exist today. So, we must join efforts to resume the Islamic way of life via reestablishing the Khilafah (Caliphate) on the method of Prophethood. It is only the Khilafah that can protect peoples blood, property and honour irrespective of their gender and religion. Being ruled by kufr brings us disgrace in this world and Hereafter.